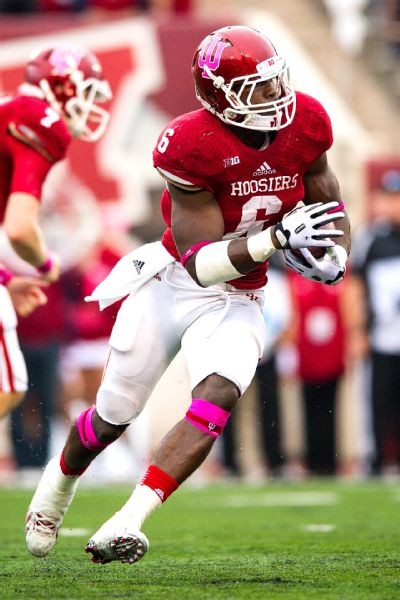 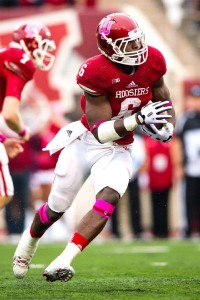 A few months back, Bill Connelly published a piece on Advanced Study Hall titled “Five Factors: College Football’s Most Important Stats.”  As the title suggests, Connelly’s thesis is that football “comes down to five basic things, four of which you can mostly control.”  The Five Factors are:

We’re going to take a look at how IU fared in each of those factors in 2013, and how those factors may change for the Hoosiers in 2014.  In the process, we’ll introduce a few stats that don’t show up in a standard box score, but will be used on a regular basis here.

Now, on to the first factor: explosiveness.

What do you mean, explosiveness?

Sustained offensive success against Michigan State in 2013 was virtually impossible. The 15-play, 80-yard drive just wasn’t happening. To score on the Spartans (or most other above average college football defenses), your best bet was to break one or two big plays. Tevin Coleman didn’t have a great game against MSU (outside of that run, he amassed 15 yds on 14 carries), but his one explosive play put 6 points on the board. That’s the gist of explosiveness: by being REALLY successful one or two times, an offense doesn’t have to execute somewhat successfully 15 times.

How is explosiveness measured?

Yards per play is your basic measure. Points per play can also be used, as it provides some indication of how well the offense is turning explosive plays into points.

Connelly expanded on these concepts by creating a measure he calls Equivalent Points Per Play (PPP). We won’t delve too deeply into the details behind this statistic now, but the general idea is that a 40 yard run from your own 10 to the 50 is worth less than a 40 yard run from the 45 yard line to the opponent’s 5. Connelly refined that measure even further by looking only at a team’s PPP on “successful” plays.[ref] A play is deemed a “success” if the offense gains half the necessary distance on 1st down, 70% on 2nd down, or whatever is needed to move the chains on 3rd or 4th down. Granted, this is somewhat arbitrary – I have a particular problem categorizing a 4-yard carry on first down “unsuccessful” – but you get the idea. [/ref]  This IsoPPP, as he terms it, is meant to show the extent to which a team is successful (e.g. on 1st down, a 5 yard run and a 50 yard run are both successful, but the 50 yard run will increase a team’s IsoPPP because it was much more successful.)

So how much of IU’s offensive success in 2013 can be chalked up to explosiveness? First, let’s look at Connelly’s numbers:

Anytime “1st in the B1G” is associated with IU (and the stat is a good thing), it gets your attention. Based on these numbers, IU was one of the most explosive offenses in college football. The slight difference between their PPP and IsoPPP numbers indicates IU had more unsuccessful plays than other top offenses, but only five teams were better than IU at making the most out of their successful plays.

Sooo…good stuff, right? Absolutely. But there’s more to the story. For that, we’ll look at game-by-game stats:[ref] Unless otherwise noted, all of the stats on this site will exclude “garbage time,” defined by us as any possession in the 1st quarter with a 28 or greater point differential, 24 points in the 2nd or 3rd quarter or 21 points in the 4th quarter. Stats compiled when the outcome is decided are not reliable as indicators of the actual value of the respective teams. We also exclude any games about FCS competition, due to similar concerns over statistical reliability. [/ref]

So what do these numbers tell us that the season-total numbers cannot? First, we can see that the team with the advantage in Points Per Play won each game, and the team with the advantage in points per successful play won 9 of the 11 games.[ref] The exceptions: (1) the Navy game, where Navy methodically moved the chains against a hopelessly confused IU defense, while the IU offense (first quarter excluded), moved the ball in slightly bigger chunks; (2) the Missouri game, where the IU defense played extremely soft in an effort to keep the vaunted Missouri passing game in check, and the IU offense notched three long passing plays, two for TDs – and not much other than that. [/ref]  This phenomenon is not unique to IU. According to Connelly, the team with the higher PPP won 86% of the time.

Second, the game-by-game numbers demonstrate that the IU offense – as good as it was in 2013 – still has room to improve. In 4 of IU’s 7 losses, the IU offense struggled mightily against 2 elite defenses (Michigan State and Wisconsin), and 2 defenses with elite talent, (Mizzou and Ohio State), one of which IU happened to play in the snow without its top running back. [ref] Using Connelly’s Defensive PPP, MSU, Wisconsin, Mizzou and Ohio State ranked 1st, 14th, 39th and 57th respectively. [/ref]  Truly high-level offenses, the Baylors or Oregons of the world, put up points against top defenses, even if they don’t match their normal levels of production.  At this point, becoming the Baylor or Oregon of the B1G is the next frontier for the IU offense – and frankly, given the talent and the current coaching regime, that’s an attainable goal.

Tevin Coleman – Demolition Man [ref] As in, he specializes in explosive plays. [/ref]

Of course, an offense is only as explosive as its players. Very few players in all of college football specialized in explosive plays like IU running back Tevin Coleman. In just 5 B1G games, Coleman recorded touchdown runs of 44, 64, 55, 64 and 75 yards.[ref] Due to an unfortunate ankle injury suffered in the closing minutes of the Illinois game, Coleman missed IU’s last 3 games. [/ref] With runs like that, it comes as no surprise that Coleman ranked 20th in the FBS in another Connelly stat known as “Highlight Yards.” As the name suggests, Highlight Yards are defined as yards gained by a running back after the first five yards.   The theory is that the offensive line is responsible for the first 5 yards gained, and after that, the running back makes it happen. Coleman totaled 562 highlight yards in just 9 games. He did it in just 47 opportunities (running plays of 5 yards or more) for an average of almost 11 yards per highlight opportunity.[ref] Only 3 other running backs had over 10 yds/per highlight opportunity, and nobody else had more than 11 yds/per highlight. [/ref]

Looking forward to 2014, with the departure of Cody Latimer, Kofi Hughes, Ted Bolser and Stephen Houston, stopping Coleman will become a priority for opposing defenses. Coleman’s challenge will be maintaining his production (and staying on the field) despite the added attention. The return of Dan Feeney and Peyton Eckert to the offensive line should assist him in that effort.

The fun part of the post is over. The numbers are ugly:

The difference between IU’s defensive PPP and IsoPPP – which indicates a defense that was relatively better at limiting big plays – meshes with what my eyes saw. In at least a few games, the IU defense managed to keep their opponent in front of them – the Navy, Missouri, Penn St. and Minnesota games come to mind.  It was less a bend-but-don’t-break, and more of a delaying-the-inevitable style of defense.

Once again, when examining at the game-by-game charts above, the Ohio State and Wisconsin games look terrible (and they were), but the reality is that those were just mismatches. Ohio State ranked 5th in Offensive PPP and Wisconsin checked in at 12th. Although we all hope that IU will be competitive with these perennial B1G powers one day, that day was not in November 2013.

On the bright side, IU did hold 6 of their 11 FBS opponents to IsoPPP numbers that were below their season averages. So there’s that.

Looking to 2014 and Brian Knorr’s first season as Defensive Coordinator, I think we can expect a similar attitude towards explosive-play prevention. Knorr’s 2013 Wake Forest defense ranked 15th in Defensive IsoPPP.  With significant experience returning and an influx of talent, Knorr should be able to improve IU’s ability to limit explosive plays in 2014. There’s really nowhere to go but up.[ref] Says every IU fan about their defense pretty much every year. [/ref]