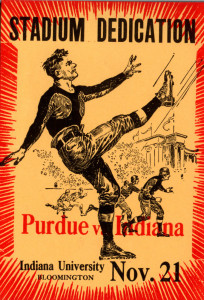 Indiana University has played football for 127 years.  For 67 of those years – ever since the predecessors of the Big 10 and the Pac 10 signed an exclusive agreement with the Tournament of Roses Association in 1947 – a Rose Bowl appearance was the primary goal. In 66 of those 67 years, the Rose Bowl came and went with no Hoosier involvement (unless of course Dick Enberg was on the call).  But in 1967…well, you should just read this article by Dan Jenkins, first published in Sports Illustrated on November 13, 1967.

The article describes a season unlike any other in the history of IU football, one that culminated in a trip to the Rose Bowl (no need to discuss what happened in the game itself. Suffice to say, OJ Simpson didn’t need a Ford Bronco to run away from the IU defense).[ref] Seriously, read the article. Dan Jenkins is incredible and this piece is chock full of great stuff: “PURDUE VOTES DEMOCRATIC” was an actual sign held by IU fans. Easily the worst insult there was in 1967 Indiana. And the article mentions that Wisconsin was winless. Please God let those days return. [/ref] Yes, the 1967 season was unique, but the fact that it happened suggests it can happen again.  47 years later, that season provides a blueprint for IU football in the 21st century: First, head coach John Pont convinced a few key players to come to IU instead of traditional Big 10 powers. A certain level of talent is necessary to compete for a Big 10 title, and Pont reached that threshold. Next, once the coach has compiled the requisite talent, a non-traditional power like IU must be lucky. This is not intended as an insult. Even the best teams need luck (see Tigers, Auburn); IU just needs a little more. In 1967, the ball bounced the Hoosiers way much more often than not.[ref] Luck cannot be limited to bounces of the ball. I would define “luck” as anything outside of IU’s control that can affect the success or failure of the program. Using that definition, the state of the traditional powers of the Big 10 is a component of IU’s luck. In 1967, for example, Michigan went 4-6. Ohio State finished at 6-3. Michigan State struggled to 3-7. Penn State, under promising new coach Joe Paterno, went 8-2-1, but…they wouldn’t join the Big 10 for another quarter-century. While Coach Pont undoubtedly upgraded the talent level relative to those traditional powers, he also took advantage of a down year in the Big 10. [/ref]

For this site, the 1967 season also provides a name. As Jenkins tells it, sophomore tailback/punter John Isenbarger had a propensity for calling his own fake punts, with fairly disastrous results. Isenbarger’s poor decision-making ultimately led the IU faithful to chant/plead “Punt, John, punt!” whenever John lined up to kick it away. We chose that chant – and the story that led to it – as our name for a few reasons: (1) come on, it’s catchy; (2) the fact that this story occurred from the best season in IU football history demonstrates that even when IU is winning, weird and quirky things tend to happen and it’s never easy; (3) it represents maybe the best example of the sense of humor IU football fans must maintain in order to keep their sanity through year after year of disappointment.[ref] There is a better-known story involving two slightly more prestigious programs with a similar name. Don’t worry, “Punt, John, Punt” predated “Punt, Bama, Punt”, the name associated with the famous 1972 Iron Bowl in which Auburn, trailing by 13 in the 4th quarter, blocked two Alabama punts and returned them for touchdowns. [/ref]

As you might have guessed, Punt John Punt is a site dedicated to Indiana University football. We’re (somewhat) recent IU grads who were hooked on the program by the late, great Terry Hoeppner, and who, like most IU fans, are excited about where IU football may be headed under Coach Wilson. Our purpose in creating PJP is to produce content that we as IU football fans would like to read, and generally can’t find elsewhere. In case you haven’t heard, the Internet has changed things, sports coverage included. From a college football standpoint, there is so much more out there than game recaps, player interviews and the standard box score. This site is our attempt to add something beyond the normal IU football coverage. You’ll see some discussion of advanced statistics, modeled after the work done by Bill Connelly of Football Study Hall and Football Outsiders and Brian Fremeau of Football Outsiders and BCF Toys. We’ll do some tactical and strategic posts, as we do our best to emulate the work done most prominently by Chris Brown at Smart Football and Grantland. We also hope to touch on Hoosier football history and analysis of other college football programs and issues, as we attempt to decipher what it takes for a program like IU to succeed.[ref] There will be some discussion of recruiting, but it won’t be a focus, primarily because we feel others are already doing a good job covering it (particularly Matt Weaver over at Peegs) and there’s not much we can add. [/ref]

We hope you like what you find here. Be sure to let us know what you think in the comments. Go Hoosiers.