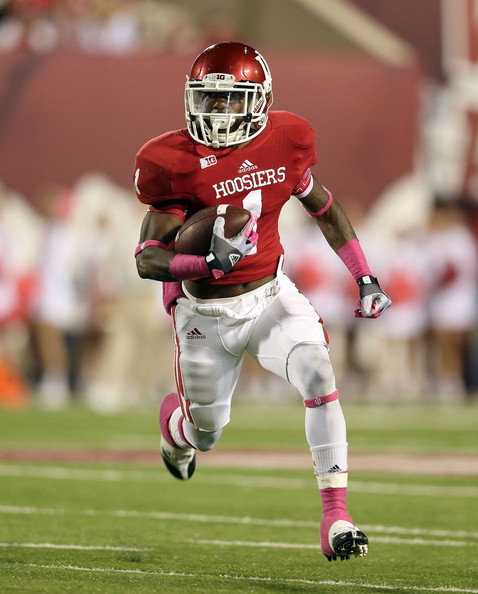 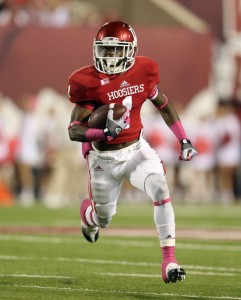 Billy and I take a crack at predicting IU’s 2014 season.  Because if you make enough predictions, maybe you’ll be right once or twice…

Billy: Nate Sudfeld.  With all due respect to Tevin Coleman, the offensive production will come down to the production, and health, of Nate Sudfeld.  It’s time to see what he can do with all the snaps, but mostly new receivers.  No single player is as valuable, and irreplaceable, than the man under center.

Dan: Tevin Coleman. It’s either Sudfeld or Coleman. The main reason to pick Coleman is that, as we’ve discussed, he was the most explosive running back in college football in 2013. Two other reasons: (1) A healthy, experienced offensive line, and (2) Outside of Wynn and maybe Stoner, Sudfeld does not have a proven target at wide receiver. For those reasons, I think Wilson and offensive coordinator Kevin Johns are going to lean on Coleman early and often. I wouldn’t be surprised if Coleman is more involved in the passing game this season as well.

Billy: I think Stoner and Roundtree will probably have better stats, although lower upside, than the freshman.  If I have to pick a player to breakout, I’ll go with Booth although I don’t feel great about it.

Dan: It’s going to be one of three true freshman wideouts: Dominique Booth, J’Shun Harris or Simmie Cobbs. Booth was the highest-ranked recruit and enrolled early, but Harris and Cobbs have received more press conference love from Wilson and Johns over the past few weeks. I’ll go with Cobbs because – at 6’4” – he is Sudfeld’s biggest target.

Lightning Round (where Billy and I briefly answer key questions facing each unit):

Who will catch Sudfeld’s passes?

Billy: He missed 3 games last year and should have an increased workload this year, but I see no reason to think he won’t be healthy.

Dan: Agreed. One ankle sprain does not make him injury prone.

Is the offensive line really good enough to impose its will when IU has a second-half lead in the B1G?

Billy: Considering the teams I expect IU to have a lead on in the second-half, I think so.

Dan: If the offensive line continues to improve under OL Coach Greg Frey, they should be able to control the line of scrimmage against everyone except Ohio State, Michigan State and Mizzou. And then Greg Frey will probably take a bigger job (and he will have earned it).

How will Shane Wynn handle being the clear #1 option?

Billy: I still have some doubts about him being jammed by a CB at the line.  I suspect they’ll move him around enough where he leads the team in targets and yards.

Dan: I think it may take a few games, but he’ll adjust. I don’t think he’ll match his touchdown total from last season (12, including one rushing on a swing pass/lateral), but I think he’ll easily surpass his catches (46) and receiving yards (633) totals from 2013.

How effed are we if Sudfeld gets hurt?

Billy: How effective is Tevin at running the wildcat?

Dan: Lets just say the players will be able to focus on their studies after the Purdue game. Can I revisit that MVP pick?

Billy: What is this MVP of the defense you speak of?  I’ll take Mark Murphy.  Sure, he can drive you crazy sometimes, but with freshman behind him, the Hoosiers need him.  I think he’ll produce as much as anyone unless good pass rusher emerges or Tim Bennett starts catching the ball.[ref] Dan: Is it weird that Billy knows this much about IU football, yet he clearly hasn’t watched the defense play the last three years?? I kid. I hope Mark Murphy has a great senior season. [/ref]

Billy: Antonio Allen.  He showed glimpses last year before his injury at Michigan.  Look for Allen to shine this year.

Dan: I want to be different, but the correct answer is Antonio Allen. He could be the best run-support safety IU’s had in a long, long time. If he can cover (and stay healthy), he’ll have a major impact.

Can the IU defense be average?

Billy: They can be below average which is average at Indiana.

Dan: Another incremental improvement, leaving them just shy of average. Different story in 2015 though.

Will they have a pass rush?

Billy: I think so.  The defense should be more aggressive which will lead to more pressure.  It may also lead to more big plays for the opponent.

Dan: 20 sacks as a team in 2013. Not great. With improvement by Big Ralph Green, Darius Latham and the Mangieri/Shaw combo at Bandit, I think they’ll be significantly better at getting to the QB in 2014.

Will Tim Bennett learn to catch?

Billy: Will they let him wear WR gloves?

Dan: It would be a nice bonus, but he’s valuable either way.

WILL THEY SCORE A TOUCHDOWN?

Billy: The aggressive defense should help, especially for a pick-6, but I’ll say no. Why break tradition?[ref]Unless you are KW and the band marching is interfering with your play calling[/ref]

Dan: Yes, the streak ends on the road at Iowa. Antonio Allen causes a fumble. Tim Bennett runs it in.

Billy: I think you have to go Shane Wynn for no other reason than he has done it before.

Dan: Shane Wynn is the only answer. If only the defense forced more punts…

Billy: Breakout special teams player?  Seriously?  Who knows who will be returning kicks in November.

What can we expect from Del Grosso?

Dan: K Dub hated field goals when he had an All-B1G kicker. Now? Del Grosso goes 8 of 13 for the year.

Billy: He’ll probably let him dress.  He may occasionally let him punt.

Dan: We might rename the site “Punt Kevin Punt” by the end of the season.

Will Nick Stoner catch an onside kick placed right in his hands?

Billy: I’ll blame the triple option for that last year since we can blame everything in the Navy game on that.

Dan: Still not over it. I hope Stoner gets a shot at redemption. 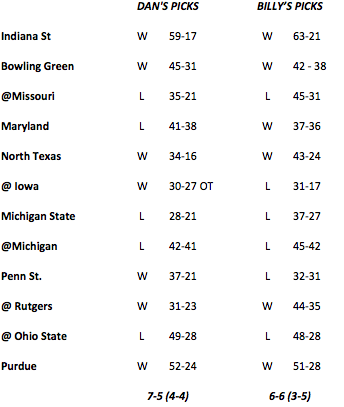