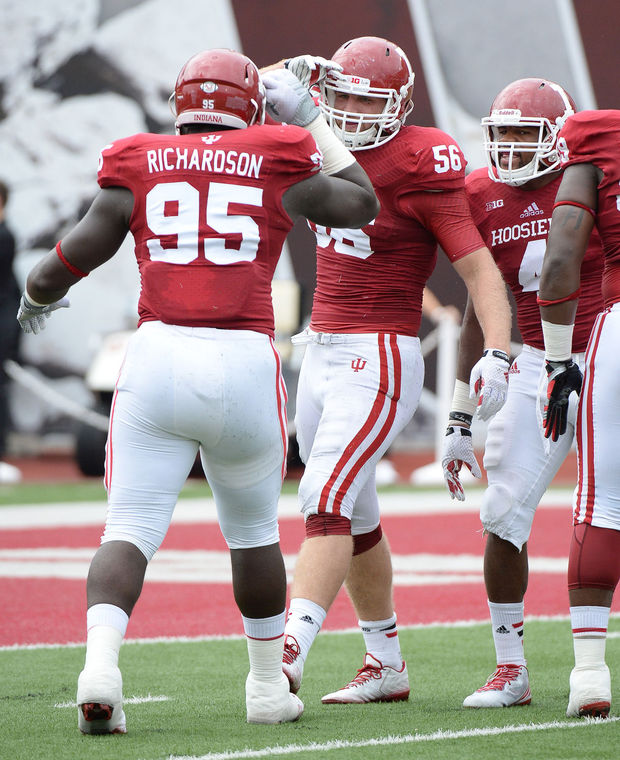 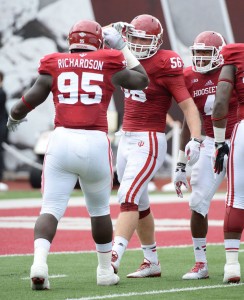 Each week, I’ll take a second look at the previous game and write up my observations.  Up first, the defense.

**DISCLAIMER** I am not now, nor have I ever been a football coach. My playing days ended at the JV level when I realized that what limited athletic ability I had was better suited to the baseball diamond. Any knowledge of modern college football schemes and tactics I have is based on reading the many quality writers out there right now on the subject [ref] Chris Brown at Grantland and Ian Boyd at Football Study Hall, to name a few.[/ref] and on watching a potentially unhealthy amount of football over the years. Given my background, my knowledge here is obviously far from complete. If you think I’m off base on something, by all means enlighten me.

Perhaps more importantly, college football tactics are constantly evolving and each coach employs his own variation based on his background and the personnel available to him.  In particular, while I have some general knowledge regarding the systems and tactics employed by Wilson & Co., I would never claim to grasp their intricacies or the specific manner in which Wilson, Johns, Knorr, etc. implement them. For those reasons, what you’ll see here will be, in large part, positive descriptions of what player lined up where and what they did, with very little normative “he should have done Y instead of X” type of analysis. Some guesswork will be necessary (e.g. what coverage the defense appears to be in based on alignment and movement of certain players), but I will do my best to make it clear when I’m speculating.

With that, let’s delve into the performance of IU’s defense against Indiana State.

By all accounts, new defensive coordinator Brian Knorr wanted to use this game to see what he had. It was not surprising, then, that Knorr’s defense subbed early and often, in an attempt to see as many players as possible in live game action. What we did not see was much variation in the respective numbers of each position on the field. For all but a handful of plays, there were 3 down lineman, 4 linebackers and 4 defensive backs. On a few obvious passing downs, the nose tackle left the game, Mangieri put a hand on the ground and functioned as a DE while one of the DEs moved inside to nose. In one of those instances, Zach Shaw simply replaced Mangieri at Bandit. In another, Kenny Mullen came in as the nickel corner.

Before we get into the positional breakdown, a word on terminology.  As we’ve discussed, Brian Knorr brought the one-gap 3-4 defense to IU.[ref] If you’d like a quick and easy to understand primer on the one-gap 3-4, check out this post on the Strong Football blog. [/ref]  In that system, one of the outside linebackers is frequently referred to as the “Bandit.”  That linebacker lines up on the “boundary” side of the field (i.e. if the ball is placed on the near hash, the Bandit would line up on the near side of the formation, closest to the sideline or boundary). The other OLB is sometimes referred to as the strongside OLB or “SLB” but is more accurately described – at least in Knorr’s version of the one-gap 3-4 – as the Field OLB (we’ll use FLB), in that he lines up on the wide side of the field (i.e. the opposite of the Bandit, if the ball is on the near hash, the FLB lines up on the far side of the formation, where there is more space to cover.)  Generally, the Bandit is considered more of a pass rusher, while the FLB plays more coverage.  At least on Saturday, IU’s safeties and inside linebackers also positioned themselves based on boundary/field.  Therefore, when I describe those positions below, I will use boundary or field, rather than strong/weak or left/right.  IU’s defensive ends, however, seemed to stay put on the left or right side, regardless of boundary/field orientation so I’ll use left and right to describe the DEs. [ref] I couldn’t figure out any pattern with the corners.  Bennett only played the left side, while Hunter, Fant and I believe Mullen all appeared on either side at one time or another [/ref]  I’ll also note any difference between the names I use and what you would see on IU’s depth chart.

Broken down by position, we saw the following, with something like every-other-series rotations, unless otherwise noted:

FLB (“SLB” in the depth chart): Flo Hardin (did not sub out until the last series, when Clyde Newton took his spot)

On all but one occasion, the nose tackle lined up over the center.[ref] On a 3rd and 12 in the second half, the DEs both played in the B gap (between the guard and tackle), Mangieri had a hand on the ground as a “Wide 9” outside of the tackle to the field side, while Shaw played as a normal bandit. [/ref]  The defensive ends played head up on the tackle, unless Indiana State went 5-wide, empty set, in which case the DEs shifted outside the tackle.

The main moving parts in the base defensive personnel seem to be the Bandit and FLB positions. In the first series alone, Mangieri lined up three yards off the line of scrimmage and about 3 yards outside of the DE on the first play, then right on the line of scrimmage with only a yard between him and the DE on the next, and then later was stacked two yards behind the DE, when Indiana State went empty.

At the FLB, Hardin’s alignment varied from as wide as outside of the far hash against trips to as close as one yard outside of the DE. Generally, when Hardin was close to the DE, he was coming on the blitz.

Hardin and the two ILBs generally lined up about 4-5 yards off the line of scrimmage. The boundary safety (especially when it was Allen), often crept up to within 8-9 yards of the LOS. The field safety frequently was at least 10 yards off the ball, but both Murphy and Dutra crept up to the line and blitzed from the field safety spot.  I did not notice any blitzes from a boundary safety.

At corner, I didn’t notice much press coverage, as the corners were normally anywhere from 7-10 yards off. When there was press, it was usually on a single receiver to the boundary side.

All of this, by the way, was against an Indiana State offense that operated mostly with 3 to 4 wide receivers and frequently employed trips (3 WR to one side) to the field side.

While I doubt Knorr wanted to give too much away against Indiana State, I also think he wanted to set an aggressive tone for this defense.  Case in point: on the first play from scrimmage, Knorr dialed up a fairly aggressive blitz from the field side, bringing Mark Murphy and Flo Hardin. It just so happened the Indiana State had a perfect call, a quick screen to that side. This stuff happens. I appreciate the tone Knorr was trying to set.

Knorr also brought Michael Hunter from the corner on at least three occasions, and TJ Simmons and David Cooper blitzed from the ILB spots as well.  I believe the combination of Dutra and Murphy blitzed 3 times from the field safety position.  By my count, Knorr rushed more than 5 only twice, and one of those resulted in a Mangieri sack.

It wasn’t all blitzing though.  Knorr also called plenty of 3-man rush, allowing 8 defenders to drop into coverage.  More often than not, Knorr used a 4-man rush, bringing Mangieri or Hardin in addition to the 3 down lineman.  I only noticed one stunt, and that was on a third and long when Heffern and Latham were lined up over the B gap.  Heffern and Latham pushed wide and Mangieri and Shaw looped  to the inside.

As far as coverage was concerned, the most common seemed to be a Cover Three, with one corner dropping back to cover 1/3 of the field, and the two safeties covering the other 2/3.  That left anywhere from 3 to 5 defenders playing zone in the short to intermediate range across the formation.  It looked like IU played straight man-to-man across the formation with one deep safety (Cover 1) once or twice in the first half, and there were a few occasions where the corner to the boundary side seemed to locked up in man with the lone receiver to that side.  Nothing too flashy about this coverage scheme, but it didn’t need to be. [ref] I believe IU may have employed Cover 4 or Quarters coverage a few times, with both corners and the safeties all responsible for deep routes in their respective quarters of the field, but since Indiana State hardly ever threw long, it was difficult to tell. [/ref]