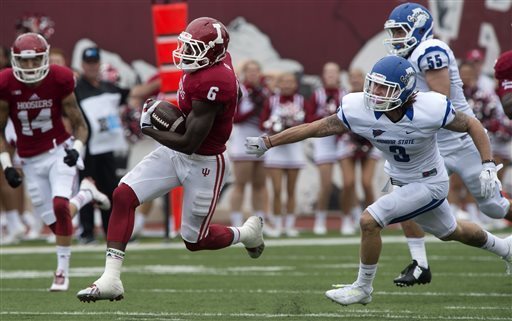 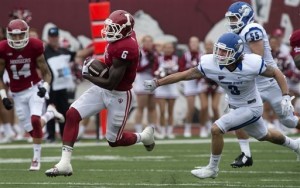 Last week, I took a look at the defense’s performance against Indiana State. Now it’s the offense’s turn.[ref] The same disclaimer applies.  If you think my analysis is off, let me know in the comments.[/ref]

LG: David Kaminski and Bernard Taylor (for one series in the 4th quarter)

RT: Ralston Evans and Dimitric Camiel (for one series in the 3rd quarter)

In 2013, IU’s base personnel group was 3 wide receivers, 1 running back and 1 tight end.  That base utilized a number of formations.  In Week 1, Wilson and Johns stuck with the same plan.  IU played with 3 wideouts, 1 running back and 1 tight end for the entire game against Indiana State, with the exception of one play inside the Sycamores’ 10 in the 4th quarter, when IU went with 2 TEs and 2 WRs.

The running back was placed in one of three spots: (1) traditional shotgun placement, roughly even with the QB, a yard to the QB’s right or left, (2) pistol, 2 yards directly behind the QB or (3) what appears to be an offset pistol, about 2 yards behind the QB and a yard to either side.

The offensive line and running backs did exactly what they needed to against Indiana State: they executed simple concepts and used their superior size, strength and speed to impose their will.  IU ran the ball 69 times and excluding Sudfeld’s scrambles, those 69 runs were really just a few different plays:

(1) Inside zone.  Each lineman steps play side (usually more of a diagonal step, part upfield, part playside), uncovered lineman (those without a defensive lineman opposite them) help covered lineman and then get to the second level. The running back starts on the backside of the play, comes across the quarterback at an angle towards the gap between the playside guard and tackle.  IU’s running backs did a great job of looking for the backside cutback out of this play when Indiana State over-pursued to the playside.  Here’s D’Angelo Roberts doing just that:

The pistol version of the inside zone is essentially the same, but the run is designed to move downhill (because the runner starts directly behind the QB and runs straight ahead.)  Rather than taking a diagonal step, the O-linemen move straight ahead.  As you’ll see in the clip below, this worked pretty well:

(2) Inside zone, with a pulling H-Back to set up the cutback.  Same idea as the inside zone, but the H-back on the playside pulls and kicks out the backside end, setting up a cutback alley.  I’m not sure what IU calls this, but it functions a little bit like a Power O, where the line blocks down and the backside guard pulls to kick out the end.  Two of IU’s TDs had this action. On Tevin’s 73-yarder, Michael Cooper pulled and sealed the backside end, while Coleman set up the run like a normal inside zone and then cut back to a wide open lane.  Here’s what it looked like:

Cooper’s block wasn’t quite as good on D’Angelo Robert’s TD and the run wasn’t as long, but the play was successful just the same.

(3)  Outside zone.  Similar to the inside zone, but instead of taking one step play side and then driving out at the defense, each lineman takes one entirely lateral first step and then tries to get his body between the defender and the sideline.  Failing that, the lineman tries to drive the defender to the sideline, creating a seam for the running back.  The back takes the ball from the QB moving parallel to the LOS and then looks for a lane upfield.  I don’t have a good clip of this from Week 1, but they ran it at least 5 times and, this just in, Tevin Coleman is really, really good at running the outside zone.  He is patient while waiting for a seam to emerge and when he sees it, he hits it fast.[ref] For more info on inside/outside zone runs, check out Chris Brown’s piece from a few years back. [/ref]

I thought Devine Redding had a strong showing in his first collegiate game, but he appeared to make a mistake on an outside zone play in a (relatively) key spot.  On 4th and 1 in Sycamore territory in the second half, Redding tried to force the run to the outside rather than waiting for a cutback lane, ended up outrunning his blockers and getting stuffed.  While the play wasn’t particularly well blocked and ISU did a decent job of flowing to the ball, there was at least a yard to be gained if Redding had been a little more patient.  He’ll learn.[ref] While I’m not sure about the outside zone call on a 4th and 1 with a true freshman running back, this was essentially a preseason game.  Instead of a first down, Kevin Johns and Deland McCullough, IU’s running backs coach, got a teaching moment.[/ref]

(4) “Pin and Pull” flex outside zone.  Similar to the outside zone, but the playside tight end blocks down on the defensive end (the “pin”) and the playside guard and tackle pull around to the outside.  Again, no video of this, but they ran it 4-5 times, with decent success. Tight ends Cooper and Fuchs each missed the pin block once.  Fuchs’ missed block was magnified because it came on 2nd and goal from the ISU 6 in the 4th quarter, leading to a 3-yard loss.

IU has pulled its guards quite a bit under Wilson so you can expect to see more of this as the season goes on.  Who said the running game isn’t fun to watch?!

I have significantly less to say here.  First and foremost, let’s all take a deep breath and remember that Kevin Wilson didn’t forget how to install a passing game during the offseason.  Of the 8 receivers and tight ends that saw meaningful time against Indiana State, only 3 of them (Stoner, Roundtree and Wynn) had seen the field for IU before.  There’s going to be a learning curve.  Indiana State also made a point of dropping defenders and keeping the ball in front of them, which, of course, opened them up to a pummeling on the ground.

That being said, a few thoughts: