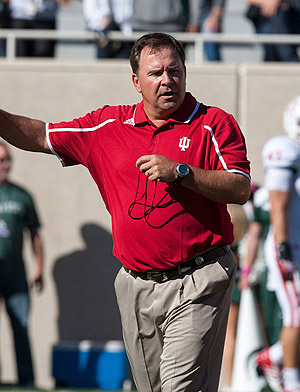 One of the more polarizing strategies employed frequently by Kevin Wilson is his decision to go for it on 4th down rather than attempt a field goal or sometimes even punt.

Is there any merit to this?  John Isenbarger certainly thought so. Either that or he really didn’t like to punt.

First of all, let’s examine what Wilson gives up when the Hoosiers go for it in field goal range. Former kicker Mitch Ewald was one of the best kickers ever at Indiana. For his career, he made 53 of 66 field goals. Roughly 80% of the time, his field goal attempt resulted in points.

Incorporating Ewald’s career field goal rate, we can calculate the expected value at each range of field goal distance. As expected, the longer the distance, the lower percentage and thus, lower expected point value.

For example, if the Hoosiers faced 4th down at their opponent’s 25 yard line and Wilson went for it, did he really give up 3 points? No, because his kicker didn’t have a 100% probability of success at this range. In fact, Ewald’s expected point value at this range was about 1.74.

Another aspect to consider is the effect of a missed field goal or failed 4th down conversion in regards to the opponent’s starting field position.  Despite having the highest expected point value for a field goal, it might be more beneficial to go for it when you are deep in your opponent’s territory.  Either you convert or the opponent is stuck with a long field.

Now let’s look at how the Hoosiers performed going for it on 4th down in 2013.

Coach Wilson’s team went 12 for 24 on fourth downs. They were actually going for it 1 additional time against Missouri but changed course after a Ted Bolser false start.[ref]I bet you thought I was going to say chop block.[/ref]  IU was 11 for 22 in 2012 and 11 for 21 in 2011. Considering the Hoosiers poor 2011 offense was nearly as successful as the superior 2013 offense, I think it is fair to say that Indiana is going to be successful about 50% of the time.   I see no reason to believe this is going to substantially change.

Of those 24 attempts in 2013, some of them came in situations where going for it on 4th down is generally accepted.  No one complains when Wilson goes for it on 4th down late in a game where IU needs to make a large comeback.[ref]See Navy and Mizzou[/ref] Similarly, no one complains when Wilson goes for it in a game that is already decided.[ref]Good: Bowling Green. Bad: Michigan State, Michigan (the last play of the game) and Ohio State.[/ref] Finally, no one is too upset when the Hoosiers go for it on the last play of the half when the Hoosiers are not in field goal position.[ref]See Mizzou. Also, if this intercepted pass was returned for a touchdown, people would probably be mad. Put this in the “most likely not upsetting category.[/ref]

The polarizing plays are those early in a game when Wilson leaves his offense on the field on 4th down instead of attempting a field goal or punting.

Excluding all the above scenarios, I determined there were 12 such 4th down attempts in 2013.[ref]I was certainly lenient on the Ohio State game. I left in one in the 1st quarter with IU down 14-0 and one in the 2nd quarter with IU down 21-0. I could make an argument to exclude both of them, but since they don’t fit the original definition of “garbage time”, I left them in.[/ref]

Eight of the 12 were in the 1st quarter, three in the 2nd quarter, and one in the 3rd quarter.

It is clear that Coach Wilson is trying to score big early in games.  Especially when IU is facing 4th down from a standard down.[ref]4th and 4 or fewer[/ref]

It is difficult to make judgments on the 4th down calls without using the benefit of 20/20 vision. For example, in the 2013 Indiana State game, Indiana went for it on 4th down twice from the ISU 34 yard line. The first was unsuccessful.  If you were against going for it the first time, I am sure you were against Wilson when he left the offense on the field again at the ISU 34. However, this time Tevin Coleman took it to the house for a touchdown.

Even riskier, Wilson went for it on 4th down against Navy in the 1st quarter from the IU 34. Coleman didn’t convert and Navy went on to score a touchdown and take a 14-0 lead. It was a lead that Navy never relinquished. However, against Illinois, down 28-21 in the 3rd, Wilson went for it from the same IU 34 yard line. Tre Roberson converted to keep alive the drive that later scored a touchdown to tie the game.  Indiana went on to take control of the game and won.

What makes the most sense to me is going for it deep into opponent territory when facing 4th and short. Against Bowling Green last year, Indiana attempted runs on 2 separate 4th down attempts from the BGSU 1 yard line. They were unsuccessful on both. However, each drive pinned the Falcons deep in their own territory.  Maybe at 4th and goal from the 5 you kick the field goal, but from the 1, you go for it.

In fact, Bill Connelly’s expected point value from your own 1 yard line is -1.39 meaning, on average, the team with the ball can expect to be outscored by 1.39 over each team’s next drive. Even if you go for it and fail forcing your opponent to start at the 1 yard line, you can still expect to outscore your opponent over each of your next drives.

With such a premise, unless you are facing 4th and long, why would you kick a field goal for 3 points then be forced to kickoff and have a team start at the 25 yard line? It makes more sense to try for 7 points and if you fail, your consolation prize is your opponent needing to travel the length of the field to score.[ref]If you watched the Colts/Broncos game, you’ll remember the 4th and 1 on the goal line that Luck was stuffed.  Denver took over, got 1 first down, punted, and the Colts got a FG their next drive.  Even the curmudgeon Tom Coughlin went for it yesterday on 4th and goal from the 1 in the 2nd quarter.  The  Giants scored.[/ref]

Frankly, Aaron Del Grosso has a leg[ref]As evidenced by his touchback percentage[/ref], but accuracy is still a question. Wilson seems rather annoyed settling for 3 points. He’s certainly not going to be pleased with missed field goals. Considering he hasn’t deemed a kicker to be scholarship worthy, I think Wilson is completely content going for it on 4th down.  Especially on 4th and 5 or less.

As we saw earlier, Indiana averaged 4.9 points per possession when reaching the 35 yard line last year. In order for Indiana to average this 4.9 points per possession, the Hoosiers cannot be content to settle for 3 points. To quote Bill Connelly, “field goals are failures — or at least, field goals are an admission that you’ve already failed and you have to salvage points — but three points are still better than zero.”

Even at a roughly 50% success rate, scoring 7 points in two drives[ref]A touchdown and a turnover on downs[/ref] is still better than scoring 2 field goals. Sure the Hoosiers could succeed on 4th down and fail later in the drive.[ref]Like when they converted against Illinois, but still fumbled later in the drive[/ref] But they could also miss the field goal.

Going for it early in the game deep in your own territory like the Hoosiers did against Navy and Illinois probably isn’t the best idea. The risk generally isn’t worth it, although you could argue that the Navy game was somewhat tolerable due to the fact that you couldn’t count on the defense to stop the Midshipmen. Or even slow them down.[ref] It will be interesting to see if Wilson’s 4th down decision-making changes if IU has a competent defense.  Presumably, if you think your defense can actually stop the opponent, you would be more willing to punt it away or attempt a field goal. [/ref]

Kicking a field goal is wise in certain situations, but it is beneficial for Indiana to try to maximize points. While controversial, maybe K-Dub going for it on 4th down isn’t crazy after all.  And maybe John Isenbarger was ahead of his time.