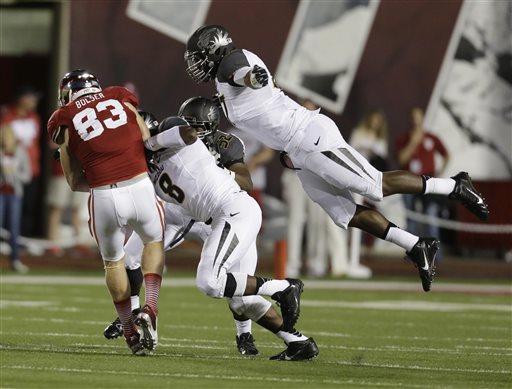 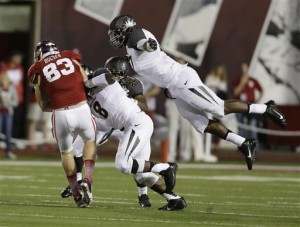 Cylone Cynergy called me out for incorrectly scoring one of his picks last week.  He was right.  So he ends up with 5 correct picks to win for the second straight week.  The guy is the Tevin Coleman of over/unders.  If you think we marked your score wrong, let us know.

Apologies to all who thought they won.  We’ll call this the “2010 Iowa game” week.  You know.  The one where Demarlo Belcher dropped the game winning pass.  The crowd went crazy!  Dogs barked!  Then we realized he dropped it.

The great thing about college football is you only have to wait a week for redemption.  The bad news for Indiana is its opponent this week.  Unlike the over/unders which strive for equal bets over and under, the Hoosiers head to Missouri roughly 2 touchdown underdogs.

Every week, we’re going to post seven over/under “bets.” Six of those over/unders will relate to that week’s IU game; the seventh will relate to something else going on in the B1G that week. You will read them, ponder them, roll them around in your mind for a while and then sometime before that Saturday’s game, you’ll send us an email at puntjohnpunt@gmail.com, tweet us @puntjohnpunt or post a comment with your picks. A simple chain of O’s and U’s will do.

The standings after Week 2 can be found here.

Background: Indiana was called for 4 pass interference penalties against Bowling Green last week.  However, Missouri won’t run at the blitzkrieg pace of BG.  Indiana only had 1 pass interference penalty against the Tigers last year and it was declined.  Kevin Wilson wants the Hoosiers to be more aggressive on defense.  Aggression can lead to interceptions…and penalties (and big plays).

Any positive yardage.  Even one yard.  Even if Tevin takes the handoff from Covington and earns a yard.  So far the Covington experiment has been a disaster with 2 failed 4th and 1 attempts.  It’s been no picnic[ref]Pun intended.  For those that aren’t aware, KW said staff “had a chance at one of our picnics to watch him throw the ball.  Thought he threw too good to play linebacker, so we snatched him over.”[/ref] for the newest Hoosier QB.  If Indiana hopes to win on Saturday, the Hoosiers must covert on 4th and short.  After last week, does Wilson risk further backlash with Covington?  Or does he utilize his quickness with a speed option or (gasp) even let him throw?

Background: Indiana averaged 4.93 points per inside the 40 in 2013.[ref]13th best in the FBS[/ref]  Missouri allowed 3.96 points per trip in 2013. The Hoosiers averaged 3.5 points per trip against Bowling Green.  If Indiana is going to win, they must take advantage of getting into Mizzou territory[ref]And frankly, 4.2 points per trip may not be enough for a victory.[/ref]

Background: Indiana has allowed 3 sacks on the year, all against Indiana State.  Missouri comes in with 12 sacks in 3 games.  The Tigers are led by a pair of defensive ends in junior Shane Ray (5 sacks) and senior Markus Golden (4 sacks).  For what it is worth, the Hoosiers didn’t allow a sack to Missouri last year.

Background: We might as well see how low we can sink with this national Big Ten bashing.  Purdue (1-2) hosts Southern Illinois (3-0).  Northwestern (0-2) hosts Western Illinois (2-1).