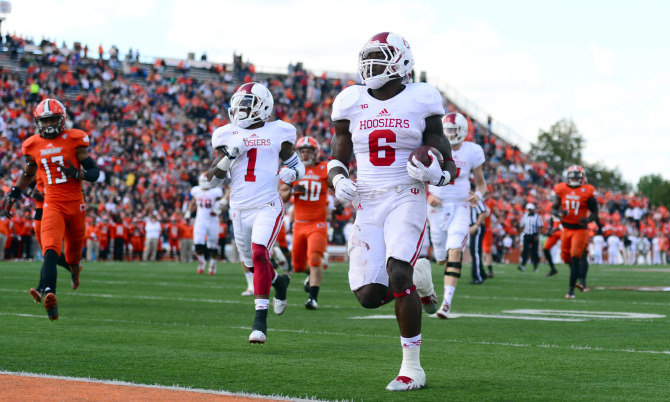 Now for the offense.  In short, Sudfeld carried the squad until Coleman got going.

RB: Tevin Coleman and D’Angelo Roberts (Roberts played every 4th series or so)

TE: Michael Cooper and Jordan Fuchs (Cooper played something like 60% of the snaps)

As expected, the Kevins shortened the bench considerably. Only Coleman and Roberts saw time at running back and Wynn, Stoner and Cobbs played most of the time at wide receiver.

Also, we saw some consistency in the positioning of the wideouts.  Generally, Wynn was split wide to Sudfeld’s left, Stoner was wide to the right, and Harris was in the slot to the field side.

The First Half: Throwing to Set Up the Run

The old saw – because it generally works – is that an offense must run to set up the pass, as the defense will react to play-action and give up the deep ball.  In the spread, however, sometimes an offense is forced to do the opposite.

BG came out with an aggressive gameplan of blitzes and crowding the line of scrimmage, designed to limit Tevin Coleman and force Sudfeld to get rid of the ball. On a number of occasions in the first half, the Falcons were essentially daring Sud and the receivers to beat them deep. The offense was a little slow to react at first and forced a few runs into crowded fronts. Before too long, though, Sud started to pick apart the BG secondary with outs, WR screens and this long post to a single-covered Shane Wynn:

There, BG had 6 defenders on the LOS at the snap, a middle linebacker 3 yards off the ball and a safety creeping up 8 yards off the LOS.  BG’s corners were in man coverage with no safety help.

Once the WR screen was established, the Kevins dialed up a Wilson staple, the fake screen vertical route:

There, Wynn ran a bubble screen action as the inside receiver in trips, while Stoner and Harris ran a scissor route against a single safety.  Sudfeld pumped off the short defenders and the lone Falcon safety had no chance.

You might remember a similar play working against the Spartans a few years back:

Throughout the game, Sudfeld was in sync with his receivers, delivering the ball accurately and on time.  He again displayed improved mobility when throwing on the run and when forced to scramble.  He also orchestrated a go-ahead drive with under 5 minutes to go in the 4th quarter.

If forced to pick nits, Sud missed a few deep balls and panicked when blitzed on a 4th down in the 3rd quarter.  He’ll probably have to complete a few bombs against Mizzou, and he’ll definitely face pressure from Shane Ray and Markus Golden.  That being said, he should go into the Mizzou game with loads of confidence.

The Second Half: The Demolition Man Runs Wild

There were 7 in the box for that run, but the 7th man was set to the strong side, over the tight end. IU ran inside zone left away from the strong side , Spriggs cleared out the DE, Kaminski turned the DT and the weakside linebacker took a bad angle as Coleman stayed playside rather than cutting it back.

Then he did it again:

This time there are only 6 Falcons in the box.  IU again ran inside zone away from the tight end, but this time Coleman cut it back to the left, where Kaminski, Spriggs and Cooper have caved in the right side of BG’s DL and the weakside LB has flowed too far to the playside.  And how about Sud getting a block!

And one more time…

Another inside zone away from the tight end, and again, Coleman cuts it back.  The weakside DE actually beats Michael Cooper’s block to the inside, but his angle wasn’t great and he missed Coleman.  There are technically 7 in the box for this play, but the 7th is a safety 5 yards off the ball and he…umm…doesn’t do much.[ref] Another common thread on Coleman’s three TD runs: the left side of the line (Spriggs and Kaminski), with help from Cooper, cleared the way.  Feeney and Evans are usually strong run blockers too, but at least in the second half, Spriggs and Kaminski seemed to have more success.[/ref]

Hopefully the Kevins will keep this in mind as the season moves along.  Teams may very well load up the box in attempt to take Coleman out of the game.  When that happens, there is nothing wrong with taking what the defense gives them. Sudfeld is more than capable of moving the offense with his arm.

The wisdom of using a true freshman, recently-converted QB who has never thrown a collegiate pass on two 4th-and-1 situations is certainly debatable. What isn’t debatable: the plays were poorly executed.

On the first play, Coleman lined up in the off-set pistol, with Cooper a few yards in front of him as an H-back.  At the snap, Cooper and the line blocked as if it was an outside zone to the boundary.  Coleman, however, took a straight ahead, downhill path.  It looks as if Covington was reading the playside, but there wasn’t anyone unblocked in that direction so I doubt he was actually reading anything (i.e. it was going to Coleman regardless of how it was defended).  The strange thing is that an outside zone necessarily leaves the backside DE unblocked and Coleman’s path took him directly into that unblocked DE.  BG also blitzed a safety from the field side and the blitzing safety and the DE combined to make the stop. I haven’t seen that action from the Hoosiers before.  The idea may be that the DE will read outside zone away from him and follow, leaving a lane for Coleman, but you’d think Coleman would at least fake to the outside if that was the case.  It’s also possible Coleman just ad-libbed. Or Covington was supposed to pull the ball and run the outside zone.  In any event, it was an odd call, regardless of the QB, and the blitzing safety (possibly because BG didn’t think Covington was going to pass) certainly didn’t help.

On the second play, Cooper was lined up as a H-back to the boundary side, and Roberts was lined up to Covington’s right, also the boundary.  The play was doomed to failure from the snap.  Two BG linebackers were lined up two yards off the ball, in line with IU’s right guard and right tackle.  Knowing as we do now that the play was a QB lead off tackle to the right, one would expect a QB to notice the defense’s alignment and audible or call a timeout, but Covington’s been on the job for less than a month now[ref] Not counting high school, and you can make the argument that a high school QB should have known not to run into a numbers disadvantage like that.  Again, he didn’t ask to be put in that situation, and he very well may have been told not to audible.[/ref] so we’ll cut him some slack.  As I mentioned, the play was a simple QB lead, with Cooper and Roberts serving as lead blockers. BG’s DL slanted in the direction of the run, and the entire right side of IU’s line was pushed into the backfield. That penetration threw off the entire play and the attacking outside linebacker helped finish the job.

I doubt we’ll see the Cov Package on Saturday, but if we do, the Kevins might consider mixing in some play-action.  Even with a veteran offensive line and a future NFL running back, IU simply isn’t a team that’s likely to succeed on the ground when everyone knows a run is coming, especially against an SEC defense.