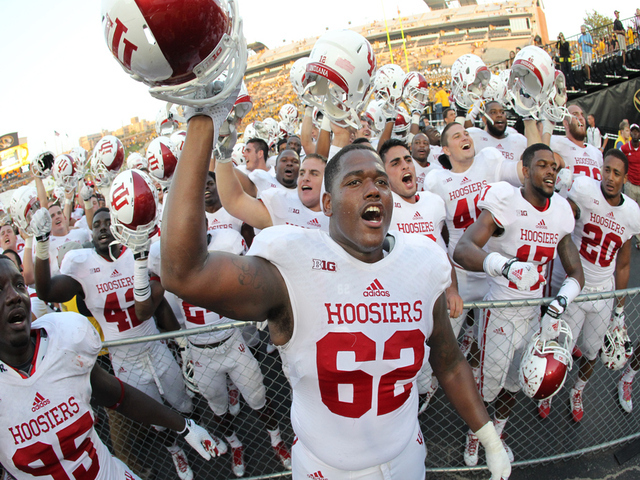 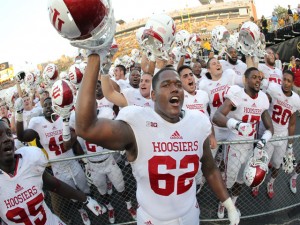 Last Saturday was great.  The Hoosiers won and Howard S. was a perfect 7 for 7 on his picks.

A week after suffering 4 pass interference penalties, the Hoosiers committed 0. The Indiana secondary benefited from an increased pass rush, played great coverage, and even added an interception. We might have to do this one again as Maryland comes in with Stefon Diggs[ref]Mel Kiper ranked Diggs as the 4th best underclass WR coming into the season[/ref], Marcus Leak , and Deon Long.

Eight of 10 got this one right.

In retrospect, we could have listed this as PLAYS in which Chris Covington is quarterback.[ref]And this really is not indicative of Covington as a quarterback. The coaches did not place him into an easy situation in the Bowling Green game. The first play had Coleman going straight into an unblocked DE and the second had Covington running toward a pair of linebackers.[/ref] There were really 3 “Covington play” opportunities against Missouri,[ref]I would define this as 3rd or 4th down and 2 or less yards to go,[/ref] all on Indiana’s 4th series. Sudfeld found Rountree for a 1st down on 4th and 2. On 3rd and goal, Sudfeld was stopped, but D’Angelo Roberts followed with a 1 yard touchdown on 4th and goal. With that kind of production, it doesn’t make sense to use Covington often, but I could definitely see Wilson using him at some point this season.

Indiana scored all their points after reaching the 40 yard line, scoring 4 touchdowns, 1 field goal, and missing 1 field goal. The one miss was following Mark Murphy’s interception. I was particularly pleased with the decision by Wilson early in the 2nd quarter to go for it on 4th and goal from the 1. The move paid off with the aforementioned Roberts touchdown.

Exactly half had faith in the Indiana offense not coming away empty on drives.

With senior Markus Golden sitting this one out due to a hamstring injury, the Hoosiers caught a break. Shane Ray was still able beat David Kaminsky to the inside for a sack of Sudfeld. With Golden out, Charles Harris started in his place and added a sack. Other than a Sudfeld scramble for 1 yard and 2 throwaway passes, the Hoosier offensive line gave the Californian time to find his receivers.

I suspect we might have had more takers had we known Golden was out, but regardless, 6 had faith in the IU offensive line.

Erich Toth rebounded nicely from a poor Bowling Green game and averaged 44 yards on 8 punts, including 1 touchback and 3 that the returner was tackled or fair caught inside the 20. His punts were part of the reason that Missouri often found themselves taking possession with a long field.

Another one where 50% figured Toth would rebound from his rough BG game.

Indiana tight ends have been much more active in the running game than the passing game so far this season. Saturday was no exception. Michael Cooper caught 1 of his 2 targets for 11 yards. Anthony Corsaro and Jordan Fuchs each had one target, but no receptions.[ref]And Corsaro added one false start penalty[/ref]

Five out of 10 had confidence in the Indiana tight ends gaining at least 10 yards through the air.

Except for Michigan,[ref]Hey, that game seems even more winnable now.[/ref] the Big Ten righted the ship on Saturday. On top of Indiana’s victory, all the other teams in the Big Ten won. This includes a 35-13 Purdue victory over Southern Illinois and a 24-7 Northwestern win over Western Illinois.[ref]In case you were wondering, Northern Illinois lost to Arkansas but Eastern Illinois, the pride of Directional Illinois, defeated Austin Peay.[/ref]

There were five selectors that believed that Big Ten schools could handle their FCS opponents.[ref]It’s somewhat sad we had reached that level.[/ref]

The standings after Week 3 can be found here.

Look for Week 4 Over/Unders on Thursday.  Just remember that the Hoosiers are undefeated when someone goes 7 for 7.  So make your picks appropriately.