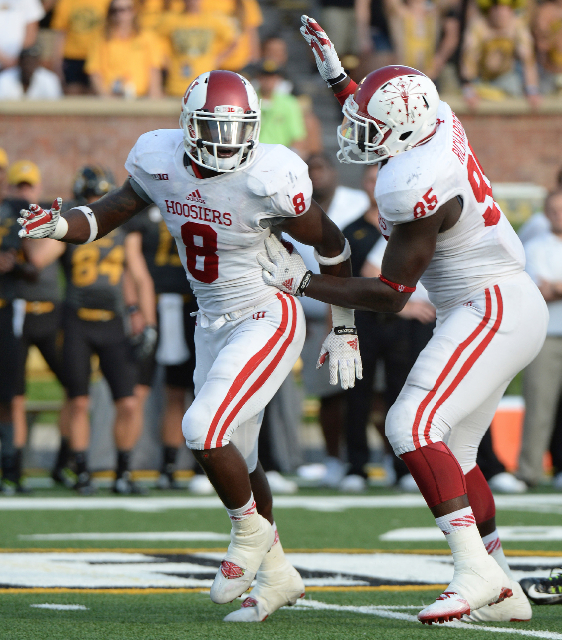 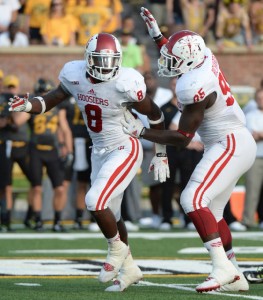 If only every week of defensive film study was this much fun. Seriously, 11 tackles for loss, tons of pressure on Maty Mauk, 24 defensive players recording a tackle. Yep, I could get used to this.

Field safety: (1) Mark Murphy, (2) Chase Dutra and (3) Kiante Walton.  Murphy played about half the time, while Dutra and Walton split the other half.

Similar to what we saw last week, on passing downs, Chris Cormier replaced Green or Hoff at DT, Mangieri played DE, Latham or Richardson lined up at the other DE and Shaw played bandit. The ILBs were generally Oliver and Scales (and after Oliver’s injury, David Cooper filled in). In some instances, Clark or Fant came on as a third corner. One difference from previous weeks was that the 3rd corner (whether Fant or Clark) lined up on the outside receiver and Tim Bennett moved inside to cover the slot receiver.

Because Mizzou ran primarily 4 WR sets (often with a TE serving as one of the 4 WR), IU’s alignment was virtually identical to what it was against ISU and Bowling Green.  IU did show more Cover 1 than it had in the past two games, moving one of the two safeties down to play man on one of the slot receivers, leaving one deep safety in the center of the field.  Like last week. Antonio Allen showed what looked like man coverage on the slot receiver once, only to play a short zone, while Michael Hunter, the corner on the same side, dropped into a deep zone.

The defense’s first play of game set the tone.  Mizzou’s center snapped the ball high (this would be a recurring problem for the Tigers), which threw the timing of the outside zone off just enough to allow Darius Latham to barge through a block on the backside and stop Marcus Murphy for a 3-yard loss.  IU’s front seven would live in Mizzou’s backfield for the rest of the game.

Watching the game in person and then again on film, I really didn’t notice any significant schematic change.  Sure, IU blitzed more  (which we’ll discuss shortly) and that certainly helps to stop the run in certain instances (and not in others, as we’ll see), but IU stopped the run even when there wasn’t a blitz on.

More than any particular scheme or alignment, I think what we saw against Mizzou was the product of a few factors: (1) players becoming more comfortable in their roles within Knorr’s defense, (2) an emphasis throughout the week on playing aggressively, after an utterly passive 2nd half against Bowling Green and (3) more substitutions at linebacker and safety, keeping some key players (Flo Hardin, TJ Simmons, Mark Murphy) just a little more fresh in the 2nd half.

Much was made last week of how passive the IU defense appeared against Bowling Green.  Many equated what they perceived to be Knorr’s lack of blitzing as a continuation of the extreme bend-but-don’t-break style employed by his predecessor.  In reality, Knorr actually dialed up quite a few blitzes in the second half against Bowling Green, but for a variety of reasons, they were ineffective.

Fast forward to last Saturday.  The blitz-mongers among the IU faithful were probably up in arms after Mizzou’s first two offensive possessions, as Knorr didn’t send an extra rusher even once.[ref] This is a good time for me to define “blitz.”  To me, regardless of the front (3-man or 4-man), it isn’t a blitz until the defense sends a 5th rusher.  Thus, in Knorr’s 3-4, if the three down lineman and the bandit rush, that is not a blitz. Likewise, it’s not a blitz if the 3 down lineman and the field outside backer rush.[/ref]  Of course, IU somehow managed to force punts on both possessions without blitzing.  Mizzou’s third possession lasted only four plays and resulted in a long TD pass. Still no blitzes.

Then all hell broke loose.  By my count, Knorr utilized 9 blitz variations a total of 24 times on Mizzou’s last 11 drives.[ref] This number is an estimate. Identifying blitzes on running plays, especially from inside linebackers, is difficult because, at least to my untrained eye, it’s sometimes difficult to tell if a given linebacker was coming on the blitz or simply moving downhill in reaction to the running play. My blitz number also does not include what are commonly known as “green dog” blitzes, where a defender is responsible for covering a running back, and when it is clear the running back is staying in to block, that defender comes on the blitz. Because a green dog is not actually called and depends on the offense’s play, I am not counting it. It looked like TJ Simmons and David Cooper green-dogged on a few occasions against Mizzou.[/ref]  After the first 3 drives, IU blitzed on 24 of 71 plays or roughly 34% of the time.[ref] Including the first three drives, IU blitzed on 29% of Mizzou’s offensive plays.[/ref]  21 of the blitzes involved 5 rushers, while Knorr brought 6 on just 3 occasions.  Knorr seems to prefer sending multiple blitzers at a certain side of the line, as only 2 of the 21 5-man pressures featured blitzers from the field and boundary at the same time.  A description of each blitz (using depth chart position titles), and the amount of times the particular blitz was used are listed below:

This blitz features side-by-side blitzers coming from the field side.  At 1/3 of the total, this was easily Knorr’s favorite blitz to employ against Mizzou.  It was particularly effective when Mizzou had the misfortune of running speed option directly into it or, as happened in the clip below, when Mauk had to corral a high snap, causing a delay in a zone read:

As we’ll discuss later, this blitz is vulnerable to an outside zone in the opposite direction.

While the blitzers here are not side by side like the previous blitz, they still come from the same side with the goal of overwhelming that side of the offensive line.  Tegray Scales was the most common WLB utilized.  Late in the game on a 3rd and long, Scales got to Mauk using this blitz:

Both inside linebackers blitz.  Sometimes both came right up the middle, in what is known as a Double A-Gap blitz, and in at least two instances, the MLB (Simmons or Kennedy) had shifted wide to cover trips and came off the edge (like a SLB normally would) while the WLB blitzed up the middle.

Antonio Allen and Tony Fields both got one opportunity to blitz.  This blitz was only used when Mizzou was in the red zone.

Conceptually the same as the Bandit/WLB blitz, but on the field side.

One of only 5-man pressures used by Knorr that involves blitzers coming from both sides.

Conceptually similar to the SLB/SS blitz in that the blitzers are side by side, with the defensive back on the outside.  Aside from Scales’ blitz on the second to last play of the game, this blitz created the only true free runner on the day (a blitzer that is completely unblocked), but Mauk managed to elude true freshman corner Donovan Clark.

The other 5-man blitz used by Knorr that involves blitzers from both sides.

Like the other 6-man pressure, this blitz was used late in the 4th quarter when Mizzou was right on the edge of the red zone.

Interestingly, one blitz variation that I did not notice is the two OLBs, the Bandit and the SLB, blitzing together.  I’m not sure exactly why that is, other than it makes the defense vulnerable to quick screens and outs to both sides, as the short zone will have to covered by a corner or an ILB.

While the defense’s performance blew away even the most optimistic fan’s expectations, they still gave up a few big plays.  In particular, Mizzou scored two long TDs that could have been avoided.  First, Mauk hit Jimmy Hunt for a 45-yard TD:

On the bright side, note that Shawn Heffern does a great job getting off a block and delivering a clean hit on Mauk.  Chase Dutra appeared to be in cover 2 zone, with Michael Hunter underneath.  A short route holds Hunter, and Dutra tries to cut underneath Hunt’s route, but doesn’t get there.  In the process, he takes himself out of position to even make the tackle.  It’s possible Dutra saw the hit on Mauk and thought the ball would float.  If it had, Dutra likely would have picked it off.  Really, this was just a great throw from Mauk.

Later in the first half, Russell Hansbrough ripped off a 68-yard TD run:

At the snap, SLB Flo Hardin and SS Kiante Walton blitzed from the field, and Mizzou ran an outside zone to the boundary.  As a result, the second level of IU’s defense was two players short of its normal complement.  What’s more, other players were moving at the snap to cover for the blitzers.  Kyle Kennedy, the ILB to the field side, immediately runs in the opposite direction of the run to cover the slot receiver running a bubble screen action, taking himself completely out of the play.  You can’t see it on the clip, but I assume free safety Tony Fields moved from the boundary side to the center of the field, to account for Walton.

All that aside, the play still stood a good chance of being contained because the line was slanting in the direction of the outside zone to the short (boundary) side of the field. Heffern does a decent job of setting the edge, but he allows himself to get pushed out towards the sideline, as do Ralph Green, Nick Mangieri, David Cooper and Tim Bennett, which creates a huge cutback lane for Hansbrough. Because the lane is farther out from the hash than you might want, there is just too much ground for the backside DE, Bobby Richardson and the blitzing Hardin to cover and both just miss the tackle. Ideally, Heffern would have held his ground, forcing Hansbrough to cut back sooner and leaving Richardson and Hardin with more of a shot to shut down the cut back lane. Likewise, one would think that Cooper would be mindful of the lack of backside LB help due to the blitz, and would act accordingly, moving inside out to avoid getting pushed out of the play. Instead, Cooper makes the guard’s block far too easy. Lastly, who knows where Tony Fields was during all of this. He doesn’t even appear until Hansbrough is 30 yards downfield. Assuming he moved into position as the Cover 1 safety, and even if he reacted to the bubble screen action to the field side (all guesses because, again, he doesn’t show up in the clip), he still should have recovered in time to limit Hansbrough’s gain to something less than a TD.

The defense seemed to learn its lesson because later in the 2nd quarter, Mizzou ran the same play and IU again was blitzing from the field with the SLB and a safety. This time, the defensive line did not allow itself to be pushed nearly as wide, which gave Clyde Newton, the blitzing SLB, time to run down Hansbrough after a short gain.