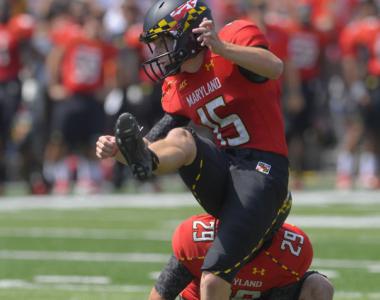 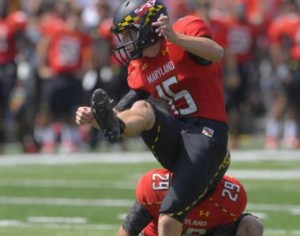 If you are confused by the title, click here.

Last week we identified the WGOH mismatch as the Missouri wide receivers versus the Indiana secondary. The trio of Bud Sasser, Jimmie Hunt, and Darius White finished with 279 yards receiving. While the Tigers did most their damage through the air, Indiana made enough stops, including an interception, for the Hoosiers to pull out the huge upset victory.

This week, Maryland comes to town in what should be a pretty even matchup. The Terps also have good receivers, led by Stefon Diggs, presenting a similar challenge to the Hoosier secondary.

In addition, the Hoosiers rank 9th in the NCAA in rushing yards per game. Maryland just allowed 370 rushing yards to Syracuse. However, 156 of those yards were to mobile Syracuse quarterback Terrel Hunt. Suffice to say, Nate Sudfeld won’t be as mobile. The Indiana running back stable should get their yards, but ultimately this isn’t the White-Guy-On-Hardy mismatch of the week.

That goes to Maryland kicker Brad Craddock versus the Aaron Del Grosso/Griffin Oakes duo.[ref]I know Craddock and Del Grosso/Oakes don’t face off against each other, but it’s my post and my rules.[/ref]

Overall, this is about as close of a matchup as Indiana will see all year. Indiana has the better offense. Maryland has the better defense.[ref]You might be up in arms based on Maryland’s yardage allowed last week. However, it was just 2 weeks ago that IU allowed 571 yards – to Bowling Green. Indiana’s actual defense probably falls somewhere between their last two games[/ref]

If this game comes down to being able to finish drives, particularly late in the 4th quarter, Maryland has the clear advantage.

Brad Craddock is 7 for 7 on field goals with a long of 49, including 5 made field goals between 40 and 49 yards. Indiana kicker Aaron Del Grosso has a sore groin and is 1 for 4 on field goals this year.

I am all in favor of Kevin Wilson going for it on 4th down deep in Maryland territory unless it is 4th and long. However, in situations similar to the one Indiana presented with last Saturday, 4th and 9 from the 24, it would be beneficial for the Hoosiers to have a solid field goal kicker.  Against Missouri, Del Grosso missed the 41 yard field goal and the Hoosiers didn’t end up with any points.

Do you remember how confident you felt with Mitch Ewald or Austin Starr, particularly his junior season?[ref]Was there really any doubt that kick was going in against Purdue?[/ref]  That is what the Terrapins have in Craddock, a Lou Groza watch list selection.  If Maryland’s offensive drives stall around the 30 yard line, the Terps are much more likely to come away with points than Indiana.  And don’t even think about which team is in better shape should they require a last second field goal.

Hopefully, the Hoosier offense and defense can have the type of performance similar to last week, rendering this kicking matchup moot.[ref]Or perhaps I totally jinxed Craddock and he has a terrible game.  That would work too.[/ref]  But in a projected close game, Maryland has the clear special teams advantage.