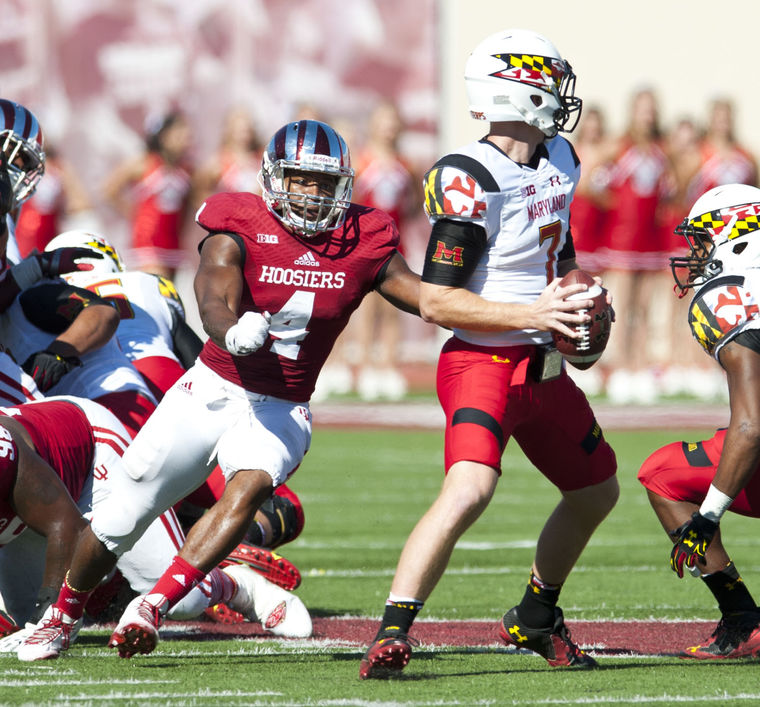 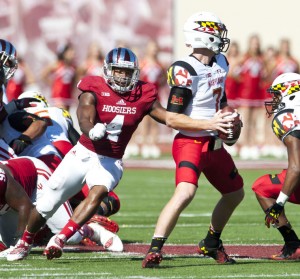 Strap yourself in. This season is going to be a roller coaster ride. (This week is one of the low points)

Boundary safety: (1) Antonio Allen and (2) Tony Fields. Allen played about 2/3 of the time.

Field safety: (1) Chase Dutra (2) Kiante Walton. Dutra played a little more than Walton. Mark Murphy was out with a hamstring injury. He was missed.

One interesting change this week: Adarius Rayner moved to nose tackle from right defensive end, while Ralph Green moved from nose tackle to left defensive end (defensive tackle on the depth chart). Rayner has the size and build to handle the nose, and if memory serves, Big Ralph played some DE in the spring. I’m not sure if this move was a direct counter to something the defensive staff saw from Maryland or if it’s something we’ll see going forward.

We also saw the staff’s response to the first major injuries of the year. To replace Marcus Oliver, we saw more of David Cooper and TJ Simmons at the MLB (field ILB) position in passing downs. Rashard Fant and Donovan Clark took over third cornerback duties for Kenny Mullen, and as we saw last week, when Clark or Fant entered the game, Tim Bennett moved inside to cover the slot receiver.

Soundly Beaten Through The Air

As Billy demonstrated through the numbers on Monday, Maryland had their way with the Hoosiers in the passing game.  Some (maybe most) of Maryland’s success can be attributed to their stellar receiving corps, including at least two future pros in Stefan Diggs and Deon Long.  Some can be attributed to less than stellar play by the defense.  There were many examples.  We’ll focus on a few.

On Maryland’s second TD, Chase Dutra blitzed from the field.  At the outset, it seemed to me that he tipped his hand a bit.  A blitzing safety almost always has to move towards the line before the snap on a blitz, otherwise he likely won’t make it to the quarterback, but the trick is to do so after the quarterback has committed to a given play.[ref] A safety can also bluff a blitz to keep the QB guessing, but I haven’t seen much of that from IU’s safeties yet this season.[/ref]  Dutra’s reveal of his blitz too early ahd had two consequences: (1) it indicated where 6th-year senior QB C.J. Brown should go with the ball and (2) it threw off Dutra’s own timing. Despite that, Dutra still went unblocked and could have blown up the play…but he bit on Brown’s pump fake and left his feet. Brown calmly waited for Dutra to land and threw over him.

Even though the blitz didn’t get home, IU had a shot to break up the pass.  TJ Simmons, playing an intermediate zone, reacted to Diggs’ inside route and moved towards the Terrapin receiver, but he ultimately moved a little too far. Diggs slipped behind Simmons and Brown hit him in stride. Finally, I hate to make this a weekly refrain, but I really have no idea what Tony Fields was doing here. With Dutra blitzing, Fields presumably was responsible for the middle of the field.  Here, he appears to have overcompensated and moved too far to the field side, leaving the middle of the field wide open for Diggs.  Have a look at the 33 second mark.[ref] We apologize for sending you searching through the BTN highlight’s for video.  Maryland doesn’t put out video highlights so this was the best we could do.[/ref]

While Maryland had plenty of success with downfield passing, where they really killed IU was the screen game.  Maryland twice picked up big chunks using a simple play action fake to the boundary, followed by a throwback screen to a wide receiver on the field side.  This play design put IU SLB Flo Hardin and FS Chase Dutra/Kiante Walton in conflict.  In each case, Hardin and the free safety reacted to the run, rendering them a step or two out of position for the screen. And that’s all Maryland’s playmaking wide receivers needed.

The biggest screen pass of the night went to Maryland tailback Brandon Ross.  The play design was very similar to Tevin Coleman’s big gainer last week, with Ross simply flaring out into the flat, with interior lineman out in front.  Tegray Scales and Michael Hunter are blocked fairly easily, while Antonio Allen took an angle that I presume was based on an assumption that Hunter would force the play back inside.  Entirely too easy.  Here it is at the 1:12 mark.

While IU has made strides against the run, the Maryland game (like Bowling Green and Missouri) reminds us that there is still work to be done on pass defense. On the bright side, only 3 of the 8 remaining opponents have passing games that appear capable of exploiting this weakness (Michigan State, Penn St. and Ohio St.)[ref] That’s not to say otherwise weak passing offenses can’t perform well against this defense.[/ref]

Getting Off The Field

This is an issue that has already popped up a few times this season.  Last week, Mizzou converted a 3rd and 17 on the ground.  That could never happen two games in a row…right?

Well, on Maryland’s third offensive possession, after a Nate Hoff sack and an incompletion, the Terrapins faced a 3rd and 17 from their own 18.  They ran speed option to the boundary and Mangieri forced a pitch to the back.  Tegray Scales was blocked wide and out of the play.  Donovan Clark was the corner to the boundary side, and he also couldn’t get off a block.  Only one IU defender was unblocked, and he just happened to be one of IU’s best tacklers: Antonio Allen.  Here, Allen had a chance to make the tackle after only a 10 yard gain, but the Maryland back made Allen miss and picked up the first down.  Maryland capitalized, scoring its first touchdown a few plays later.

And then it happened again.  With Maryland leading 20-9 in the 3rd quarter, IU forced a 3rd and 16 on Maryland’s 47, after Flo Hardin recorded IU’s second sack of the game.  Deon Long ran a 10 yard hitch and Maryland backup QB Caleb Rowe hit him.  That wouldn’t be a problem as long as the corner guarding Long made the tackle after the catch. Here, Michael Hunter[ref] Whose tackling, it must be noted, has significantly improved this season.[/ref] gave too much cushion (even for a 3rd and 16) and afforded Long room to make a move and beat him for the 1st down.  Hey, at least they passed for it this time!  Maryland scored on the next play and that was pretty much the game.

For a look at the offensive side of the ball, click here.