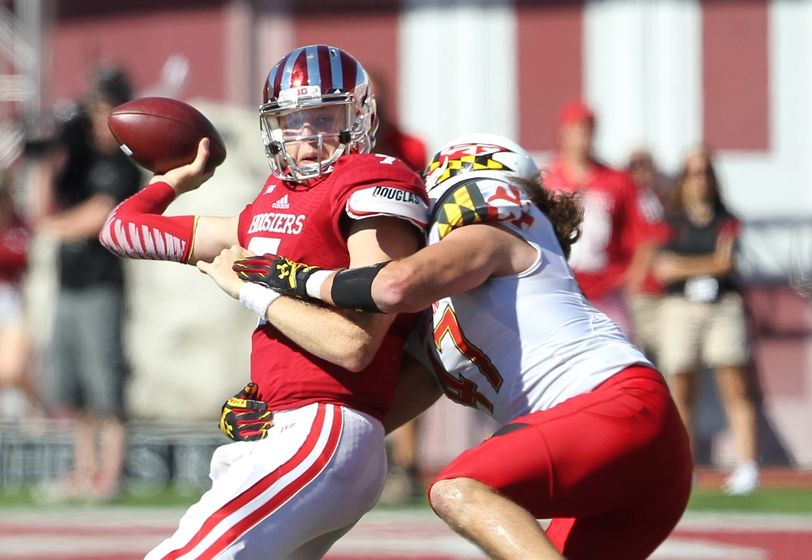 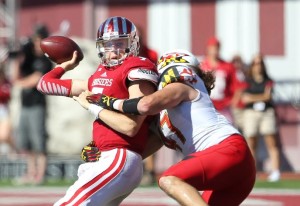 One last look back at the Maryland game.  I know I’m ready to move on to the Mean Green…

QB: (1) Nate Sudfeld and (2) Chris Covington, for one possession in the 4th quarter long after the game was decided.

LT: (1) Jason Spriggs and (2) Peyton Eckert. Eckert took over in the 4th quarter after Spriggs suffered a sprained knee.

Once again, no change in the personnel grouping: 3 WRs, 1 RB and 1 TE throughout, with the exception of a few short yardage situations where a second TE entered.

Sudfeld Wasn’t Great…But He Didn’t Get Much Help

After watching the game again, I can confirm that Sudfeld did not play well.[ref] This is the insightful analysis that keeps you coming back![/ref]  That being said, Sud wasn’t as bad as his sub-33% completion percentage would lead you to believe.

First of all, Sudfeld’s receivers were credited with 3 drops – 2 by the normally sure-handed Shane Wynn and 1 by freshman running back Devine Redding. While they probably wouldn’t be categorized as drops, Nick Stoner, Dominique Booth and J-Shun Harris each let passes that could easily have been caught fall incomplete. If those 6 balls were caught, Nate’s looking at a line of 20 of 37 – over 50%, not great, but far from a disaster.[ref] And I’m not even counting the ball that Stoner caught along the sideline that was called out of bounds and somehow upheld on review.[/ref]

In addition, I counted 4 instances in which Sudfeld was forced to throw the ball away. Assigning blame for a throw-away is difficult and Sud certainly bears some portion of that blame[ref] The rest of the blame can be placed at the feet of receivers not getting open and linemen not maintaining their blocks.[/ref], but I think we would all agree that in most scenarios, a throw-away is preferred over an interception or a sack.[ref] A 4th down is an obvious exception. You’d rather have your quarterback force the ball into coverage and risk an interception for the chance at picking up the first down.[/ref] If we then consider Sudfeld’s throw-aways good decisions and don’t count them against him, he’s now 20 of 33 and moving towards respectability.[ref] Sudfeld was also called for intentional grounding twice.  It’s still better than throwing a pick, but I’m sure the Kevins would prefer Sud avoid intentional grounding where possible. [/ref]

Moreover, a quarterback’s completion numbers will almost always suffer when his team trails throughout the game. As we’ve mentioned before in explaining the difference between standard downs and passing downs, it is generally easier for an offense to succeed on a standard down because the defense does not know if the offense will run or pass. When you team is trailing by multiple scores in the second half – even before we reach garbage time – the defense can be confident that a team will pass because in theory, passing gives the offense a better chance to score quickly. Because the defense knows the offense is going to pass, the defensive line can focus solely on pass rushing and the linebackers and secondary no longer need to respect the play-action fake.

Sure enough, Sudfield was only 5 of 15 in the second half, when IU was down by anywhere from 9 to 25 points.  He threw the interception late in the 4th quarter after the game had been decided.

Certain aspects of Sud’s performance cannot be explained or excused. I counted at least 5 instances where Sud – under no pressure whatsoever – simply didn’t give his receiver a chance to catch the ball, missing high, low, in front or behind.  He needs to clean that  up.  But to put the passing game’s failure on Sudfeld alone is to ignore a number of other factors that contributed to the offense’s poor performance through the air.

A Stubborn Refusal To Give Up On The Inside Run

Last week, I discussed the introduction of the quick toss and the speed option to IU’s running game.  Because they were successful, it stood to reason that we’d see more of the same against Maryland.  And we did, just not to the same extent they were employed against Mizzou.  In the first three quarters against Maryland (when the game remained in doubt), the Hoosiers ran the speed option twice and the quick toss three times.  By comparison, against Mizzou each play was used 7 times.

Was Maryland doing something schematically to take the outside run away? No, not really.  When combined with IU’s 6 outside zone runs, Coleman and Roberts totaled 89 yards on 11 “outside” carries, including Coleman’s 43-yard run that came on a quick toss in the 3rd quarter.  In contrast, IU ran 17 inside zones or traps for a total of 39 yards.  Even if we exclude Coleman’s long run from the outside run total, IU was still roughly twice as successful running to the outside.[ref] Again, only looking at the first 3 quarters here, IU averaged 2.3 ypc on inside runs. Excluding Coleman’s 43-yard scamper, IU averaged 4.6 ypc to the outside.[/ref]

For whatever reason, IU seemed to prefer the inside run last week.  I’m sure the Kevins saw something on film or maybe they hoped they would eventually wear down Maryland’s interior linemen and inside linebackers.  Unfortunately, by the time Cole Farrand and Co. might have started to fatigue, the game was all but over.  As I’ve said before, Kevin Wilson has done more than enough in his time at IU[ref] Not to mention his stints at Oklahoma and Northwestern.[/ref] to have earned the benefit of the doubt.  The Kevins will tweak the inside run game, to be sure, and it will remain a vital part of the offensive gameplan.  But I wouldn’t be surprised if the outside run game ticks back up to the level we saw against Mizzou.