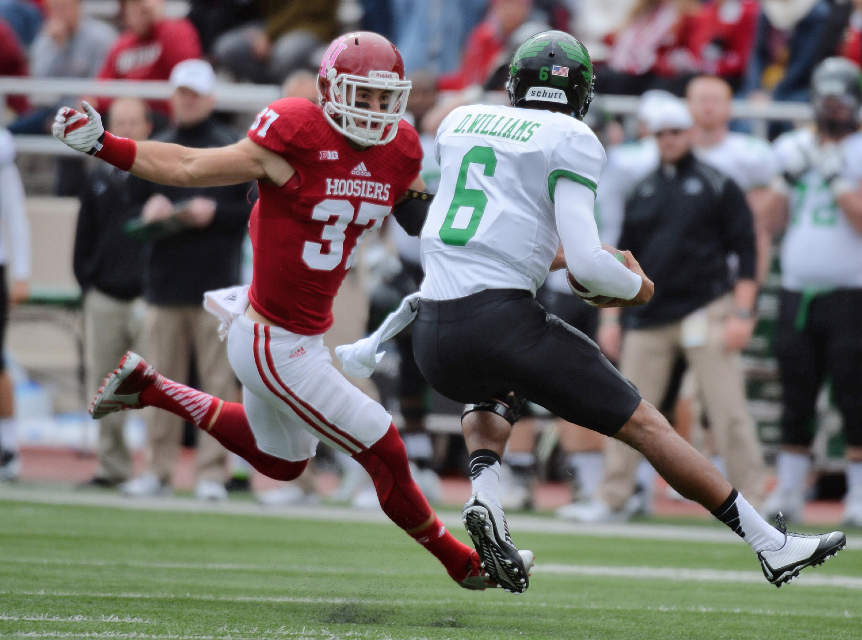 It was an odd week so obviously, the defense played well (don’t worry, I skipped the part where we gave up two touchdowns in 1:28).

Base Defense (starter listed first, generally a 50/50 rotation unless otherwise noted)[ref] The list below excludes players that participated only in garbage time. Based on the participation report, it looks like Noel Padmore, Robert McCray and Jordan Heiderman also saw time, but they did not appear prior to the 4th quarter so they are not listed.[/ref]

CB: Tim Bennett, Michael Hunter, Rashard Fant and Donovan Clark. Unlike in previous weeks, the split between Bennett/Hunter and Fant/Clark was fairly even.

Boundary safety: (1) Antonio Allen and (2) Tony Fields. Allen played about 2/3 of the time.

Field safety: (1) Mark Murphy, (2) Chase Dutra and (3) Kiante Walton. Murphy returned from a hamstring injury and played about half the time. Dutra appeared for 3 series prior to garbage time and Walton played in 1.

Cormier at NT, Mangieri played DE, Latham or Richardson lined up at the other DE and Shaw played bandit. Scales played boundary ILB, with Cooper at field ILB.  As we’ve seen since the injury to Kenny Mullen, when IU added a 5th defensive back, it was either Fant or Clark and Bennett moved inside to cover the slot.

PLAYING ALL THE PLAYERS

This game did not present much in the way of new schemes or tactics from the IU defense so I thought I’d take a moment to discuss what seems to be a fairly unique strategy used by Knorr & Co.: PLAYING ALL THE DEFENSIVE PLAYERS.[ref] I realize this is sort of a Film Study cop-out. Rest assured, the offense did some new and interesting stuff against UNT so that post will be more like the usual.[/ref]   For road games, I actually mean that quite literally.  Against Mizzou, for example, all but one defensive player on the travel squad saw game action.  I can’t say for sure, but from my experience as a relatively serious college football fan, I don’t recall many teams with defenses that rotate their players at this frequency.[ref] For those of you who watched the BTN broadcast of Saturday’s game, play-by-play man Eric Collins was downright SHOCKED that IU was subbing like it was, commenting incredulously more than once that “three-quarters of IU’s secondary is made up of second-teamers!”  If Mr. Collins had spent a little time on PJP, he wouldn’t have been so surprised.[/ref]  I certainly don’t recall an IU team that has.

Take the past few years, for example.  Doug Mallory would rotate the defensive line regularly (like most defenses), would employ a nickel corner on occasion, and rotate the LBs once or twice a half, but he almost never rotated in the secondary.  By contrast, so far this season, the safeties trade off almost every possession (and a 5th safety rotates in as well) and four corners regularly see action.

There are some clear benefits to this strategy.  From a strictly on-field perspective, fatigue should never be an issue with this squad.  Even against the Bowling Green’s of the world, who can run upwards of 100 plays in a game, if the current rotation schedule is employed, no single IU defender will play more than 50 plays or so.[ref] While the rotating was already going on to some extent before and during the Bowling Green game, Kevin Wilson’s post-game comments citing fatigue as a reason for the defense’s 2nd half demise and his opinion that IU “should have played more guys” seems to have kicked the substitutions up a notch.[/ref]  For a team like IU that, despite talent improvements in the Wilson era, is generally still out-gunned, especially in the trenches, having fresh bodies on the field at all times seems like a good idea.

In addition, every snap that IU’s underclassmen play is valuable experience going forward.  To the extent that there is a difference in quality between the younger guys and the veterans[ref] And I think part of the reason they’re doing this is that there simply isn’t a big talent drop-off between the 1’s and the 2’s.[/ref], Wilson and Knorr have plainly made the decision to sacrifice having the best players on the field at all times for the more long-term goal of accruing valuable experience for young players.

Speaking of playing young guys, we shouldn’t ignore the recruiting advantage that comes from a strategy that puts freshmen on the field quickly.  As we’ve discussed before, getting Donovan Clark, Tony Fields, Kiante Walton, Tegray Scales, Greg Gooch, etc. on the field in their 1st year on campus gives Wilson concrete examples when he’s talking to recruits who all want to play immediately.

Of course, there are possible downsides, the most obvious and important of which is taking good players off the field in favor of players who aren’t as talented or experienced.  We’ve seen examples of inexperienced players making mistakes, and we should expect plenty more.  But as these talented young guys gain confidence, we should also see more of what we saw against North Texas: freshmen (true and redshirt) creating the type of big plays that IU’s defense has been lacking for a long time.

You know, big plays like picking off a pass deep in the opponent’s territory after running the entire width of the field. If you’ve been a regular Film Study reader this season[ref] The five of you are the best![/ref], you know I have a bit of a man-crush on one Tegray Scales.  I count myself in good company in that regard, as it seems K Dub’s father is also a big Scales fan.  He had a nice little game on Saturday and was named co-defensive player of the week, along with fellow freshman Chase Dutra.

A few plays to highlight:

In this one, Scales reads run and shows his quickness to get outside and pull down the running back.[ref] Maybe he got away with a horse collar tackle. Whatever. That makes up for the BS roughing the passer called on him against Mizzou.[/ref] At this stage, Scales is at his best against the run in situations like that play, where he’s too quick to get blocked.

But where he really excels is defending the pass:

What you don’t see in that clip is where Scales started on that play.  Lined up in his customary spot as the boundary ILB, at the snap Scales moved to his right to cover a short zone.  When the UNT QB broke from the pocket, Scales was outside of the hash on the boundary side.  In the time it took the QB to roll to the field side and throw back across his body, Scales had covered the width of the field.  Then he managed to actually catch the pass![ref] Tim Bennett, please take notes.[/ref]

While that play demonstrates incredible athleticism, I’m more interested in and excited about what it it says about Scales’ mature-beyond-his-years instincts in pass coverage.  With that skill set alone, Scales will be a valuable contributor for four years.  If he happens to add some strength and develop an ability to fight off blocks, watch out.