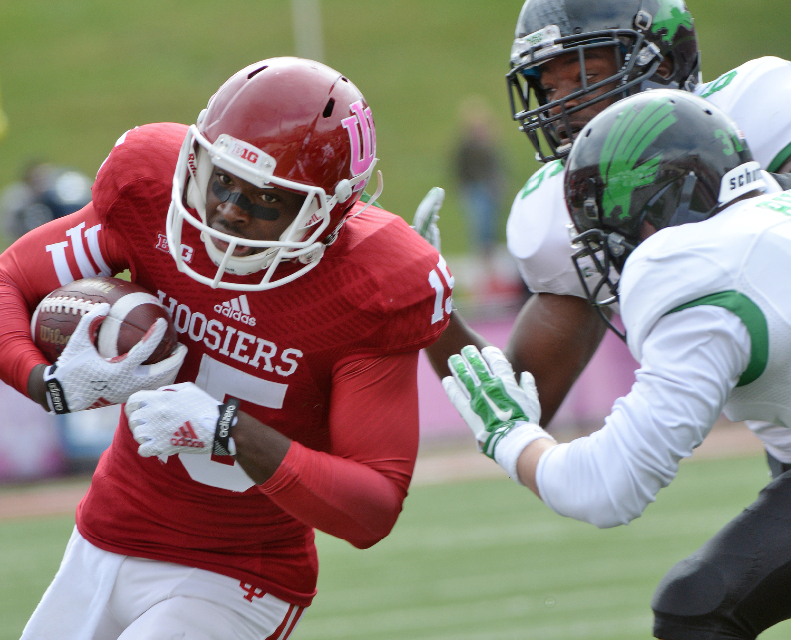 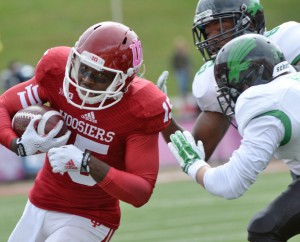 Lots of new and interesting stuff to delve into this week. Let’s go.

WR: (1) Shane Wynn, Nick Stoner and Isaiah Roundtree (J’Shun Harris left with a concussion during the first series and did not return. Roundtree moved up to play with Stoner and Wynn), (2) Damon Graham, Simmie Cobbs and Dominique Booth. Ricky Jones played a few series as well.

LT: (1) Ralston Evans and (2) Peyton Eckert. Eckert only played one non-garbage time series, but as we’ll see, he contributed to Tevin’s big run.

So far this season, IU’s formations haven’t varied much and IU’s personnel groupings (by which I mean the number of RBs, WRs and TEs on the field at a given time) have hardly changed at all.  The personnel group has been 3 wide receivers, 1 RB and 1 TE in all but a few short yardage and goalline situations when IU has added a second tight end.  As to formations, the tight end has generally lined up in one of three locations: outside the tackle in the traditional position, behind the tackle as an H-back or in the slot. The lone running back has either lined up in the pistol behind the QB, slightly behind and offset to one side, or even with the QB to either side. Three wide receivers have generally been arranged two to the field and one to the boundary, and when the tight end splits out, he either made the field side trips or balanced out the formation on the boundary side.

Last Saturday, the Kevins threw in some formation wrinkles. First, we saw more formations with two tight ends on the field at once. The first was your standard 2-TE set: each TE lined up on either end of the line, directly outside the tackle. When IU used this formation, the two remaining wide receivers lined up to the field side  One obvious benefit of that formation is it allows Shane Wynn to play in the slot, where he’s most comfortable.  Sure enough, the first time IU showed this formation, Wynn ran an out from the slot and picked up a first down.

Another two-TE set looked a little odd. One TE was lined up 3 yards behind the tackle in the normal H-Back position. The 2nd TE was lined up 2 yards behind the first TE, 5 yards behind the tackle, roughly even with Sudfeld, but farther away from the quarterback than a running back would normally be in the shotgun.[ref] And the tight end was in a three-point stance, unlike a shotgun running back.[/ref]  The only time they showed this formation, there was no running back in the backfield. Instead, Coleman was originally lined up in the slot and came in motion across the formation.  At the snap, Sudfeld faked the jet sweep to Coleman, looked for a wheel route to one of the tight ends before checking down to Coleman for an 8 yard gain.

The last two-TE set also involved an H-back, but this time, the H-back lined up directly behind the other tight end who was lined up in the traditional position outside of the tackle.  From this formation, IU faked a jet sweep to Wynn to the two-TE side and ran an inside zone to Coleman.[ref] In case you’re wondering, I will take a more in-depth look at the jet/fly sweep, just not this week.[/ref]

The other big formation/personnel grouping change I noticed: Tevin Coleman and D’Angelo Roberts on the field at the same time.  In the second quarter, Coleman started a possession in the slot, with Roberts in the backfield with Sudfeld.  They ran a simple outside zone to Roberts away from Coleman’s side.[ref] I suppose it’s possible Coleman was used in the slot a few times because of the injury to J’Shun Harris, but I doubt it.[/ref]  The next play, Coleman and Roberts flanked Sudfeld in the 2-back shotgun formation.  We saw a little of this last year, usually when Tre Roberson was playing QB:

This time IU ran a simple outside zone with Roberts serving as the lead blocker and the play picked up 8 yards, but was called back for holding.  While the results weren’t great against North Texas, I think we’ll see more of this going forward. If the Kevins want to get their most dangerous offensive weapons on the field at the same time, this is the way to do it.  Even without a quarterback that can run the option, there are countless ways for IU to attack defenses by deploying Roberts and Coleman together.

Last week, much was made of comments by Maryland defenders that they were frustrating the IU offense by calling out their plays before they happened.  K Dub downplayed those comments and rightfully so.  If the offense does it’s job, it doesn’t matter that the defense knows what’s coming.  That being said, an argument can be made that the offensive gameplan against the Terrapins was somewhat vanilla.  In fact, I don’t think IU showed a single new formation, personnel grouping or play against Maryland that I hadn’t seen in the previous 3 games.[ref] I really think the inability of the offensive line to get any push against the Maryland front surprised the coaches a bit, and they were a little slow to react.  And it didn’t help that Sud and the receivers couldn’t get on the same page.[/ref] I’m not sure if it was a response to the Maryland game or not, but in addition to the new formations and personnel grouping discussed above, IU also ran a few plays that broke some tendencies established in the first 4 games.

One of the staples in IU’s running gameplan in the first four games was a variation on the inside zone where the tight end lines up as an H-back behind the tackle to the opposite side of the formation as the running back, who is offset from the QB in the shotgun.  At the snap, the offensive line does a standard inside zone block, while the tight end pulls behind the line to kick out the backside defensive end, setting up a cutback lane for the running back.  Overall, it’s been a successful play for IU, but Maryland stuffed IU on a 4th and 1 on this play, and it sured looked like Maryland’s linebackers were ready for Coleman to cut back and were completely selling out on the run.  Because IU had run the play so much, I was just waiting for the Kevins to break out a play action pass to the tight end from the same look.  On IU’s second drive, they faced a 4th and 1 on UNT’s 13.

The clip starts a little late, but you get the idea from the replay.  Sudfeld faked the inside zone to Coleman, rolled to his right and hit Fuchs, who had lined up as an H-back and pulled behind the formation, just as he would have if he had been kicking out the backside DE. The UNT defensive end reacted to Sudfeld’s rollout and Fuchs was all alone.

Whether you can call it a “tendency” or not is debatable, but IU also changed up the way it ran the outside zone against UNT.  For the most part, IU has run the outside zone with the running back starting to one side of Sudfeld and running in front of Sud to take the handoff.  Again, for the most part, the play has worked well. The downside is that it’s a little slow-developing, and it requires the running back to move laterally for quite a while.

Against UNT on multiple occasions, IU ran the outside zone from the pistol formation, which they had previously used almost exclusively for inside zones and traps.  The advantage of using the pistol is that the running back starts out moving diagonally, instead of laterally, and hits the edge more quickly and with more north/south momentum.  They also changed up the blocking a bit. When IU used a pin-and-pull outside zone earlier this season, just the tight end blocked down while the playside tackle and guard pulled. Against UNT, the tight end AND the tackle blocked down, while the playside guard and the center pulled.  This change worked well a few times, and it worked REALLY well once:

The tight end Fuchs and the playside tackle Peyton Eckert caved in the playside defensive line, while guard Jacob Bailey and center Collin Rahrig pulled and kicked out second level defenders. The block that turned a good run into a big gain was turned in by backside tackle Dimtric Camiel, who showed some incredible quickness for a HUGE man and cleared out a linebacker who otherwise would have been in good position to tackle Tevin.

And geez Tevin, you should probably come back next year. You need to work on your speed in the offseason.

But seriously, Tevin Coleman running outside zones, quick tosses and speed options is what this offense does best. I hope they do a lot of it against the Hawkeyes on Saturday.