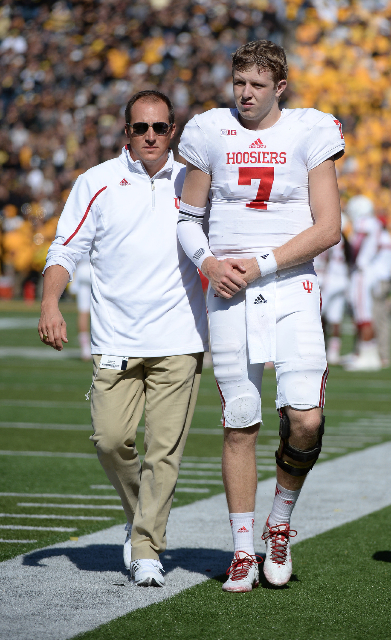 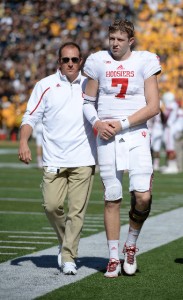 When it comes to the quarterback position, the road from the start of Kevin Wilson’s tenure to the present has had more than its share of bizarre turns, and it’s littered with injuries and transfers.  Today we’ll look examine (1) how IU came to find itself in this mess, (2) what amount of blame – if any – we can place on Kevin Wilson, (3) what we should expect out of the position for the rest of the season and (4) what the QB situation might look like in 2015 and beyond.

When Wilson took over, he had two returning scholarship QBs, Edward Wright-Baker and Dusty Kiel, and one true freshman, Tre Roberson, who decided to stick with his commitment following the coaching change.[ref] Oh by the way, before the season started, Wilson secured the commitment of prized QB recruit Gunner Kiel.[/ref] Halfway through the season, it was evident that neither Wright-Baker nor Dusty Kiel could cut it in Wilson’s system, and with absolutely nothing to lose, Wilson turned the reins over to Roberson.[ref] And Gunner decommited.[/ref] Roberson showed flashes of skill and lots of athleticism in his true freshman season. Things were actually looking promising for the position by the end of the season.

That offseason, predictably, Wright-Baker and Kiel transferred. Wilson brought in Cam Coffman, a JUCO player originally from Missouri with 3 years of eligibility remaining and Nate Sudfeld, a Californian and former Arizona commit who followed former Arizona offensive coordinator Seth Littrell to Bloomington. Going into Wilson’s second season, Roberson was the clear #1, with Coffman and Sudfeld waiting in the wings in case anything happened to Roberson.

Something happened to Roberson. He broke his leg early in a Week 2 blowout win over UMass. Coffman and Sudfeld filled in for the remainder of 2012 and both showed promise.

Besides robbing Roberson of his true sophomore season, his injury also created a serious logjam at the position. If Roberson doesn’t get hurt, by the end of 2012, Wilson would have had a rising junior QB with a year and a half of starting experience[ref] And by that point, Wilson would have had a good idea of whether Roberson was “the guy” or not.[/ref], either a true junior or a redshirt sophomore in Cam Coffman (depending on whether he played in mop-up duty in 2012), and a redshirt freshman in Nate Sudfeld. With two years between Roberson and Sudfeld, Wilson could have allowed Roberson to play out his eligibility without significant risk that Sudfeld would transfer. Assuming Roberson was successful and didn’t sustain a serious injury, Sudfeld would have taken over in 2015 as a redshirt junior.[ref] Coffman may well have transferred in this scenario as well.[/ref]

Sure enough, the first domino fell in December, when Cam Coffman announced that he was transferring in order to find playing time.[ref] He eventually landed at Wyoming.[/ref]  Hard to argue with that decision, as Coffman was pretty clearly the third option, and he only had one year of eligibility (plus a redshirt year, if he wanted to take one).

When the spring game came and went and both Tre and Sudfeld remained on the team, many assumed we were in the clear and we’d have another year of two B1G-caliber starting QBs.  Nope.  In June, it was announced that Tre was transferring, most likely to an FCS school where he could play immediately.[ref] Later, it was announced that Roberson would transfer to Illinois State.  Through 5 games, he’s averaging 238.4 total yards per game with 11 TDs. Sigh.[/ref]  While it’s hard to blame Roberson for wanting to find a school where he could be the unquestioned starter, honestly, the timing of his transfer could hardly have been worse for IU.  If he makes the call in December, there’s at least a chance that Coffman decides to stay in Bloomington as Sudfeld’s backup instead of the third string QB.  Even if both Coffman and Roberson opted to transfer in December, at least Wilson & Co. would have had the opportunity to pursue a Juco, other FBS transfer or possibly another high school recruit in the 2014 class.  As it was, Wilson’s hands were essentially tied.

Heading into the season, then, Sudfeld was the unquestioned starter.  After him, whoa, not much.  True freshman early enrollee Zander Diamont was one possible backup, but he was undersized, weighing in at 175 lbs soaking wet.  Walk-on sophomore Nate Boudreau  was another option, but like all walk-ons, there were questions about his skill-set.  One thing that wasn’t in question: Nate Sudfeld needed to stay healthy.

When the season began, the Kevins threw a curveball: seemingly out of nowhere, true freshman Chris Covington was sent out at QB for the last snap of the Indiana State game.  Covington was a high school quarterback in Chicago, but was recruited as an athlete, with the expectation that he would play defense.  Shortly after the Indiana State game, the story emerged that the coaching staff noticed Covington’s arm at a team picnic and as Wilson put, it Covington “threw too good to be a linebacker.”  Get used to that story because it’s going to get a lot of play for the rest of the season.[ref] I’m already a little sick of it. First of all, the whole “he was switched from linebacker to quarterback” thing sounds strange, but it really isn’t. He was recruited as an athlete and the staff knew he was a successful high school quarterback.  It’s not like the staff had completely ruled out quarterback when they recruited him. And it’s not like he was playing linebacker for years. He was switched to quarterback after a week, maybe two, of fall camp.[/ref]

Then Saturday happened. Sudfeld went down with a shoulder injury. Covington found himself in a ridiculously difficult spot and was largely ineffective.

(2) How much blame can we place on Wilson for the current mess at quarterback?

Again, I hate that we’re here, but I think the question is relevant so let’s get this over with.

The most direct cause of the present predicament was the transfers of Roberson and Coffman.  If we start from the premise that Roberson and Coffman each made rational decisions in trying to find a starting role, then I don’t think you can blame Wilson at all for those decisions.  I guess you could fault him for not being more persuasive, but when you don’t have a starting role to promise, there’s only so much you can say.  To me, the fact that Wilson kept Sudfeld, Roberson and Coffman at IU for the entire 2013 season a was quite an accomplishment.

What about recruiting? Wilson took a QB in the 2011 class (Roberson), two QBs in 2012 (Sudfeld and Coffman), none in 2013 and Diamont, Danny Cameron and Chris Covington in 2014.  The obvious place to second-guess there is the 2013 class.  As you might recall, that was a class with a heavy emphasis on defense.[ref] Remember when the terrible defense was our biggest problem? I miss those days.[/ref]  That being said, Wilson probably could have fit a quarterback into the class, but what type of recruit could he have attracted?  A potential recruit in the summer and fall of 2012 was looking at a team with three quarterbacks that were sophomores or younger.  Not all that enticing.[ref] Quarterback recruiting is somewhat different than other recruiting in this regard. Unless we’re talking about the Alabama’s of the world, it’s hard to convince top or even mid-level quarterback recruits to commit when there isn’t a legitimate chance they will play in their first 2-3 years on campus.[/ref]  Again, Wilson probably could have secured a body at quarterback, but how much would a body have helped the current situation, presumably as a redshirt freshman?  I would argue not significantly.

Honestly, I just don’t see that much that Wilson could have done differently. He’s had a serious run of bad luck, starting with Roberson’s injury against UMass in 2012 and continuing through last Saturday.  Of course, the program he heads has had a run of bad luck dating back to 1967.

(3) What does the rest of the season look like?

Your guess is as good as mine.  Based on Wilson’s comments in yesterday’s press conference and his demonstrated level of comfort with playing 2 QBs, I expect we’ll see some combination of Covington and Diamont.[ref] Barring injuries of course. If one or both goes down, Nate Boudreau could see action.[/ref]  When Covington’s in, expect a steady diet of zone reads, veers and QB lead draws.  As we saw on Saturday, the question will be whether Covington can develop some ability to diagnose coverage and make accurate throws from the pocket.  His arm strength is not in question.[ref] Just ask J’Shun Harris’s shoulder pad. I think Covington broke it on the throw late in the 2nd quarter that caromed to an Iowa linebacker for an INT.[/ref]

If we see Diamont, I think we can expect more out of the passing game.  While Diamont isn’t the runner that Covington is, he’s significantly more mobile than Sudfeld and more developed as a passer than Covington.  Like any freshman, there were some questions about his decision-making during spring practice. There’s also a very real concern about Diamont’s ability to withstand the punishment of B1G football. Seriously, Shilique Calhoun might break him in half on Saturday.

God willing, Sudfeld comes back healthy for his senior year.  Diamont and Covington hopefully improve with some game experience under their belt and another spring of honing their skills.  Class of 2015 recruit Tommy Stevens out of Decatur Central in Indianapolis joins the mix.  He may be more physically prepared to step right in as a freshman than either Diamont and Covington are this season.  Again, hopefully he just gets to redshirt and prepare for a competition with Diamont and Covington in 2016.

All of this is far from ideal.  The absolute best-case scenario for 2014 is one of either Covington or Diamont seizes the opportunity and improbably leads IU to 3 wins in their last 6 games and a bowl appearance.  Stranger things have happened.  Of course, the far more likely scenario is both Covington and Diamont struggle like the true freshmen they are, opposing defenses key on Tevin Coleman and the dynamite IU offense of 2013 is reduced to shell of itself as IU loses 5 or 6 of their remaining games.

Nobody said being an IU Football fan would be easy.