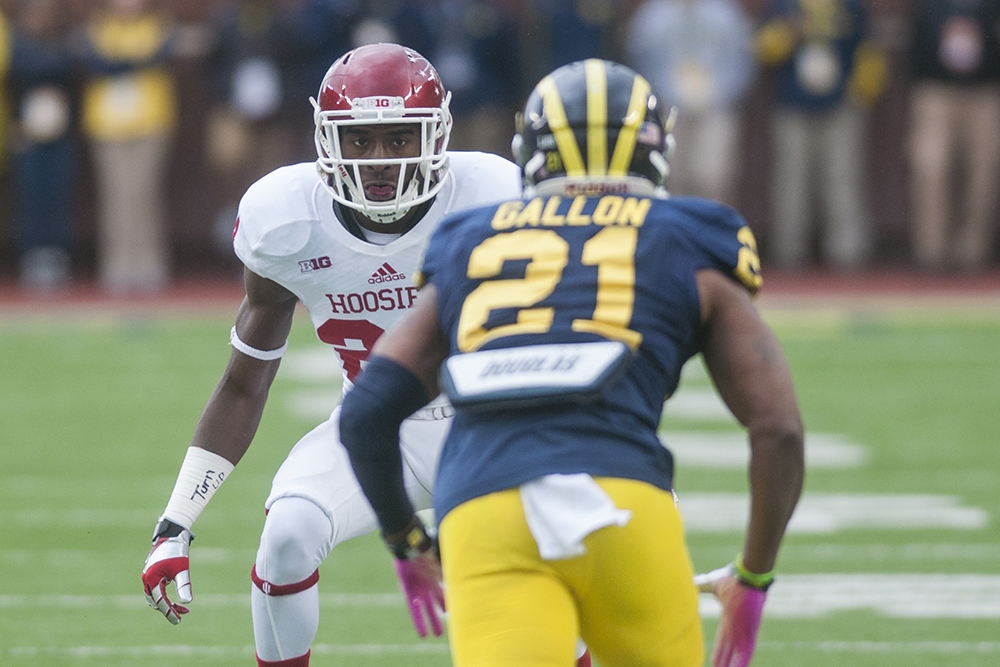 If you remember last year’s IU vs. Michigan game, this week’s White-Guy-On-Hardy Mismatch of The Week should be easy to predict.

As you may recall, Jeremy Gallon abused the IU secondary (mostly Tim Bennett) like no receiver in B1G history has ever abused a secondary, to the tune of 14 catches for 369 yards. 3 – 6 – 9.  Here’s just a little taste, in case you’ve repressed the memories…

Devin Funchess had a nice day too. He had 4 catches for 84 yards. Gallon is gone, but Funchess remains. Last year, Funchess was still a tight end, at least in name. This year, he’s a full-time wide receiver, and he’s averaging just under 6 catches and roughly 75 yards per game. After a 3 TD opener against App St., Funchess has been fairly quiet. He’s gone over 100 yards receiving only once, against Notre Dame. In B1G play, he’s scored only 1 TD and his max yardage total is 71.

So why is he the WGOH Mismatch?

Because there were two components to Michigan’s big day through the air. While one component has changed via Gallon’s graduation, the other component, IU’s secondary, remains largely intact. The starting corners on Saturday, Tim Bennett and Michael Hunter, are the same corners that started last year. Safeties Antonio Allen and Mark Murphy both saw action as well.[ref] With Allen suffering a season-ending knee injury during the game.[/ref] Unfortunately, at least in B1G play, this group hasn’t shown much – if any – improvement against the pass. Two Maryland WRs notched 100-yard days, and Sparty’s Tony Lippett went for 123. Iowa, not known as a great passing team, ripped off an 80-yard TD pass on a busted coverage. On top of it all, IU likes to rotate in the secondary, and the second group is generally comprised of two redshirt freshman (safety Chase Dutra and corner Rashard Fant) and two true freshman (safety Tony Fields and corner Donovan Clark), who are all physically gifted, but prone to the normal freshman mistakes.

I know, I know, Michigan’s offense is worse than last year. Devin Funchess is not the deep threat that Jeremy Gallon was. I get all that. But the disaster that was IU’s pass defense against Michigan in 2013 remains fresh in my mind. While I hope Bennett & Co. prove me wrong, I expect Gardner and Funchess to connect for at least 125 yards and two scores.

By the way, if you’re looking for some other stuff to read going into this game, head over to the incredible mgoblog.com and check out their breakdown of IU’s defense and offense. If you want an in-depth look at Michigan’s offense, check out their Upon Further Review segment from the Michigan State game. I highly recommend pretty much everything on that site.[ref] And sure, they gave PJP a shout this week, which we very much  appreciate.[/ref]