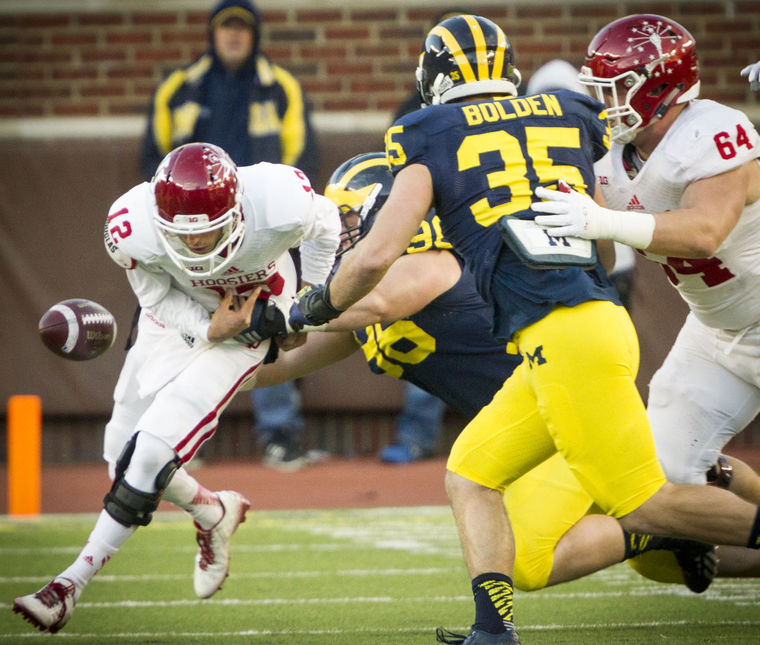 Because nothing will get you jacked up for tomorrow’s game more than looking back at last week’s offensive performance. #ManagingExpectations

QB: (1) Zander Diamont and (2) Nate Boudreau. Boudreau played one series, got sacked and hurt his shoulder. Of course.

RB: (1) Tevin Coleman, (2) D’Angelo Roberts and (3) Devine Redding. Coleman sat for three straight possessions in the 1st and 2nd quarter after he fumbled. K Dub said that’s a rule that’s been in place since Bill Mallory was at IU. I remember him mentioning that rule after the Navy game in 2012 when Coleman, then a freshman, was forced into action in the 4th quarter following a Stephen Houston fumble. But is it really a rule? It sure didn’t seem like a rule after Coleman fumbled earlier this season against Bowling Green and then played in the next series, which happened to be late in the 4th quarter. I’m completely on board with Wilson holding his players accountable when they make mistakes, and if he didn’t like the cavalier way in which Coleman was carrying the ball, by all means pull him.[ref] For the record, this particular fumble, like the one against Bowling Green, seemed pretty flukey and not indicative of a player not taking care of the ball.[/ref] But don’t pretend you’re simply following a hard and fast rule when you clearly make exceptions when you want to. If there was ever a reason to make an exception, it’s the current state of the offense. Roberts is a solid back, but he’s no Coleman. Coleman ripping off a big run is pretty much this offense’s only hope. While taking Coleman out for 3 straight possession didn’t decide the game, it didn’t help.  Moving on…

RT: (1) Ralston Evans and (2) Dimitric Camiel. Camiel took over after Evans was injured in the first half.

The main addition to the IU offense coming out of the bye week was the formation commonly referred to as the wildcat. In case you haven’t watched any football in the past few years, the wildcat simply means that a running back/wide receiver lines up in the shotgun and takes the snap. It’s almost always a run of some kind and there’s frequently a fake or a handoff to a motion man. The blocking is generally the same as any other run out of the shotgun. Really, the wildcat just cuts out the middleman – the quarterback.

Because the blocking is the same and the running back does essentially the same thing once the ball is snapped, the wildcat is relatively easy to install. So it’s certainly possible that the Kevins added this during the bye week, without ever practicing it in spring ball or fall camp. Regardless of when it was installed, it hadn’t been used in a game until last Saturday.

While it is relatively easy to add the wildcat, there are some aspects of the wildcat that require some practice. The running back-turned-quarterback has to work on an entirely different type of ball-handling, primarily faking or handing off to the motion man. The motion man and the wildcat QB have to work on timing as well.  Since the pass is essentially taken out of the equation, effective fakes, which require good timing and ball-handling, are really the only deception the offense has.

First, notice that the motion man, J’Shun Harris, takes an odd angle and actually takes the ball heading away from the line of scrimmage.  With that angle, the play was over as soon as Harris took the ball. On the next play, Roberts keeps it and has nowhere to go.

In total, IU ran 7 plays from the wildcat and gained a total of 16 yards.  Tevin Coleman picked up 17 yards on one carry out of the wildcat so the other 6 plays went for -1 yard. So yeah, it worked about as well as the rest of the offense.

Diamont was 5-8 for 25 yards. He completed two passes to Shane Wynn, two to D’Angelo Roberts and one to Simmie Cobbs. Wait, Diamont only had 8 passes…so we can go through each one again!!

1. Diamont decides not to throw a swing pass to Tevin, scrambles for a bit and throws it away. Not the best start.

2. An out route to Shane Wynn, complete for 9 yards. Closer. Better. Warmer.

3. Diamont rolls out, waits a little too long and throws incomplete to Simmie Cobb on a comeback route along the sideline.

4. On 3rd and 7, Diamont completes a shovel pass (hooray!) to D’Angelo Roberts for no gain (boo).

5. Screen pass to Roberts out of the backfield, complete for 5 yards.

6. 3rd and 5, Diamont throws low to Ricky Jones on a hitch. Incomplete.

8. See #3, but Diamont throws on time and completes an 8-yard comeback to Simmie Cobbs. Easily the best pass of Diamont’s career to date. He threw in rhythm, on time and accurately. More, please.

There were some good throws here. The out to Wynn. The comeback to Cobbs. He scrambled successfully. He didn’t have a ball taken from him by a defensive lineman like big brother taking little brother’s Power Ranger…oh wait, yeah that happened. Baby steps, guys.

One thing missing from the list of throws – (touchdowns, yes, but let’s not get ahead of ourselves) – deep throws. No throw went past the first down sticks, let alone 20 or 30 yards downfield. At some point, Diamont will need to take some shots, just to keep the defense somewhat honest. I think we’ll see some of that this week against Penn State.[ref]At the very least, I’d like to see a 1st down picked up via the forward pass. We haven’t seen that since the Iowa game.[/ref]

Again, let me reiterate that Zander has been placed in a nearly impossible situation. He has talent, and he can absolutely develop into a quality B1G quarterback. But for these next four games, man, what I wouldn’t give to have a healthy Nate Sudfeld. Or Tre Roberson. Or Cam Coffman.