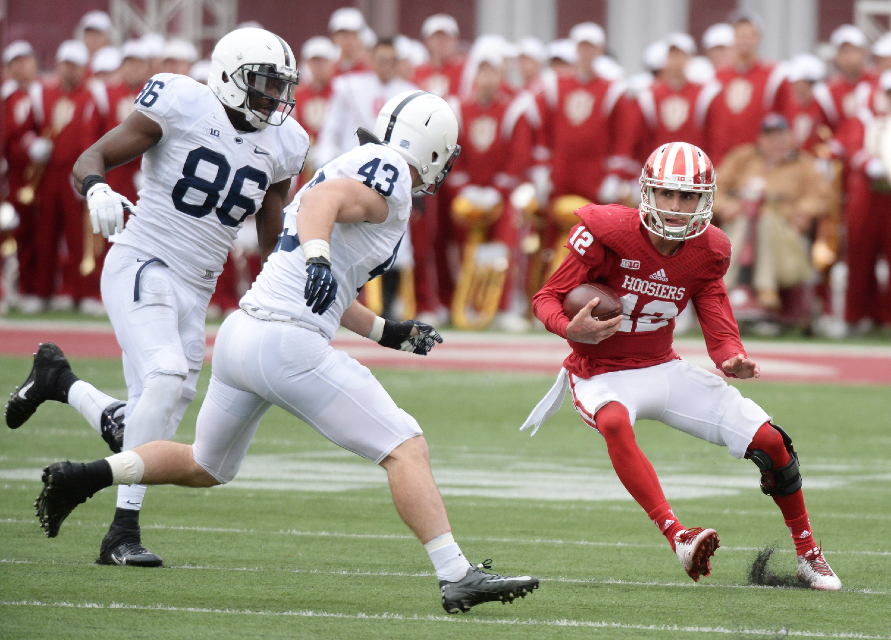 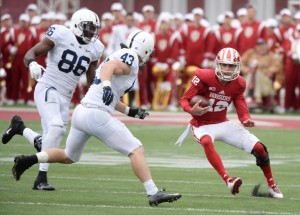 Next week we might have to do “IU defensive points minus IU offensive points”: Over/Under 0.5.  But we’ll worry about that on Thursday.

Things were looking bleak.  The Hoosiers had gone 11 quarters without gaining a first down through the air.  Then it happened!  Early in the 4th quarter, Zander Diamont found Shane Wynn for a 7 yard gain on 3rd and 5.  It would take 4 more drives, but the Hoosiers would pick another first down passing when Dominique Booth caught a Diamont pass in what would be the final positive yardage play for Indiana.

This one was a perfect sweep for our participants.

This was obviously the best performance by Indiana freshman quarterback Zander Diamont.  He finished 13 of 27 for 68 yards and added 58 yards on the ground.  Of these rushes, he gained 50 yards on pass plays in which he escaped pressure and made a play with his legs.  Looking in terms of passing equivalent points, 1.59 EqPts came via these rushes.  On actual passes, he had 2.34 EqPts.  Finally, he lost 0.26 EqPts when he was sacked in the 4th quarter.

Six of you correctly saw the under.

No RB pass trickery.  No Danny Cameron.  Just the Kevins opening up the playbook a little bit and letting Diamont throw it.

Four were not tricked by the threat of RB pass tricks.

Had it not been for a Diamont interception in which Penn State took over at the IU 24, I’m fairly certain that this would have ended in an “under”.  Nevertheless, it was a great performance by the Indiana defense,  While they allowed Penn State to score in 3 quarters, they held the Nittany Lions to just 13 points.

Seven got this correct.  I’m fairly certain if we set the line at 13.5 points allowed, that we would have had none correct.

This just in.  Penn State is bad at protecting Christian Hackenberg.  Maybe Tommy Stevens is banking on a Hackenberg injury next year and early playing time.[ref]That is a story for another day.  Suffice to say, Kevin Wilson must bring in another quarterback for next year.[/ref]  Nevertheless, 5 different Hoosiers recorded a sack (Hardin, Richardson, Hoff, Green, Allen).

Only three understood exactly how bad the Penn State offensive line is.[ref]Because I assume these 3 didn’t pick the over based on the IU pass rush[/ref]

Eric Toth is earning his scholarship this season.  He punted 11 times and averaged nearly 37 yards per punt.  Toth could have had several punts inside the 20, but his first punt went into the end zone for a touchback.  His second punt went for 19 yards.  He dropped his fourth punt to the Penn State 14 where it was fair caught.  Until his next punt inside the 20, he had 4 straight punts from the IU 25, IU 10, IU 15, and IU 9 yard lines.

Exactly half either had the foresight that Toth would drop it inside the 20 at least twice or IU’s offense would drive far enough to allow him to.

Apparently home field advantage doesn’t matter in the Big Ten.  It certainly doesn’t at Indiana.  Anyway, Minnesota was the only home team to hold serve.

Only Alan V. got this one correct.