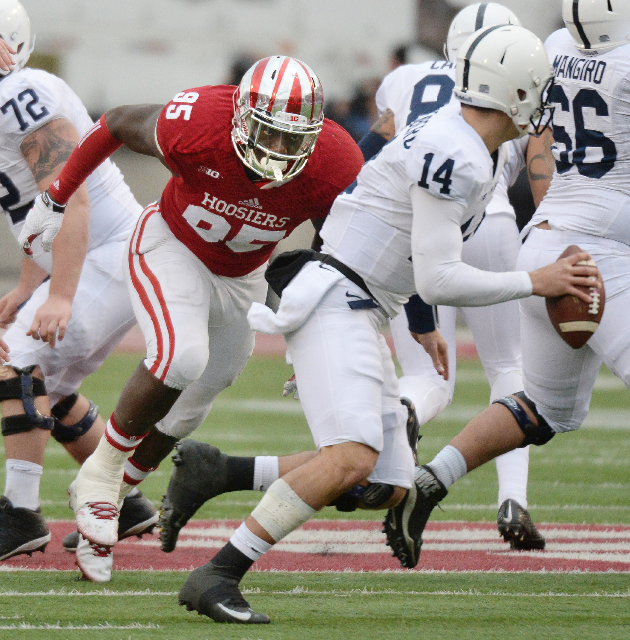 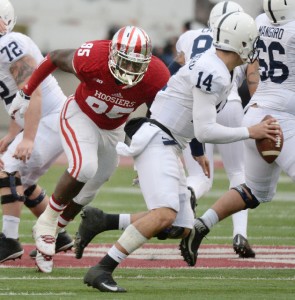 IU’s best defensive performance of the season and maybe the best of the Wilson era. Except for one damn draw play. Let’s take a look.

CB: Tim Bennett, Michael Hunter, Rashard Fant and Donovan Clark. Bennett and Hunter played about 2/3 of the time. Possibly in response to some struggles by Hunter, Clark saw significant time in the 2nd half.

Similar to last week in that Darius Latham manned the nose (instead of Chris Cormier), while Richardson and Mangieri played either end and Tegray Scales and Greg Gooch played the two inside linebacker spots.  However, IU returned to the personnel grouping they’d used earlier this year with Zach Shaw staying on the field as the bandit (instead of Flo Hardin), Bennett moving inside to the nickel corner, and Rashard Fant or Donovan Clark taking Bennett’s spot on the outside. Even though Chase Dutra picked off a pass last week as the 5th defensive back, we didn’t see him in that role at all this week. In total, IU went to this personnel group for 9 plays.

Living in the Nittany Lion Backfield

Let’s get this out of the way right now: yes, I realize Penn State’s offense, and particularly its offensive line, has been a disaster all year. So if you want to take the view that Saturday’s result was more about Penn State’s ineptitude that anything IU did, I get it and I certainly can’t say for a fact that you’re wrong.  What I can say is that bad offenses have often times seen dramatic one week improvement when they run into (or more accurately, through) the IU defense. Take Michigan, for example. They were terrible all season leading up to last week, then they drop 34 on IU, moving up and down the field with relative ease. This week, they returned to ineptitude, putting up only 10 points against Northwestern.

In those clips, what you won’t see is a single play where IU had to bring 6 rushers in order to get pressure. Twice, 4 rushers did the trick. Three other times, 5 were used. On one of those, Antonio Allen wasn’t actually a blitzer, but he ended up getting the sack after Hackenberg was flushed from the pocket and Allen ran up from his short zone.[ref] As noted by Chuck Long on the BTN broadcast, Hackenberg’s failure to throw the ball away there was puzzling.[/ref]

That being said, IU was pretty damn aggressive. By my count, IU brought at least one extra rusher (i.e. more than 4) 20 times on Saturday (15 5-man pressures and 5 6-man blitzes).[ref] IU only rushed 3 twice.[/ref] A corner (either Tim Bennett or Donovan Clark) blitzed 4 times. The boundary safety (Murphy or Dutra) blitzed 5 times.

IU consistently forced Penn State into passing downs by controlling the run game. Penn State’s two running backs, Bill Belton and Akeel Lynch, combined for 199 yards, which is a massive amount by 2014 Penn State standards. When you cut out Belton’s 92-yard TD run and Lynch’s 20-yard run in the 2nd quarter, however, the pair only put up 87 yards on their other 27 carries (roughly 3.2 yards per carry). While IU frequently used Antonio Allen as an 8th man in the box, most of the heavy lifting (and hitting) was done by the defensive line and linebackers. Bobby Richardson, Zach Shaw, Darius Latham and T.J. Simmons were particularly impressive.  While IU is still not a great run-stopping team – and one game certainly doesn’t make them even an average pass rushing team – their ability to impose their will on a struggling offense was extremely encouraging.

A Defensive Touchdown! (and another interception!)

On one of those blitzes I mentioned, this happened:

In case you haven’t heard, Mark Murphy is a smart guy. Smart enough to know that Penn State throws wide receiver screens like they are going out of style. They threw something like 17 of them against Ohio State a few weeks back. Great call by Knorr to bring the safety/SLB blitz from the field on a 1st down when Penn State particularly likes the WR screen, and then, incredible recognition and instincts by Murphy to cut off his blitz, get in the passing lane, tip the pass to himself and take it to the house.

And it was awesome. As IU fans, I think we forget just how exciting defensive touchdowns are.  I got a little excited on the Twitters:

But yeah, IU has had a couple defensive scores in non-conference games in the past few years, including a Murphy interception return for a TD against North Texas in 2011[ref] And a safety in B1G play, last year against Penn State.[/ref], but they hadn’t recorded a defensive TD in a B1G game since Tracy Porter returned a fumble for a TD in the 2nd half of a blowout loss at Michigan State in 2007.

As incredible as Murphy’s play was, he had the second-best catch by an IU defender on the day:

Just a crazy good catch by a true freshman linebacker, and in a huge spot, setting IU up at midfield with 5 minutes to go.[ref] The fact that the offense did absolutely nothing with that field position doesn’t diminish Gooch’s play.[/ref] Between Gooch and Scales, IU has found some linebackers that can play in space.

That One Big Play…

We have to talk about the lone offensive touchdown. While we were all still basking in the glory of the Murphy TD, Penn State called a draw on 1st and 10 inside their own 10. Watching the play live, when Belton broke through the line, I kept waiting for a safety to show up and tackle him. No such luck. As Belton raced for the end zone, I thought to myself, “we must have blitzed away from the draw.” Then I saw the replay. Take a look:

You’ll notice that there’s no blitz. So what the hell happened? Like any big running play, there’s plenty of blame to go around here. To start with, Ralph Green let himself get pushed too far to the outside, presumably because he though Hackenberg was dropping back to pass. That left a gaping hole between Green and Rayner at nose tackle. As a consequence, T.J. Simmons had to push out wider, creating a cutback lane for Belton between Simmons and Rayner. You might expect the backside LB to close that gap, but Tegray Scales couldn’t get off a block. Flo Hardin couldn’t reach the play from the outside because he reacted to the bubble screen action by Penn State’s wide receivers.

Then there’s the safeties. Watch the play again and keep your eyes on Antonio Allen (#40). He aggressively attacks the hole between Rayner and defensive end Shawn Heffern…but Belton wasn’t going to that hole.  You hate to blame a guy for being aggressive, but in this case, Allen took himself right out of the play. What about the other safety? Good question. I had to watch this Penn State replay to determine that Dutra was in for Murphy at boundary safety[ref] You can just see Dutra flash across the screen, way behind Belton, at the 3:12 mark.[/ref] because Dutra doesn’t even show up in the BTN live shot of the play. I assume that Dutra reacted to the bubble screen action as well. I think it’s fair to say he bit a little too hard.

I should also note that while Penn State wasn’t exactly a well-oiled offensive machine on Saturday, this was a smart call given the situation and Belton and Co. executed it superbly. Unfortunately for IU, that was about all the offense the Nittany Lions would need.