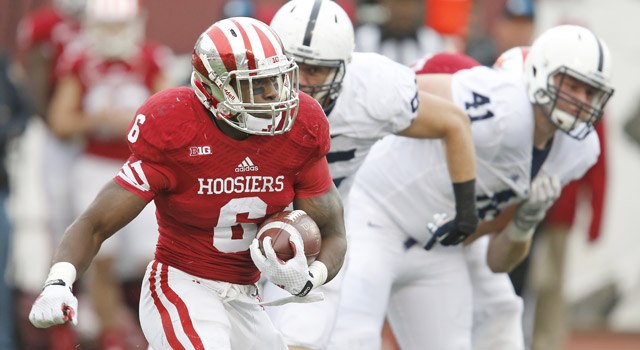 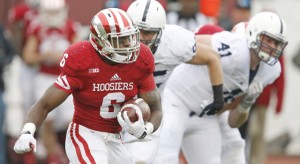 Some of you are playing to win still.  Some are just playing for pride.  We don’t want the Hoosiers to give up and we certainly don’t want you to give up on your over/under picks.  As always, post your picks in the comments, tweet them to @puntjohnpunt or email them to puntjohnpunt@gmail.com.

Background:Rutgers is allowing explosive drives[ref]Defined as the percentage of each opponent offense’s drives that average at least 10 yards per play[/ref] on 21.4% of their drives.  Tevin Coleman is 7th in the NCAA in yards per rush at 7.53.  Tevin had rushes of 10 and 17 against Penn State on 20 total carries.  Against Michigan, Coleman had 4 rushes of 10 or more, although on 27 carries.

Background: Diamont had 9 such plays against Michigan.  Last week, the Kevins let him pass more against Penn State and he had 19 such plays, 10 on the ground and 9 in the air.  That was against a pretty good defense.  Rutgers isn’t as good as Penn State.  However, if Tevin gets things going on the ground, does that limit Diamont’s chances?

Background: Total passing yards, rushing yards, and receiving yards by IU freshman.  You can assume that Diamont will take all the snaps at QB.  He’ll add some on the ground as well.  Devine Redding might get a carry, but I wouldn’t hold your breath.  Receiving-wise, Dominque Booth, Simmie Cobbs, J-Shun Harris, and Jordan Fuchs are the likely candidates.  Last week the IU freshmen had 68 yards passing, 56 yards rushing, and 64 yards receiving.  We’ll see if they can beat that mark this week.

Background:  Rutgers comes into this game ranking 96th in the NCAA in 3rd down conversions at 36.4%.   Indiana’s defense counters at 36.0% ranking 36th in the NCAA.[ref]I was somewhat surprised to see Indiana rank so high in this metric, but allowing just 4 of 17 against Penn State helps as does 2 for 14 against Indiana State.[/ref]

Also, this statistic is as reflective of what a defense is doing on 1st and 2nd down than what they are doing on 3rd down.  Allowing the offense to gain on 1st and 2nd puts them in a manageable 3rd and short.  Putting the offense in 3rd and long situations greatly increases the odds that you’ll make the stop on 3rd.  Penn State’s average 3rd down distance was 7.8.  Hence the low conversion rate.

5. Rutgers plays of 0 or negative yards in non-garbage time – Over/Under 17.5

Background: Last week Indiana forced Penn State into no gains or losses on 33 of 66 plays.  Against Michigan, in non-garbage time, the number was 15 out of 48.  Say what you want about the Indiana defense, but they’ve been decent at getting into the backfield.  The Hoosiers rank 47th in the NCAA in tackles for loss this season at 6.4 per game.

Background: With Wisconsin facing off against Nebraska, 2 of the top RBs in the league will be facing off.  Gordon leads the NCAA in rushing at 166.8 yards per game.  Abdullah is 6th at 138.9 yards per game although against Purdue he left the game injured with only 1 yard.  Nebraska is 19th in the NCAA allowing only 124 yards per game on the ground.  Wisconsin is 5th at 94 yards per game. Both star RBs have talent, but they also have their work cut out for them going against a top defense.  As we saw with Tevin last week, it is not always easy.