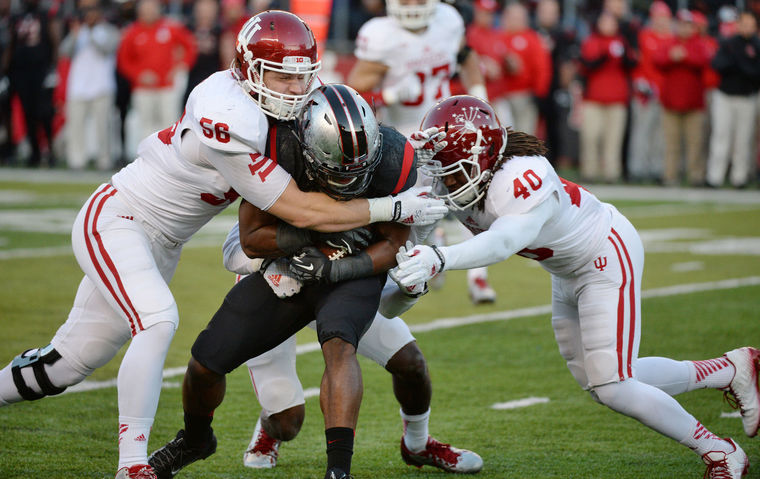 One good half. One bad. One play that the Hoosiers just couldn’t stop.

Boundary ILB (“WLB” in the depth chart): (1) David Cooper and (2) Tegray Scales. Scales’ base personnel playing time was scaled back a bit this week.[ref] See what I did there?[/ref] Cooper saw roughly 2/3 of the snaps.

Field safety: (1) Mark Murphy and (2) Chase Dutra. The split was roughly 60/40, but Dutra played more in the second half, possibly because Murphy seemed to forget how to tackle there for a bit.

Twice in the 1st quarter, IU showed a new passing downs wrinkle: only 2 down lineman (Richardson and Mangieri), a bandit (Shaw), two ILBs (Gooch and Scales), an extra safety who lined up with the linebackers (Dutra), Tim Bennett in the slot, Fant and Hunter at the corners and Allen and Murphy as safeties. This was the first time IU has played only 2 DL and as many as 6 DBs.

On a 3rd and 7 on Rutgers second possession, IU used this personnel. At the snap, IU brought 7 (both DL, both LB, the bandit, Dutra and Bennett) on the blitz, another first for the season. Behind the blitz, IU played man on the three receivers and the tight end. Nova felt pressure almost immediately and had to throw before his receiver was out of his break. Incomplete, punt forced, success.

IU used this personnel again on a 3rd and 9 on Rutger’s next possession. This time, IU only brought 4 (both DL, Gooch and Dutra) and the 7 non-blitzers played Cover 3 zone. Nova had more time and completed a 15-yard pass for a 1st down.

IU went to its passing personnel 8 more times, but it was the usual 3 DL, 3 LB, 5 DB variety, and they didn’t bring another 7-man pressure.

Failing to Defend The Power O

The Scarlet Knights’ offense struggled early. They failed to score on five of their first six possessions, and the only points they scored were a field goal after they started a drive on IU’s 46.  Then, midway through the 2nd quarter, they took over at the IU 44 when they recovered a punt that caromed off Andre Booker. At that point, they found something that worked. What they found is one of the oldest and most successful running plays in football history: the Power O.

We’ve discussed the Power O before because the IU offense runs it at least a few times per game. There are many different variations, but the gist is this: the playside linemen block down (push defensive lineman away from the direction of the play), a backside lineman (a guard or tackled) pulls to the playside and leads the running back through the hole. Many times a fullback or H-back kicks out an unblocked defender, usually a DE or OLB, on the playside.

If you want a great primer on how a pretty damn successful 3-4 defense defends the Power O, check out this post from the incredible fishduck.com. The Power O – and any other running play that involves pulling linemen – creates additional gaps on the playside that have to be controlled by the defense. As explained well in another fishduck post, successful run defense against any offensive scheme involves defenders completing one of three respective roles: spill, force or alley. Against the Power O, it’s not enough for the the force player to simply turn the play inside because, in general, the Power O play is not trying to get outside. The fullback or H-back is trying to kick him out and the play is designed to cut inside. To stop the Power O, the force player needs to aggressively attack the kickout block, meet it at or behind the line of scrimmage and push the block back towards the spill defenders, thus limiting the hole that the pulling lineman can lead through. The spill players need to attack the inside half of their respective gaps, forcing the back to move laterally, where he’ll eventually run into the force player. Because the Power O is designed to create a seam between the force and the spill players, the “alley” defender, frequently a safety, is critical. Ideally, the alley player will read the Power O quickly and attack the line of scrimmage and get to the back before he can get into space.

As the following examples show, IU didn’t fill any of these roles particularly well against Rutgers, and consequently, the Scarlet Knights just killed the Hoosiers with the Power O.

This is not your standard Power O, in that the play ends up outside, and it’s unclear to me if it was designed that way by Rutgers or if it just ended up that way because of the way IU defended it. First, assuming Flo Hardin is the force player here[ref]Determining who is playing what role can be tricky, but alignment generally provides a good idea, and movement after the snap provides more information. Even then, sometimes we have to guess. Here, I’m guessing that Hardin’s the force because he’s lined up outside of the tackle and there’s no tight end to his side. Unfortunately, his movement after the snap doesn’t provide much information.[/ref], he seems to hesitate here and rather than setting the edge, he’s turned inside by the fullback. The fullback would normally kick out, but he may have adjusted on the fly to Hardin. TJ Simmons, the playside ILB, moved down the line and had to stay inside to take away the normal route of a Power O.  The running back continued to move laterally, which is generally a good thing for the defense. Mark Murphy, presumably the alley player, should have seen Hardin get turned inside, which would normally trigger a switch for Murphy to the force player, except that here, the wide receiver to the playside cracks back on the safety. When that happens, the corner responsible for the wide receiver (or the zone to that receiver’s side), Tim Bennett here, exchanges roles with the safety and he now becomes the force. Here, Murphy actually gets around the crack-back block without a problem, but for some reason, he hesitates rather than pushing forward to force the cutback. Likewise, Tim Bennett is slow to read the crack-back and push forward. As a result, the back moves laterally, but never runs into a force and gets to the edge, picking up 15.

Here’s your more traditional Power O. This time, Hardin is head-up over a tight end that is slightly angled inwards (probably to make the down-block easier). Hardin’s initial move at the snap suggests that he was blitzing, which means when the play was a run, he becomes a spill player responsible for the gap between the tight end and the tackle. Given the tight alignment of the wide receiver, corner Michael Hunter is likely the force player, with Murphy as the alley. Simmons takes on the block of the fullback, fulfilling his spill role. The best bet for shutting this run down was for Hunter to slip underneath the pulling guard (who turned his attention to Hunter fairly late) and tackle or at least slow down the back. While Hunter succeeds in turning the run inside, he doesn’t attack the run aggressively enough and an alley was created. Backside ILB David Cooper was the next-best hope, but he was slow to recognize the pulling guard (his key to get moving to the playside) and he was picked off by the playside guard. Murphy couldn’t get off the block of the playside receiver. The back made it to the second level, where backside safety Antonio Allen managed to bring him down.

Hardin is clearly the force player here. He had the right idea, as he attacked at the snap and tried to set the edge, but he allowed himself to be turned and pushed out by the fullback. Playside LB TJ Simmons fails to attack the line of scrimmage at the snap, but to his credit, he realizes the gap left by Hardin and he takes on the pulling guard with his inside shoulder (keeping his outside shoulder free), forcing the play back inside. He had to become a second force player, but because he hesitated, he took on the block two yards farther downfield than he should have. Darius Latham, the playside DE was double-teamed at the snap by the tackle and guard, and was fairly easily driven out of the play. Because Latham, at least momentarily, required a double-team, backside LB David Cooper should have had a free run to the hole between Latham and playside LB TJ Simmons. For whatever reason, Cooper again reacted slowly and instead of moving laterally to mirror the pulling guard, he moved a little forward, turning himself into an easy target for the playside guard coming off the Latham double-team. There’s no alley player to be found here, at least until the back picked up a 1st down, presumably because Mark Murphy moved to the middle of the field at the snap to compensate for backside safety Antonio Allen, who moved into the box before the snap (unfortunately on the side away from the play). Another 15 yards, too easy.

It wasn’t all bad. IU managed to stuff a Power O on a key 4th and 1 in the 2nd quarter:

Mangieri plays the force role perfectly, T.J. Simmons beats the pulling guard to the hole and the running back, seeing that trouble, tried to cut the run back, only to run smack into backside LB David Cooper. While it’s a little easier to defend when you know a power run of some kind is coming, this was still a stellar example of run defense. Also, note that IU was in its double-bandit personnel group here, where Zach Shaw takes Flo Hardin’s spot.

To me, that double-bandit alignment would have been the best response to Power O onslaught. Flo Hardin has had a solid senior season, and he’s valuable as a player that has the quickness and speed to play in space, with the size to assist in run support and pass rush. That being said, rush defense is not his strength. He can fight off the blocks of receivers, but he’s a little undersized when faced with tight ends and fullbacks. Rutgers repeatedly attacked him with bigger blockers. Replacing him with a larger player, like Shaw or Mangieri, on any likely running down likely would have improved IU’s ability to squeeze the Power O.[ref] I’d also like a backside LB with the size to get off a block and the speed to shut down the cutback, but I simply don’t think IU has that at the moment. Cooper is consistently a step slow and Tegray Scales, despite his quickness, is just a little too easy to block right now.[/ref] While you’d sacrifice a little coverage in the flat by taking this tact, that wasn’t where Rutgers was attacking.

While the Power O certainly wasn’t the only aspect of Rutgers’ gameplan that caused the Hoosiers problems[ref]Simple stretch outside zone and FB lead/iso’s also worked well.[/ref], it was the play that IU most consistently failed to stop. IU has made major strides with its run defense this season. Rutgers revealed that there’s more work to be done.