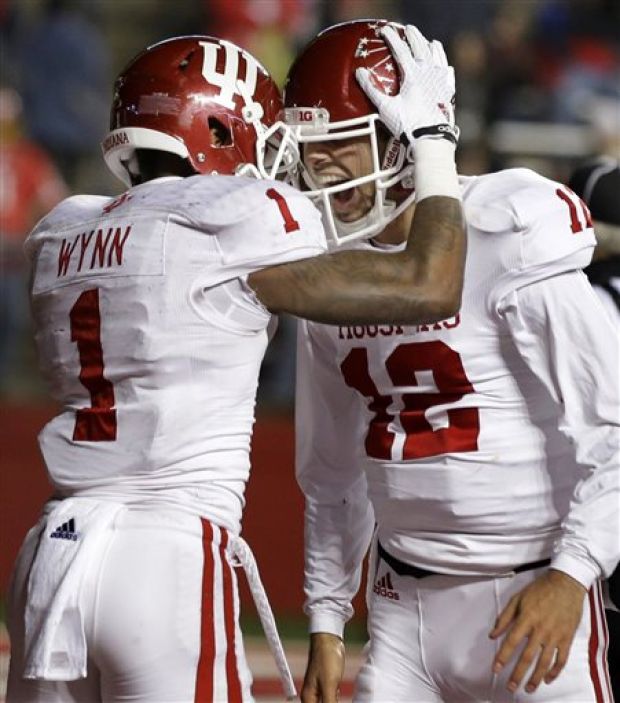 THE OFFENSE RETURNED. Sort of. For the first time in more than a month, this feature wasn’t massively depressing to write.

TE: (1) Anthony Corsaro, (2) Michael Cooper and (3) Jordan Fuchs. Corsaro and Cooper got the majority of the playing time.

RT: (1) Ralston Evans and (2) Dimitric Camiel. Evans also got banged up during the game.

WE HAVE GOOD THINGS TO REVIEW. HOORAY.

I know the offensive line committed penalties like it was their job, and the receivers dropped six more passes, but we talked about those things last week. And it wasn’t enjoyable for anyone. This week, explosive plays finally returned to the IU offense. Let’s celebrate them.

Here’s Tevin’s long TD run at the end of the 1st half:

As I’m sure you recognize by now, that’s a pin-and-pull outside zone. Tight end Michael Cooper turned the defensive end, guards Feeney and Rahrig pulled around. Feeney made a great kick out block. Rahrig ensured the edge is set and then got a nice little sprint workout.  Coleman turned it on. TD. The Rutgers’ defense was plainly not expecting the run. From the end zone view, you can see they only had 5 players in the box, which cuts down on backside pursuit.  As the play develops, you also can’t help but notice some turrible[ref]

[/ref] angles by the Rutgers’ secondary.

FILL IT UP AGAIN

We talked earlier this week about Rutgers’ Power O success on Saturday. Here IU runs its own Power O. Michael Cooper and the rest of the right side of the line blocked down. Rahrig pulled from the left guard spot and kicked out a linebacker. When a blitzing corner couldn’t bring Tevin down in the backfield, he was off to the races.[ref] Yes, there were more bad angles.[/ref] Shockingly, Tevin lost the race, in what became a 4-point tackle by Rutgers DB Delon Stephenson.

How about a passing highlight?!

The play starts with a play-action fake to Coleman. IU keeps one tight end in to block, with three receivers in the route, plus Coleman in the flat. Wynn runs a post from the slot and comes wide open behind a safety. Diamont has all sorts of time and throws on time and on target. AND WYNN CAUGHT IT. It seems so easy…

Congrats to the Zand Man for first career touchdown pass.

Zands of (No) Time[ref] I wasn’t even going to cover all the sacks that happened this week, but doing so gave me a reason to use another Zand/sand play on words.[/ref]

Rutgers racked up 5 sacks on the Hoosier offensive line and Zander in this one. To the clips:

IU kept 7 in to block on this play and Rutgers only brought 5 (the 5th being a safety coming up late). Diamont had just under 3 full seconds before the pocket broke down. While that should be plenty of time for Diamont to find an open man, I’m sure the Kevins would prefer a little more time for Diamont when they have a 7 to 5 blockers to rushers advantage.

One other note on this one: Diamont seems to have a bad habit of circling backwards when he senses pressure. That may get him out of trouble every now and then, but more often than not, it just causes a larger loss of yardage on the sack.

Wait for the replay on this next clip:

Rutgers only rushes 4 and IU has 6 blockers, which should mean plenty of time for Diamont.  Rutgers runs a stunt, bringing a defensive end around to the middle and Dan Feeney fails to come off of his double team on a defensive tackle in time to pick up him. Rutgers DE David Milewski has a free run at Zander, and he doesn’t miss.

This next sack wins the “tactically inexplicable” award. As you will see, Rutgers only rushes 3. One of those 3 is Kemoko Turay, a redshirt freshman and maybe the best pure pass rusher in the B1G not named Joey Bosa. Seems like an obvious double-team scenario, right? Well, if not a double-team, at least block him with a tackle? Ok, ok, maybe a tackle is needed inside for some reason, at least block him with a veteran tight end whose had some time in the weight room? NONE TO ALL. For whatever reason, IU chose to block Turay with only true freshman tight end Jordan Fuchs.

Nope, didn’t pay off. I have no idea what Ralston Evans is doing here. I’m guessing it wasn’t actually Evans’ fault, as it sure seems like the protection call (probably from the sideline and not by Diamont) shifted the entire line away from Fuchs and Turay.

One last thing about that play: are we sure Turay didn’t grab some facemask there?

How about some more Diamont-running-for-his-life?

IU again keeps 7 in to protect Zander. Rutgers blitzes 6 (and a 7th comes after he realizes Coleman is pass protecting) so IU should have been able to account for it. Once again, an outside-to-in stunt is mishandled by the interior of IU’s line, with center Wes Rogers and guard Colin Rahrig both blocking a defensive tackle, while a linebacker comes free up the gut. Zander has virtually no shot, and he actually does a decent job making 2 guys miss. He gave ground again, but he had to make a play there so it’s excusable.

Zander also made one really, really bad throw late in the 3rd quarter:

They were trying to run the fake bubble screen that has worked so well in the Wilson era, but the Rutgers safety doesn’t jump it. Even so, Zander may have been alright if he had led Simmie Cobbs up the field instead of across and had thrown the ball a little more on a line. As it was, the ball floated to the middle of the field for an easy pick. What looked like a promising IU drive with a chance to tie the game ended.

Because I hate to end on low note, enjoy this incredible highlight package, featuring the incomparable Don Fischer’s radio call, from the Hoosiers’ 1987 win over Ohio State: