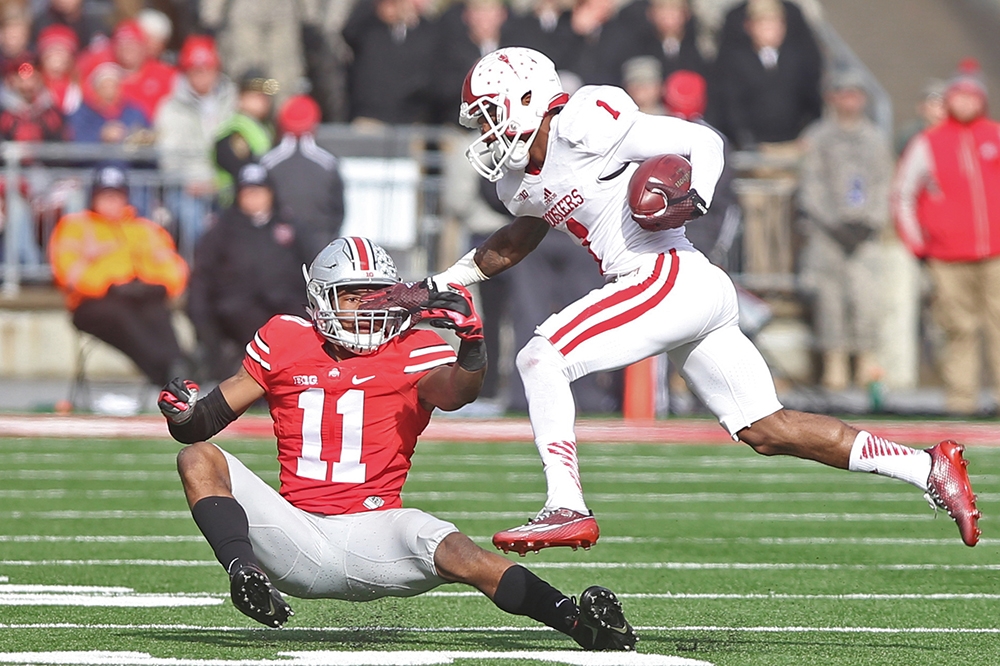 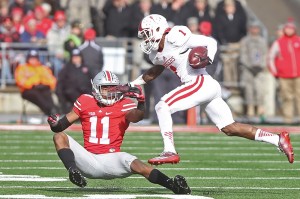 I’m also thankful for the exceptional careers of Shane Wynn and Tevin Coleman. All-time Hoosier greats, both of them.

RB: (1) Tevin Coleman, (2) Devine Redding and (3) D’Angelo Roberts. For the first time this year, Redding was the first back off the bench. Roberts only appeared for one series, as the coaches eased him back from last week’s concussion.

TE: (1) Anthony Corsaro, (2) Michael Cooper and (3) Jordan Fuchs. Corsaro and Cooper got the majority of the playing time.

C: Wes Rogers. Jake Reed was apparently out with an injury.

IU’s offense was a little bit feast-or-famine on Saturday.  Three big plays constituted most of the offensive production in non-garbage time. The first came after IU had gone 3-and-out on their first drive and faced a 3rd and 12 on their second. At this point, there was a real chance that IU would get blown out of the building if they failed to move the ball. Ohio State smelled blood and sent 6 on the blitz. It didn’t work.

Diamont felt the pressure and broke to the outside. Ohio State lost contain, and there was nobody home to stop the Zand Man. The rest was good speed and vision by Zander and some good downfield blocking by IU’s receivers. Diamont was eventually tackled at the 2. Coleman finished the job on the next play, and IU was back in the game.

Later in the 2nd quarter, IU faced a 3rd and 8 and risked squandering the momentum gained by Allen’s second interception. Wynn was lined up in the slot to Diamont’s right. At the snap, Wynn ran a post and found a gap behind the linebacker and in front of the safety. Diamont was well protected and delivered a beautiful ball that hit Wynn in stride. Then Wynn showed his incredible skills after the catch. It’s crazy how difficult it is for defenders to bring down such a little guy.  Watch and enjoy:

That drive led to an IU field goal that cut the Ohio State lead to 1.

IU kept hanging around, and with 7:30 left in the 3rd quarter, the offense took the field at their own 10. The Kevins went with what has probably been their most successful play this season: the pin-and-pull outside zone, with guards Colin Rahrig and Dan Feeney as the pulling linemen. Once again, the play worked:

Jordan Fuchs turned the defensive end, Rahrig kicked out the corner, Feeney blocked the outside linebacker AND the middle linebacker (the middle linebacker taking a terrible angle helped) and a crease was created. As he does so well, Tevin planted a foot and exploded through the crease. One Buckeye defensive back had a chance to save the TD and Tevin froze him with a slight cutback fake. 90-yard touchdown. IU had the lead in the 4th quarter.

It didn’t last. IU’s offense did virtually nothing the rest of the game.  Still, moments matter to Indiana fans. Tevin Coleman taking it 90 yards to the house to give IU the lead against Ohio State was undeniably a moment.