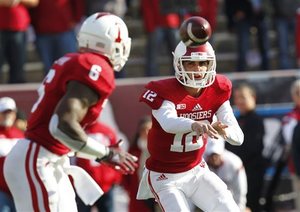 The Hoosiers topped Purdue to head into the offseason with at least a little momentum.

How did the Hoosiers win?

For one thing, Zander Diamont outplayed Purdue QB Austin Appleby.  Neither player was dominant, but Diamont made fewer mistakes and led Indiana to a game-winning drive.  It’s been a while since Indiana had the advantage at QB.

Let’s look into some advanced statistics.

Indiana finished drives “less badly” than Purdue.  Or maybe we can call this defensive improvement.

This was an offensively challenged game at times.  The Hoosiers had drives inside the Purdue 40 yard line on 6 occasions.  After a 1st quarter missed field goal, the Hoosiers would score 3 field goals and 2 touchdowns on their other 5 occasions.  The 3.8 points per trip is merely average.

Fortunately, Purdue was worse.  The Boilers had 1 less trip inside the 40.[ref]I didn’t count their final drive whose final play was a 1st and 10 at the IU 38.[/ref]  Purdue’s drives looked like this: missed field goal, punt, field goal, field goal, and field goal.  In a prototypical bend-but-don’t-break defense, the Hoosiers didn’t allow a touchdown once Purdue reached the 40.

No possession illustrated this more than when Purdue took over at the IU 47 following a long punt return.  The Boilers quickly had a first down at the IU 35.  Then the Hoosiers stiffened, allowing just 1 yard, and forcing a punt.  However, a Shane Wynn fumble on the punt return gave the Boilers the ball at the IU 20.  Indiana would allow another quick first down, but then came together to force a field goal.  Essentially Purdue had 2 chances inside the 40 and only came away with 3 points.

It’s also worth noting that following the other IU turnover, a fumble by Tevin Coleman, Purdue took over at the IU 24.  Like the previous example, IU allowed 1 first down.  Purdue kept moving forward and reached 3rd and goal at the IU 2.  Indiana held and the Boilers had to settle for a field goal.

If these examples aren’t evidence of defensive progress, I don’t know what is.

Indiana won the turnover battle – but not by a ton

Indiana finished with just 2 turnovers compared to 4 for Purdue.  But the Indiana turnovers were almost as costly.  Consider, that 2 of Purdue’s turnovers, the interceptions by Chase Dutra and Michael Hunter, served essentially like punts.  This was especially true of the Dutra interception.  Purdue had the ball at their own 32 and Dutra’s interception was at the IU 22.  This 56 yard difference was more than the Boilers would gain with a punt.

The Hunter interception started at the IU 44 and gave IU the ball at the Indiana 3.  However, it did prevent a long Purdue field goal attempt at the end of the 1st half.

While very few turnovers are good turnovers, these 2 were not particularly costly to Purdue.

Indiana stayed on track to win the game

On the final drive, Indiana ran all 8 plays from standard downs.

Indiana has struggled, particularly with Diamont, once reaching passing downs.[ref]Second-and-8 or more, third-and-5 or more, or fourth-and-5 or more.[/ref]  The Hoosiers gaining yards on all 8 plays was imperative to the success of the drive.  Even the drive prior, which ended in a field goal, had 10 of 13 plays in standard downs.