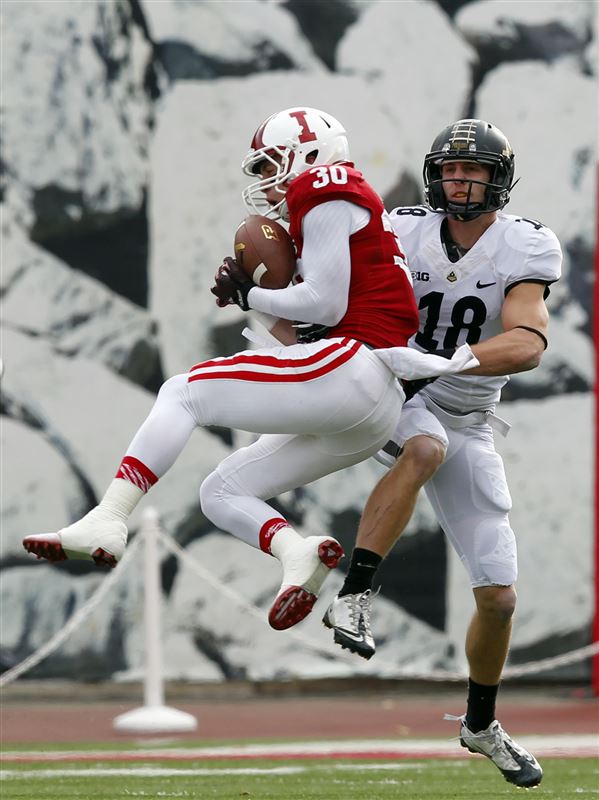 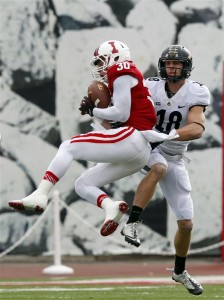 The young and improving IU defense closed the 2014 season on a high note, forcing turnovers, generating pressure and limiting damage in the red zone.

If they hadn’t allowed a long touchdown run out of nowhere, I wouldn’t have even recognized this group.

LDE (“DT” in the depth chart”): (1) Darius Latham and (2) Jordan Heiderman.  Once again, Ralph Green missed this game. It sounds like he actually is injured.

The three starting defensive lineman, Latham, Hoff and Richardson, played the entire second half. That’s by far the longest streak without subbing this season for the defensive line.

Let’s Get The Bad One Out of the Way

Purdue’s lone touchdown on the day was a long run by Akeem Hunt. The video is below if you’d like to see this #DQFanFavorite again:

The play was essentially a lead draw, with an H-back leading Hunt through a hole between the left guard and the center. At the snap, the uncovered left guard sells the pass fake by staying in place, rather than moving out to the linebacker. After the momentary delay, he fired out to TJ Simmons, the playside ILB, while the H-back followed after him to pick off David Cooper, the backside ILB.  Purdue did a good job selling the pass fake (Appleby’s “pass fake” was only the slightest of fakes, but it, along with the offensive line’s movement, did the job) and picking up their blocks, and Akeem Hunt did the rest.

So where did IU go wrong? Well, based on the slanting of the defensive line, it looks like Bobby Richardson was responsible for the gap between left guard and left tackle, while Flo Hardin, the SLB, who was rushing the passer, was responsible anything outside of the tackle (aka the “force” player).[ref] BTN analyst Chuck Long called this a blitz by Hardin. I assume Chuck would define a blitz as anytime a non-defensive lineman rushes the passer, which is a fair interpretation. In a 3-4, however, I don’t think you can call anything that isn’t a 3-man rush a “blitz.” Thus, in situations like this play, where only the SLB or the Bandit rush along with the 3 defensive linemen, I would not classify it as a blitz. Moving on.[/ref]   Presumably because Richardson read the play as a pass – the tackle’s block on him was not a normal run block – Richardson disregarded his gap and tried to move around the tackle to the outside in an attempt to get to the QB. This is exactly what a draw play is intended to do: get defensive linemen moving up field towards the quarterback, out of their gaps. So we already have a crease between the playside guard and the tackle. Next, TJ Simmons, who appears to be responsible for the gap between the left guard and the center, is a little slow at reacting to the run and moving downhill towards the line of scrimmage.  Consequently, the left guard met him a yard and half on the defense’s side of the LOS, which created more space for Hunt to operate.  Flo Hardin, working outside-in, for some reason grabbed for Hunt’s arm and shoulder-pad, rather than diving at his legs.[ref] To be fair, though, this was not Flo Hardin’s play to make.[/ref]

So the offensive line did a good job and beat IU’s DL and LBs, and Hunt made it to the second level. Fine. That doesn’t equate to an 84-yard TD run. That’s where the secondary – and Akeem Hunt’s crazy lateral quickness and straight-line speed – come in. Field safety Mark Murphy had shifted up to play a short zone because Flo Hardin was rushing.  Based on his alignment and responsibility, he really has no chance to impact the play.  Although we can’t see Antonio Allen at the snap, based on the movement of the rest of the linebackers and secondary, this looks like a Cover 3, with Allen responsible for the deep middle and corners Fant and Clark responsible for their respective deep thirds.  Again, I’m assuming Allen read pass at the snap, because he takes a loooonngg time to enter the picture. Hunt is 14 yards down field before we see Allen, and at that point, Allen is left stumbling as Hunter bounces outside. In an otherwise strong game for Mr. Allen, this was not his best effort. Likewise, Donovan Clark took a bad angle and allowed Hunt to beat him to the outside.

Lucky for us, IU only had one play where they truly got gashed so we can move on to the good stuff.

All season we’ve talked about the need for IU to get pressure on the quarterback. Usually, IU has needed to bring blitzers to create pressure. Against Purdue, more than any other game this season, the IU defense – and bandit Zach Shaw in particular – created pressure while only deploying 4 or fewer pass rushers.

In the 1st quarter, Purdue faced a 3rd and 11 on the IU 29. IU brought only three rushers, but for some reason, the Purdue tackle didn’t pick up Zach Shaw and he forced Austin Appleby to throw inaccurately.  Purdue missed the subsequent field goal attempt.

In the 2nd quarter, Purdue had a 3rd and 8 on the IU 9. This time, IU did bring a blitz, but it was only a 5-man pressure. Once again, Shaw forced an early throw by Appleby, which Greg Gooch knocked down.

Later in the 2nd quarter, another 3rd down, another 4-man rush by IU, another hit on the QB by Zach Shaw. This time, Appleby’s pass was picked off by Chase Dutra. Take a look:

Shaw wasn’t done. On Purdue’s first drive of 2nd half, they faced a 3rd and 8. IU went with a 4-man rush, but this time they ran a stunt, with Shaw cutting inside for a free run at Appleby. Appleby again threw before he was ready and Scales picked it off. Here you go:

One more. Late in the 3rd quarter, IU brought only 4 rushers on a 3rd and 6. Darius Latham and Bobby Richardson forced Appleby to step up in the pocket, where Tegray Scales made the stop, forcing the punt. Here is the video:

While Zach Shaw was solid throughout the season, this game was a clear step up. The bandit position in Brian Knorr’s 3-4 needs to get to the quarterback off the edge. We didn’t see enough of that this season from Shaw and Nick Mangieri. Maybe this game was a sign of things to come in 2015. Or maybe Purdue’s offensive line just had a bad day.

And Then They Blitzed

Because IU was able to generate pressure with its defensive front, they rarely needed to blitz. But in one crucial situation late in the ballgame, defensive coordinator Brian Knorr opted to bring pressure in a form that he’d shown only once or twice all year.  With the game tied at 16 , IU forced Purdue into a 3rd and 6 on the Purdue 39 with less than 4 minutes to play. IU came out with only 2 down defensive linemen, 6 defensive backs and 3 linebackers. IU had used this personnel grouping a few times in the first half after debuting it against Rutgers a few weeks ago. Like they did a few times against Rutgers, IU brought the house, with 7 rushers (both DL, all 3 LBs, corner Tim Bennett and safety Chase Dutra) coming after Appleby.  Purdue kept a tight end and a running back in to block so they had sufficient numbers to handle the blitz, but Tim Bennett came free nonetheless and forced Appleby to hurry this throw. IU played tight man behind the blitz. Appleby’s pass wasn’t terrible, but it was a little under-thrown and freshman corner Rashard Fant GOT HIS HEAD AROUND (it’s a miracle!!), avoided the pass interference penalty and knocked the pass away.  Pressure on the quarterback. Tight coverage with good technique. Yep, that’s what good defense looks like.