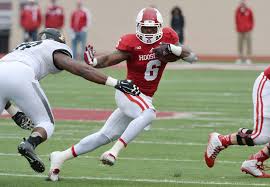 In last week’s big win over the Boilers, we saw strong performances by a bunch of guys definitely playing their last game as Hoosiers…and by one guy hopefully-not-but-probably playing his last game as a Hoosier. Let’s take a look.

TE: (1) Anthony Corsaro, (2) Michael Cooper and (3) Jordan Fuchs. The vast majority of the playing time went to Corsaro and Cooper, with about a 60/40 split between them.

C: Wes Rogers. Jake Reed was out again with an injury

RT: (1) Dimitric Camiel and (2) David Kaminski. Normal starter Ralston Evans missed the game due to injury. Kaminski, a redshirt junior who is not returning for his final year of eligibility, played for one series.

Some New Wrinkles in the Running Game

It may have been the last game of the season, but that didn’t stop the Kevins from tinkering with the running game. One change was evident in IU’s first play from scrimmage:

Looks like your standard quick toss that IU ran earlier in the season, right? Not exactly. Before the Purdue game, IU ran the quick toss exclusively to the short side of the field, using normal outsize zone blocking. Running it to the short side allows the playside tackle to get out and lead the play, and it generally makes it easier for the back to turn the corner.  Here, the offensive line blocked as if it was an inside zone to the left, which was the short side, while the quick toss went to the right, the wide side, where IU had trips.  The blocking misdirection worked, as the Purdue linebackers stepped to their right and couldn’t recover.  Running this version of the quick toss requires good blocking by the three wide receivers to the wide side. In this instance, Anthony Corsaro (a tight end lined up as a wide receiver), Shane Wynn and Simmie Cobbs did a solid job of clearing the way. Tevin did the rest.

In the 3rd quarter, IU picked up another 8 yards when they ran this version of the quick toss, and then a total of 14 more yards on 3 more iterations of the play in the 4th.

The next wrinkle added by the Kevins was a pulling tackle on an inside run. IU has occasionally pulled a tackle on an outside run this season, but it seems that the Kevins prefer to pull guards on both Power O’s and outside runs. Here, for the first time all season (as far I can recall), IU pulled its right tackle, Dimitric Camiel, to lead a run through the gap between the left guard and left tackle. Take a look:

The benefit for pulling the tackle is that it allowed right guard Dan Feeney to block Purdue defensive tackle Jake Replogle, who was lined up directly over him. If Feeney had pulled, Camiel would have had a hard time reaching Replogle. With Feeney handling Replogle, center Wes Rogers and left guard Colin Rahrig could focus on doubling the nose tackle, and they did so quite effectively, pushing him three yards back and creating room for Coleman. On the pull, Camiel picked up the playside inside linebacker, while the backside linebacker essentially blocked himself by getting stuck behind the double-teamed nose tackle.  Coleman cut off the block of Camiel into the space created by Rahrig/Rogers and broke into the second level. IU ran this play a few other times last Saturday, with varying levels of success.

Finally, IU dusted off a play that I believe they used at least once against Iowa with Chris Covington at quarterback. Trailing by 7 in the 3rd quarter and facing a 2nd and 9 on their own 45, Coleman lined up to Diamont’s left in the shotgun. At the snap, Diamont faked an outside zone to Coleman to the right, and then pulled the ball and took off to the outside on the left.  How is the this different from your standard zone read, you ask? Two ways: (1) the normal zone read (at least as IU has run it with Diamont) is just like an inside zone play for the running back with normal inside zone blocking, except the backside defensive end is left unblocked and the quarterback has the option to pull the ball and run to the backside if that unblocked defensive end crashes down on the running back. Here, Coleman was running an outside zone, where he runs parallel to the line of scrimmage in front of Diamont; (2) at the snap, rather than stepping to the right as they would if this was actually an outside zone to the right, the right guard (Feeney) and tackle (Camiel) pulled around to the left to lead Zander. Based on this blocking, my guess is this was not actually a read by Zander, but instead was a called fake.

Understandably, Purdue bit hard on the fake to Coleman. Camiel had a great block on the pull and Dominique Booth had an outstanding block on the corner. Diamont used his underrated speed and picked up 24.[ref] Couldn’t find video of this one, so you’ll have to take my word for it.[/ref]  A few plays later, Wynn scored the game-tying TD.

Going Out with a Bang

Four offensive players definitely playing their last game as Hoosiers[ref] Some would put Tevin Coleman in this category. For now, I’m leaving open the slight possibility that he decides to come back. But yeah, prepare yourself to watch a Coleman-less offense in 2015.[/ref] made huge plays in the 2nd half against the Boilers.  I discussed Nick Stoner’s big plays in the over/under recap, and we’ll talk more about catches on IU’s final 2 drives later.[ref] If the last four games of IU’s season showed us anything, it was the value of Stoner’s possession WR skills to this offense. It would have been nice to have him against Penn St., Rutgers and Ohio State, when his young replacements dropped virtually everything that came their way.[/ref]

I mentioned Wynn’s 2nd half TD. It came on a reverse that, like the Diamont run described above, took advantage of the Purdue defense flowing to the outside to stop Coleman. IU has used this reverse a number of times since Diamont assumed the quarterbacking duties, and it’s been a consistent success, including a long TD against Michigan State. Here, the backside defensive end and linebacker for Purdue reacted to the outside zone action and lost contain. Left tackle Jason Spriggs was the lead blocker. Watch as he put Purdue corner Frankie Williams on roller skates:

The rest was Wynn using the blazing speed that we have had the pleasure of watching over the past 4 seasons.

On IU’s final drive, senior D’Angelo Roberts replaced Tevin Coleman when IU reached the Purdue 30.  IU then ran two consecutive Power O’s that moved IU down to the Purdue 1. Each of those runs featured a key block by senior left guard Colin Rahrig (#64) and tough running by Roberts. Have a look:

Just textbook Power O blocking by the IU offensive line as a whole, and by Rahrig on the pull and kick out in particular.

Congrats to Stoner, Wynn, Rahrig, Roberts and the rest of the seniors on going out with a Bucket victory. Ideally, this group would have capped off their careers with a bowl game, but they deserve a tremendous amount of credit for the way this team, under their leadership, finished the season. It would have been very easy for them to mail the last four games in. Instead, they competed hard, held a lead in each of their last four games, and won a 2nd consecutive Bucket Game for the first time in 20 years.

He Earned That Cigar

Since we went pass-by-pass earlier this season when Zander struggled, it’s only fair that we do the same for IU’s last two drives against Purdue, when the true freshman made some key throws.

2. 2nd and 2, Zander hit Stoner again on a hitch for 5 yards. IU ran a hitch/flat combo that they used often against Purdue’s zone and Zander correctly read that the Purdue defenders jumped the tight end’s flat route.

3. 1st and 10, Zander bounced a screen pass to Wynn. Incomplete.

4. 3rd and 7, Diamont found Wynn in a soft spot in the zone behind Purdue’s linebackers. Zander appeared to look first to his left to Dominique Booth before moving on to Wynn in the middle of the field. Progression progress.

6. 2nd and 6, IU ran a hitch/flat combo to Zander’s left, and he appeared to have Wynn open on the hitch, but he flushed out of the pocket to the right and threw high and wide of Stoner. Incomplete.

7. 3rd and 6, speed option to the short side of the field. Purdue took away the pitch and Zander cut upfield and likely would have picked up the 1st down, had the Purdue corner not fought around Nick Stoner’s block.

That drive ended with a game-tying field goal.

8. 3rd and 2, Zander found Stoner along the sideline for 6 yards and a 1st down. A nice throw by Diamont, but an even better catch by Stoner.  If IU had failed to convert there, Purdue would have had plenty of time to drive for the win.

9. 2nd and 1, Diamont hit J’Shun Harris in stride on a bubble screen, and Harris took it for 12 yards and another 1st down.

10. 1st and goal, Zander kept it on a zone read and jumeds into the end zone for the game-winning TD.

All told, in the last 2 drives Diamont completed 5 of 7 for 40 yards and ran 3 times for 7 yards and a TD. In the second half, Diamont accounted for 115 yards (68 passing and 47 rushing). Perhaps more importantly, he avoided the back-breaking second half turnover that has plagued him.

If all goes according to plan, Zander will spend the next year and a half getting stronger and preparing to compete for a starting job as a redshirt sophomore in 2016.  Thrust into an incredibly difficult situation this season, Diamont showed that he has sufficient athleticism and accuracy on short and intermediate throws to play quarterback in the B1G. He needs to work on his decision-making, ability to read defenses and his strength – including arm strength.

Until we see the Zand Man again, we’ll remember him this way: 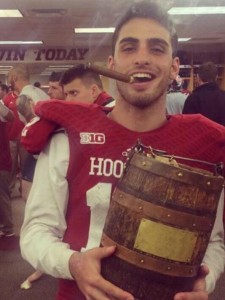