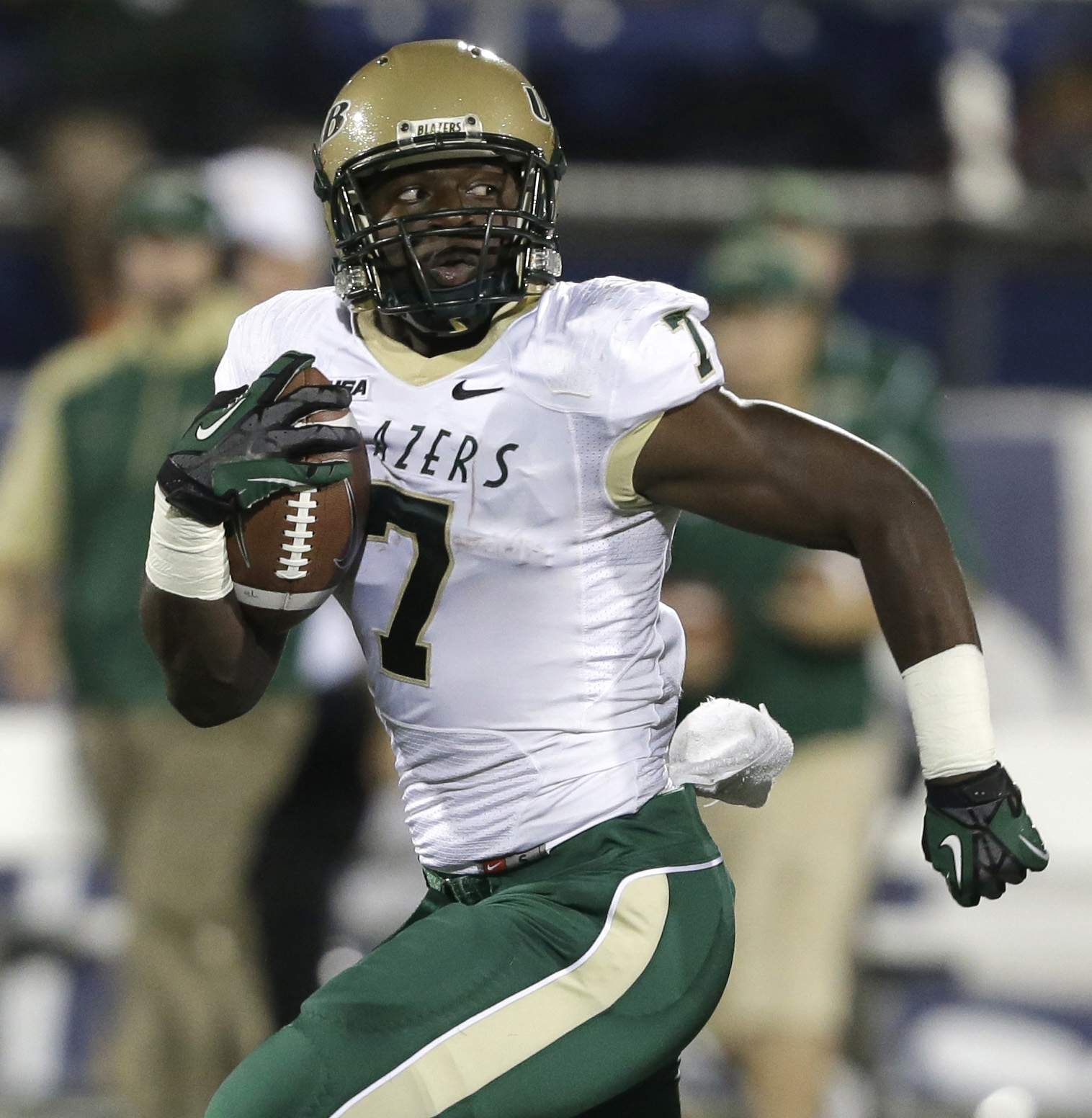 With news that former UAB running back Jordan Howard is headed to play at Indiana next season, we will examine the potential impact of the nation’s 7th leading rusher on a per game basis.

Having already produced the 2nd leading rusher in the nation, is it safe to assume that Howard will be back in the top 10 again in 2015?

I don’t think so. I think Howard will receive the majority of the carries, but the competition increase from the  C-USA conference to the Big Ten is enormous.

For example, Indiana and UAB shared one common opponent this season: North Texas. The Mean Green finished 125th in rushing S&P.[ref]Remember all that talk prior to the game of North Texas having a top 10 rush defense? Certainly why the quality of opponents must be a consideration.[/ref] Tevin Coleman ran 17 times for 150 yards. D’Angelo Roberts added 102 yards on 14 carries. Against North Texas, Jordan Howard was held to 67 yards on 16 carries.

Certainly it isn’t fair to Howard to make a judgment on one opponent. After all, the transitive property doesn’t apply to sports unless we are using it to crown Indiana as SEC East champions!

It isn’t fair to Howard to assume Coleman-like production in 2015.  Jordan Howard agrees.  “I’m not here to replace Tevin Coleman’s production,” Howard said. “I’m here to do the best I can.”

But I think his production against Mississippi State and Arkansas suggest his ability to be an important member of the Indiana offense.  Another factor to consider is that his performance was with the UAB offensive line.  The Indiana offensive line should have more talent and skill than UAB.

Howard is slightly bigger than Coleman, but lacks the same explosiveness that made Tevin such a lethal runner. When looking at 10 yard runs in 2014, Coleman averaged one 17.4% of his carries whereas Howard was at 16.3%. For comparison, D’Angelo Roberts was at 14.0%. Jordan Howard is able to move the ball forward nearly as well as Coleman in this manner.

As you can see in this clip, Howard does a great job of breaking though the line and into open space.  Tevin Coleman would have likely taken this run to the house,[ref]North Texas game notwithstanding[/ref] but Howard is a different type of back.  Expect a slightly more physical back.

Instead of comparing Howard to Tevin Coleman, a talent Indiana has not seen in 20 years, perhaps a better comparison is Stephen Houston. In Houston’s sophomore and junior seasons, when he was the primary running back, he averaged nearly 5 yards per carry but only had 4 carries of 50 or greater yards.

Elite explosiveness never described Stephen Houston yet he was very effective with the Hoosiers. He probably would have taken on a greater involvement in the offense his final 2 seasons had it not been for that Coleman fella. Houston was effective enough to latch on with the Patriots and Steelers for a bit.

With an experienced offensive line returning, Indiana now has a dependable running attack.  The Hoosiers no longer enter 2015 wondering what Devine Redding, Tommy Mister, or possibly Myles Graham can offer.  Having Howard in the fold solidifies that position and allows Indiana to focus on a questionable receiving core.[ref]And Redding, Mister, and/or Graham can offer a solid complimentary role which will likely improve their production on a per-play basis.[/ref]

Will Jordan Howard gain another 1,587 yards in 2015?  I highly doubt that he is able to do something that no Indiana running back had done since 1991 until Coleman this season.  But he will be productive and should give Indiana back-to-back thousand yard rushers for the first time since 2001.