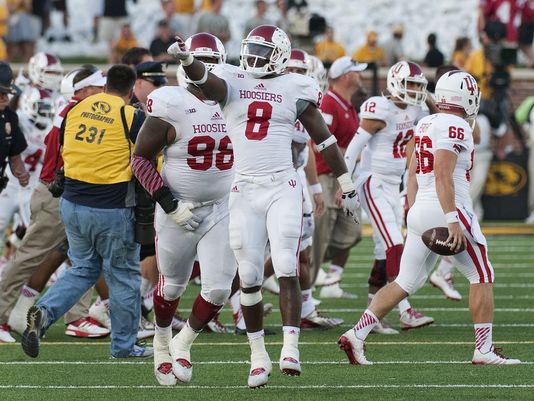 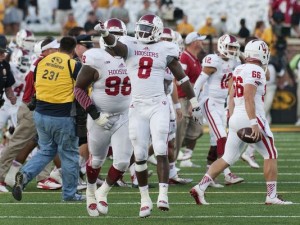 As part of his Indiana Spring Preview piece a few weeks ago, ESPN B1G blogger Brian Bennett had the following to say about IU’s defense:

3. Any optimism for the defense?: Brian Knorr brought in a new 3-4 scheme in his first year as defensive coordinator, but the Hoosiers mostly had the same, sorry results on defense. Once again, they allowed more than 30 points per game (which Indiana has done every year since 2007) and had a hard time stopping anybody in the conference. Nearly half the starters from last year are gone, including some key contributors in the secondary. Maybe that’s not such a bad thing, as Wilson has been recruiting better athletes for that side of the ball of late. It would be nice to exit the spring with some optimism for the defense, but seeing will be believing in the fall for such a consistently poor unit.

Mr. Bennett doesn’t seem particularly optimistic about the prospect of improvement for the Hoosier defense in 2015. Is he right? We’ll attempt to answer that question from statistical and personnel perspectives.

As you may have noticed, we don’t particularly like using traditional statistics like Total Yards or Scoring Defense around here. Among other issues, they aren’t adjusted for opponent or pace, they include stats from garbage time, and they frequently include stats from games with FCS opponents. Because Bennett cites to Scoring Defense (by mentioning how many points IU allowed per game), let’s momentarily accept Bennett’s premise that his chosen stat has merit and have a look where B1G teams fell in the FBS rankings of four traditional defensive stats in 2013 and 2014:

If we look at more advanced statistics, the story is virtually the same:

Here, the 2014 IU defense had the 4th largest jump in the B1G in Bill Connelly’s S&P+, the 2nd largest in Brian Fremeau’s FEI, and the 4th largest in simple Yards Allowed Per Play (YPP). The only decrease was in Connelly’s IsoPPP stat, which measures the extent to which an offense succeeds on its successful plays, (and based strictly on the changes from 2013 to 2014 in the B1G, IsoPPP appears to be a fairly volatile stat.)[ref] Not shown in the chart above is the IU defense’s 57-spot jump (from 117th to 60th) in Success Rate, a Connelly efficiency stat that measures the percentage of an offense’s plays that are successful, defined as gaining 50% of necessary distance on 1st down, 70% on 2nd down and 100% on 3rd or 4th down. That was the largest gain in the B1G. The defense may have given up a few more big plays in 2014 than 2013, but it drastically improved its ability to keep its opponent’s off schedule.[/ref]

To summarize, the 2014 IU defense improved on its 2013 iteration in 7 of 8 traditional and advanced measures.  In most cases, the improvement was among the biggest in the conference.  I understand the counter-argument, that IU had “nowhere to go but up,” and as such, their improvement isn’t that impressive.  But here’s the thing: for teams like IU with a particularly bad offense or defense, “going up” isn’t actually the only option. Staying right there at the bottom is a (more likely) possibility, as IU has shown over the past two decades. I’m not saying that IU’s improvement from 100th to 80th is as impressive as a jump from 40th to 20th – I’ll grant you that marginal improvements are easier to come by on the low end of the spectrum.  What I am saying is that across-the-board improvement – especially after a coaching change – is reason for optimism heading into the next season.[ref] And keep in mind, the defense was completely hung out to dry by an offense incapable of consistently moving the ball for the second half of the season.[/ref]

From a personnel standpoint, last season’s improvements are all well and good, but those improvements mean little looking forward to 2015 if all of the players that created that improvement are gone.  Bennett’s piece mentions that IU loses “nearly half” of its starters. In fact, it’s worse than that. Six of IU’s starters, Tim Bennett, Michael Hunter, Mark Murphy, David Cooper, Flo Hardin and Bobby Richardson, have moved on.  Without some context, that certainly seems like a significant number.  The chart below shows every player that saw at least a little non-garbage time action in 2014, with seniors/non-returning juniors in red:

Losing only 9 out of 30 contributors seems like less of a problem than losing 6 of 11 starters.  That’s right, 30 different players saw meaningful action for the IU defense in 2014.  Twenty-one players averaged at least a tackle per game.  Some only appeared for a few plays in a few games (like Robert McCray and Noel Padmore), but many of the underclassman rotated at close to a 50/50 split with the “starters” that have graduated. That was certainly the case with Chase Dutra and Mark Murphy at field safety and David Cooper and Tegray Scales at WLB.  That’s a somewhat hidden benefit of Brian Knorr’s decision to frequently rotate in 2014.  A host of freshmen and sophomores earned valuable experience that they would never have gained had Knorr stuck with a more traditional, smaller defensive rotation.

That being said, it would be wrong to dismiss the impact of last year’s seniors on the 2014 defense.  A common mistake of fans like me is underestimating the impact of departures.[ref]In fact, I made it just last year, as I failed to truly appreciate the value of Cody Latimer, Kofi Hughes and Ted Bolser to IU’s passing game until they were gone.[/ref]  The six departing starters all finished in the top 10 for tackles. Richardson led the team in tackles for loss and sacks. Bennett led the team (and in 2013 led the nation) in pass breakups.  These were valuable players, and (with the exception of Cormier, Heiderman and Kennedy) they all played at least half of IU’s defensive snaps.  They will be missed. IU will need to survive in September while new players move into the rotation.  The IU defense, however, will be better prepared to deal with those losses by virtue of its frequent rotations in 2014.

Speaking of the 2015 defensive rotation, just for fun, here’s a quick guess at what it might look like:

With Nick Mangieri moving inside to DE, Nile Sykes appears likely to rotate with Zach Shaw at Bandit.  The field OLB (or SLB) spot seems to be up for grabs, but Clyde Newton, as Flo Hardin’s primary backup, is the leader in the clubhouse, with redshirt freshman Dameon Willis behind him.  If last year is any indication, the rotation won’t be limited to these 23 guys.  Guys like Zeke Walker, Chris Covington, Will Dawkins, Laray Smith and any number of the true freshmen could see playing time.

With 21 experienced players returning, IU’s defensive personnel, like it’s statistical improvement from 2013 to 2014, presents reason for optimism.  No one expects the IU defense to challenge Michigan State, Penn State or Ohio State’s defensive dominance, but another year of incremental improvement is within reach.[ref] Just by the way, none of this is intended as a harsh critique of Brian Bennett. His piece was merely the conversation starter.  Obviously, Bennett and the rest of ESPN’s B1G guys focus on the teams with large, engaged fanbases because those people drive traffic to the site. Can’t blame them for that. When they do cover IU, its generally good pieces like this one on IU left tackle Jason Spriggs.  I don’t expect them to do deep dives on the conferences’s bottom-feeders. That’s what we’re here for.[/ref]