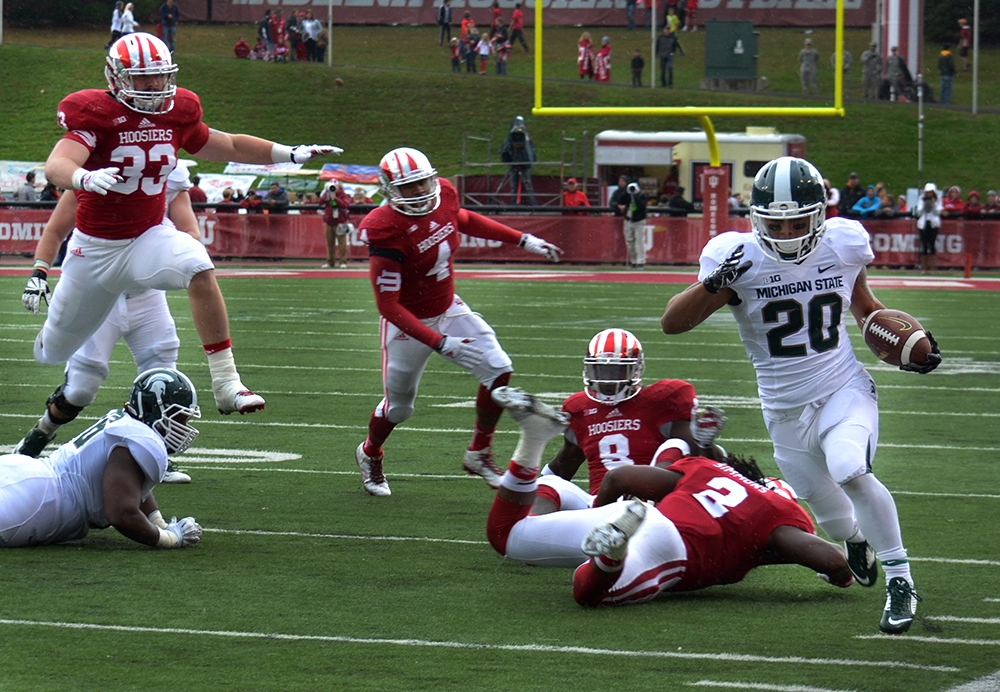 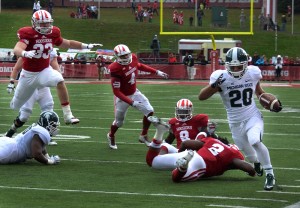 A statistic frequently cited in end-of-season articles – and that we’re sure to see in preview pieces in a few months – is that IU’s defense was last in the FBS[ref] 128th to be exact![/ref] in “Red Zone Defense.” The stat that’s actually being referred to is Red Zone Score Percentage(RZSP), which is the percentage of opponents’ red zone possessions that ended with either a field goal or a touchdown.  So that’s it, the IU defense was the worst in the country at defending the red zone, right? Well…not exactly.

Continuing with one of the overarching trends of PJP[ref] Hopefully, it won’t always be this way…[/ref], while IU’s defense was by no means good in the red zone, it wasn’t as bad as its RZSP ranking would lead one to believe.  To understand why, we need to understand what RZSP measures.  First and foremost, RZSP does not distinguish between touchdowns and field goals.  A score is a score.

Thing is, all scores are not created equal.  I haven’t checked the rules of football lately, but I believe a field goal is worth 3 points and a touchdown, along with a successful extra point, is worth 7 points.  If the opponent’s offense has penetrated the red zone, the defense has already failed to some extent.[ref] Barring a turnover or a special teams play, in which case, some other component of the team has already failed to some extent.[/ref]  If the defense then stiffens and forces the offense to settle for a field goal, they’ve salvaged something – four points, to be exact.  RZSP doesn’t recognize the value of a defense that bends but doesn’t break.

Because of this inherent weakness (and some others discussed later), RZSP is generally not a reliable indicator of defensive quality.  Case in point, Michigan State and Wisconsin finished 9th and 15th respectively in Bill Connelly’s S&P+ metric in 2014, and by any measure, including the plain old eye test, the Spartans and Badgers were strong defensively last season.  In RZSP[ref] All RZSP rankings used in this post are limited to FBS games.[/ref], however, MSU (89.3%) and Wisconsin (93.3%) finished 107th and 125th respectively.  On the other end of the spectrum, Tulane finished 71st in S&P+, yet somehow finished 2nd in RZSP at 68.6%.  To use RZSP to argue that IU was the worst at defending the red zone in 2014, one must accept that Tulane somehow morphed into a significantly better defense than Michigan State or Wisconsin when their opponents entered the red zone.

A more accurate – yet still potentially flawed – measure of defensive red zone effectiveness is points per red zone trip (“PPT”).  Its main advantage over RZSP is its incorporation of the separate scoring values of a field goal and a touchdown.  A team that allows 10 red zone trips and forces 10 field goals will have a lower PPT (3.0) than a team that allows 10 red zone trips and allows 7 TDs, while holding the offense scoreless on the 3 other possessions (4.9 PPT).  That makes sense.  If a defense forces its opponent to attempt a field goal every time they enter the red zone, that defense is doing its job, even if the opponent converts every field goal.[ref] For reference, the best team in PPT in 2014, Mississippi State, allowed 3.66 points per redzone trip. The worst, North Texas, allowed 5.88.[/ref] Sure, you’d love for your defense to force turnovers every time the opponent enters the red zone, but as we’ve discussed before, turnovers involve luck, and even when you’re lucky, they just don’t happen that often.

Using PPT, we see a marginally stronger correlation with overall defensive quality.  In 2014, the top 5 defenses in PPT (Mississippi State, Temple, Louisville, Ole Miss and UCF) were all in the top 50 of S&P+ (and three – Mississippi State, Louisville and Ole Miss – were in the top 15).  Still, Michigan State and Wisconsin remained outside of the top 100 in PPT.  We’re getting there, but PPT still doesn’t seem to paint the full picture of defensive red zone effectiveness.  To help us delve deeper, the chart below shows how the 14 B1G teams fared in various defensive red zone stats, including RZSP and PPT:

As the chart shows, IU was 9th in the B1G at 5.28 points allowed per RZ trip, good enough for 101st in FBS. Not great, by any means, but not dead last in the FBS.  With 15 red zone field goals allowed, IU was 2nd only to Maryland (16) in the conference.  In terms of the percentage of red zone trips that ended with a field goal, IU, at 34.88%, was second to defensive stalwart Penn State (35.9%) in the B1G, and was 6th in FBS, in the company of defensive elites like Alabama (1st), TCU (2nd) and Louisville (3rd).[ref] And University of Texas-San Antonio at 4th. Larry Coker’s Roadrunners were 66th in S&P+. So yeah, FG% isn’t foolproof either.[/ref]  If forcing an opponent to settle for a field goal is correctly viewed as a red zone win, then IU was actually successful as a red zone defense, regardless of whether the field goal was made.

But of course, RZSP and PPT aren’t calculated that way, and that’s another problem.  Barring a block, which is unlikely on field goals of any distance [ref] And especially unlikely on field goals within the red zone because kickers do not need to worry about driving the ball and can generally focus on getting the ball up in the air quickly [/ref], a defense has absolutely no control over whether the opposing kicker hits or misses.  A defense that happens to run into a bunch of good kickers may look like a weaker squad than they actually are, and vice versa.

In IU’s case, IU’s 11 FBS opponents made all 15 of their 16 red zone field goal attempts (IU blocked one) – which I’ll define as any field goal from 19 to 37 yards.[ref] Approximately 37 yards that is. Anecdotally, it seems that some teams are having their holders set up 8 yards back from the LOS rather than the usual 7, which would push the red zone field goal range out to 38 yards.[/ref]  College kickers generally convert 72% of their field goal attempts. I couldn’t find any data on kicks from 18 to 37 yards specifically, but let’s just say for the sake of argument that the conversion rate for kicks in that range is 85%.[ref]  I think it is more likely than not that the actual rate is lower than 85%, but we’ll be conservative for the purpose of this post.[/ref] Using that number, IU’s opponents should have missed between 2 and 3 RZ kicks last year.  Based on those numbers, IU probably should have had posted one or two more red zone “zeroes” than they did.

Missed field goals aren’t the only empty redzone trips over which the defense has no control.  The defense has no control over the offense’s decision to go for it on 4th down inside the red zone rather than kick an FG.  Sure, the defense is involved with stopping the 4th down play, but a defense that faces offenses that consistently go for it on 4th down in the red zone may, if they happen to get stops, look much better from a red zone percentage standpoint than a defense that plays offenses that always kick field goals.

Many times, game situation will dictate that decision.  IU’s recent history of red zone defense gives us examples of just that.  In 2013, Bowling Green was stopped on a 4th down in the red zone twice when IU had 18 and 32 point leads.  In 2012, IU stopped Illinois in a similar situation, with the Illini down 14 with under two minutes to play.  In situations like that, the offense’s only option is to go for the TD, and while the defense may have had something to do with the lead, it certainly wasn’t entirely their doing.

Those scenarios also touch on the final problem with regular red zone stats.  Like all mainstream college football stats, RZSP and PPT are not filtered for garbage time and end of half/end of game scenarios.  For example, a team driving late in the 4th quarter with even a small lead may not actually try to score, even if they enter the red zone.  If they opt to take a knee on the opponent’s 15 yard-line, that inexplicably counts a red zone stop for the defense.  The same is true for an offense trailing by 28 in the 4th quarter that throws a a red zone interception.  At that point, the game is decided, the stats simply aren’t reliable, but they still factor in mainstream red zone stats.

To drive the point home, take a look at IU’s red zone stats by year during the Wilson era:

I don’t think it’s a particular controversial position to say that the 2014 defense was the best of the Wilson era.  The marked decrease in red zone attempts is further evidence of that.  Nevertheless, the 2014 RZSP was the highest of the four seasons and the 2014 PPT was the 2nd highest.  Look a little closer, though, and the red zone stops in 2011-2013 don’t look as impressive.  In 2011, of the 6 non-scoring RZ trips, 3 were products of the defense in non-garbage time: an interception, a fumble and a punt after a sack.[ref] Illinois punted from IU’s 30. I miss Ron Zook.[/ref]  The other 3 were a bad snap on a field goal, and two teams that ran out the clock in the red zone.  In 2012, of the 7 non-scoring RZ trips, again only 3 were defense-forced in non-garbage time, all interceptions.  The other 4 were two missed field goals, a team running out the clock and the Illinois 4th down failure mentioned earlier.[ref] The usual cutoff for garbage time is 16 points in the 4th quarter, but I’m comfortable classifying a 14-point lead with under 2 minutes to go garbage time, at least for this post.[/ref] Likewise, in 2013, only half of the defense’s 8 red zone stops were its own doing.  The other 4 were 2 missed field goals, a bad field goal snap and an interception in garbage time. In 2014, IU’s 2 red zone stops were legitimate, as one was a blocked field goal and the other was Antonio Allen’s interception of J.T. Barrett against Ohio St.

So instead of looking at the chart above and seeing 6, 7 and 8 red zone stops compared to 2, when you actually consider the defense’s role in the failures to score, the numbers drop to 3, 3, 4 and 2.

In sum, when you come across IU’s woeful RZSP in various preview pieces between now and September, the next thing you’ll likely read is that IU needs to work on getting stops in the red zone.  Well, yes, that’s true to some degree, the defense needs to work on improving its play all over the field.  They need to focus on improving as a defense, period, regardless of field position.  A better defense will limit the number of red zone trips, force more field goals in the red zone, and should (subject to some luck factors) force more red zone turnovers.  If the defense builds on its 2014 improvement, some of that improvement may very well show up in red zone statistics. But if it doesn’t, I wouldn’t worry about it.