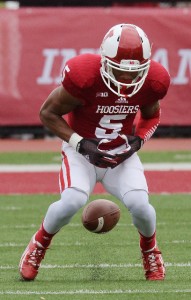 There are not many positives when discussing the 2014 passing game.  Overshadowed by deficiencies at the quarterback position, the new crop of wide receivers did not rise to either expectations or the level of prior years.  Lack of explosion was one weakness, but certainly not all pass catchers naturally possess this rather high level that Indiana fans have recently enjoyed.  A much greater concern was the inability to catch the ball in 2014.

We occasionally gave Tim Bennett a hard time for his inability to catch the ball.  It was mostly in jest because, you know, he plays defense.  However, when the players that are supposed to catch the ball are having such difficulty, we have a problem.

Even the Hoosiers best wide receiver was not immune.  No drop was more costly to Indiana than the Shane Wynn touchdown drop against Iowa.  Instead of the drive ending with 7 points, it ended with Nate Sudfeld’s injury and subsequently the IU season.

How bad was it for Indiana? 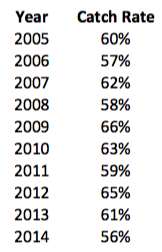 As we all remembered, it was pretty bad.  Using target and catch data available from Football Study Hall, I calculated the catch rate[ref]Catches divided by targets[/ref] for Indiana over the last 10 seasons.  While this spans three different coaches,[ref]And coaching changes would primarily come into play if the offenses were drastically different.  For example, a high percentage West Coast offense compared to a lower percentage vertical offense.[/ref] the results are very telling.  In 2014, Indiana had their lowest catch rate (catches/targets) in the last 10 season.  Also disturbing is the downward trend over the last 3 years.

The top season (barely) was 2009.  This was the Tandon Doss, Damarlo Belcher,[ref]Ironically, he would have his big drop, also against Iowa, the following year.[/ref] Mitchell Evans team.  This group was aided by 100% catch rates by running backs Darius Willis and Demetrius McCray.

The next best group, and tops in the Kevin Wilson era, was the 2012 crew.  Led by Cody Latimer, the Hoosiers also had Shane Wynn and Ted Bolser, both good pass catchers.  While the main core returned in 2013, they were slightly less efficient.  The Hoosiers were able to compensate this with a more explosive passing game, evidenced by a higher yards per target.

After losing Latimer and Bolser,[ref]Indiana lost Kofi Hughes and Duwyce Wilson as well.  Hughes had big play ability and Wilson was perfectly fine as a #4/#5 WR, but neither had a catch rate that was particularly great.[/ref] Indiana attempted to replace their offensive production with the likes of Nick Stoner and freshmen J-Shun Harris, Simmie Cobbs, and Dominique Booth.  It was a failure.  Yes, quarterback play was a factor.  Playing with Zander Diamont for half the year was a downgrade, but the job of a receiver is to catch the ball.  It did not happen often enough in 2014.

I looked at players that had greater than 5% of Indiana’s total targets in a particular season.[ref]I wanted to filter out players that had a very minor impact on the offense.  For example, Trea Buress’s 1 catch on 1 target 2007 season.[/ref]  In 2014, this was Wynn, Stoner, Coleman, Harris, Cobbs, and Booth.  Basically all the usual suspects.  Of the 65 IU players meeting this 5% threshold in the last 10 seasons,[ref]The same player could be included multiple times if they met the 5% threshold in multiple seasons.  For example, Shane Wynn is included 4 times[/ref]  Simmie Cobbs and Dominque Booth had the lowest 2 catch rates at 37% and 42%, respectively.

Can we expect improvement?

Can the young Hoosiers improve as well as fill the void left behind by Shane Wynn?  Perhaps a combination of freshman jitters and uneven quarterback play led to a sloppy first year.  Or maybe instead of finding the next Cody Latimer, the Hoosiers have the next Nick Stoner.  Or Duwyce Wilson.  Or Demarlo Belcher.  These were not bad players.  However, they had a role and they did it well.

Nick Stoner, a converted cornerback, had a 48% catch rate his first year at receiver.  While never possessing great hands, he thrived in a lesser role in 2013 averaging over 18 yards per catch.

Duwyce Wilson was fine as a #4/#5 receiver in Indiana’s heavily rotating receiver core with a 55% career catch rate.

Demarlo Belcher struggled as a freshman with only a 48% catch rate.  He improved over the next 2.5 years, before his dismissal, to finish with a career 55% catch rate.

All these players were productive for Indiana.  But none of them were considered #1 wide receivers.  Of Indiana’s players, one can reasonably see Cobbs fitting into a Duwyce Wilson role.  Dominique Booth is certainly capable of reaching a Damarlo Belcher level.  While he never reached the level of a James Hardy, Tandon Doss, or Cody Latimer, Belcher was extremely productive during his time at Indiana.  He led the team in targets his junior year and was 2nd his sophomore and senior seasons, even though he only played 2 months in the latter year.

The best Indiana passing game seasons have had a star wide receiver, a high catch rate slot receiver, and other complimentary players.  Think 2007, which was led by the explosive James Hardy.  After him on the depth chart were the dependable Andrew Means and Ray Fisher.  Or 2012 and 2013 with Latimer and Wynn.  These players were complemented by the aforementioned Bolser, Hughes, Wilson, and Stoner.  The Hoosiers struggled in 2014 with Wynn trying to fulfill both the star receiver role and the dependable receiver role.  The complementary players did not produce behind him..

Certainly the J-Shun Harris comparisons to Shane Wynn are appropriate and one would expect his catch rate to increase, particularly with Sudfeld back.  Perhaps he can fulfill the dependable slot receiver over the next couple seasons.

The Hoosiers can probably manage without a clear top wide receiver in 2015, but it certainly limits the ceiling.  Regardless, Indiana needs their full complement of receivers to increase their production.  The top teams in the past have had dependable depth as required in Kevin Wilson’s wide receiver rotation.  However, if one of the newcomers can add a high level of productivity to the Indiana offense, and certainly Camion Patrick has that potential, the Indiana offense should be fun to watch again.