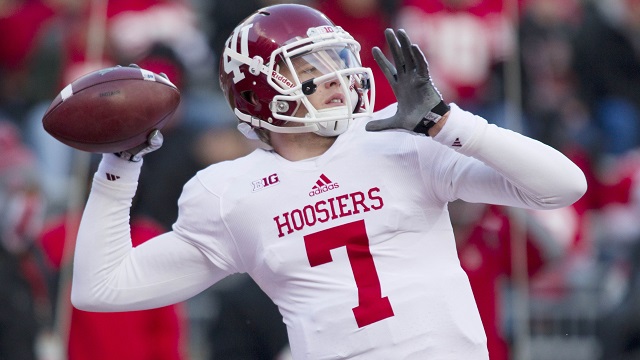 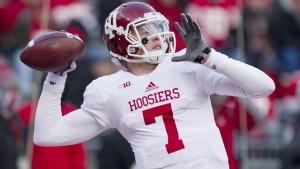 Yes, it’s true. Somehow IU quarterback Nate Sudfeld is already in his final year of eligibility.  In this post, we’ll examine Sudfeld’s IU career to date, and we’ll analyze what we can expect in 2015 in the next.

If it seems like Sud’s career has flown by, part of the reason is that he really hasn’t played that much.  He’s appeared in 25 games in his first three seasons of eligibility, but that number suggest more playing time than the reality.  He appeared in 7 games as a true freshman in 2012, following Tre Roberson’s season-ending broken leg in the season’s second game. [ref] By the way, it’s not difficult to imagine a scenario where Sudfeld is entering this season as a redshirt junior, about to enter his first season as the starter. If Roberson doesn’t break his leg against UMass in the second game of 2012, it’s certainly possible that Tre would have remained the starter for 2012, 2013 and 2014. Under that set of circumstances, Sud would have redshirted in 2012, played in limited duty in 2013 and 2014, and would finally assume starting duties in 2015 as a redshirt junior. Of course, all of that assumes that Wilson never would have given Roberson the hook in 2012-2014, and if he had, that Sudfeld would not have seized the job. Based on the somewhat quick hook we’ve seen from Wilson, that’s quite an assumption. I’m not saying I think the above scenario is particularly likely, I’m just pointing out that where we ended up was not a foregone conclusion.[/ref]  That year, Nate only played meaningful time in 5 games and didn’t start or play a single game from start to finish, instead serving more or less in a relief role for Cam Coffman, Roberson’s replacement as starter.  Here’s a chart breaking down the three 2012 quarterbacks by possession: 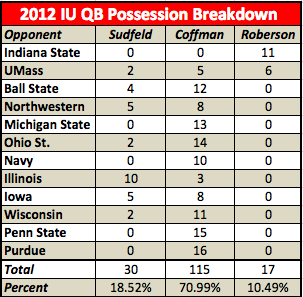 In 2013, although Roberson was healthy, K Dub opted not to turn the starting job back over to him. Instead, he rotated Sudfeld and Roberson throughout the year, generally riding the hot hand.  Here’s another possession chart: 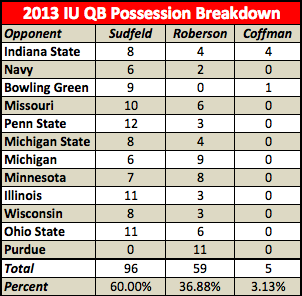 As the chart shows, the Sudfeld/Roberson split ended up around 60/40.[ref] For our purposes, possessions in which Roberson and Sudfeld both appeared were counted as one possession for each.[/ref]  At IU’s 2013 pace, Sudfeld saw a little more than 7 full games of action.

We all remember how Nate’s season ended in 2014.  After 5 full games and a little more than a quarter against Iowa, an injured shoulder knocked Sudfeld out for the remainder of the season.  Here’s the depressing possession chart: 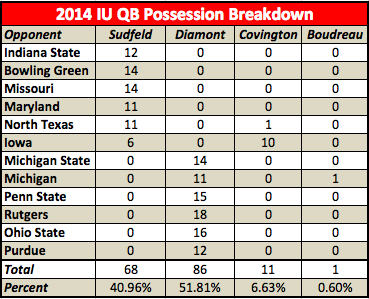 When Zander Diamont committed to IU in June 2013, when Sudfeld, Roberson and Coffman were all still on the roster, each with at least two years of eligibility remaining, what were the chances Zander would start half the possessions in his true freshman year? Way less than 1% right?? But it happened. So very IU Football.

Add it all up and through 3 seasons, Sudfeld has played right around 14 full games or just a little more than one full season.

Sudfeld In The Record Book

In terms of a single season, Sudfeld’s 2013 (in which he played 60% of the time) is statistically the 3rd or 4th best passing season[ref] The limitation to “passing” cuts out Antwaan Randle El and his 4 otherworldly dual-threat seasons. Those 4 seasons, along with Kellen Lewis’ 2007, would probably be the top 5 all-purpose seasons by IU quarterbacks.[/ref] by an IU QB in the history of the program. My (somewhat subjective, but mostly statistically-based) top 10:

We’ve seen stretches of stellar play from Nate over the past three seasons – and a few games we (and, I imagine, he) would like to forget.  Here’s my list of Sudfeld’s top 5 and bottom 5 performances, based on statistical output, opponent, game situation[ref] An informal attempt to filter out garbage time stats.[/ref] and to a lesser degree, because it’s not entirely in his control, game outcome.  To avoid ending on a low note, we’ll lead with Sudfeld’s five worst performances:

Throw out a 59-yard 1st quarter TD pass to Cody Latimer, and the numbers look even worse: 7 of 18 for 63 yards, 3.5 YPA and an INT. After four 1st quarter possessions that resulted in the Latimer TD and little else, Sud was pulled for Roberson, who proceeded to play one of his best games as a Hoosier.  With just under 9 minutes to play, IU took over at its own 2-yard line trailing by 2, following a Michigan fumble. Roberson had led the offense to 31 points in 5 2nd half possession to that point. Then Roberson injured his finger on a scramble, and Sudfeld was brought off the bench.  On his second play after returning, Sudfeld slightly under-threw a deep ball to Latimer, and it was picked off.  Michigan scored a few plays later to put the lead back to 9, all but ending the game.  Nate was placed in a difficult situation, but that one essentially game-deciding poor throw, coupled with a below-average 1st quarter,[ref] Especially when Roberson showed that the Michigan defense was there for the taking.[/ref] qualify this game for the “Worst performances” list.

Like the Michigan game, cut out a 1st half 77-yard pass to Latimer and Sud’s numbers look even more pedestrian: 20 for 38 for 152 yards and 4 YPA.  Really, the Mizzou defense dominated the entire IU offense so putting too much blame on Sudfeld is unfair.  Even Nate’s big mistake, an interception returned 49 yards for a TD by Kony Ealy, late in the 1st half when IU only trailed by 7, wasn’t entirely his fault.  Then-sophomore left tackle Jason Spriggs simply whiffed on his cut block of Ealy and the future NFL defensive end jumped up and made the pick when Sudfeld expected him to be on the ground (or at least have his hands down).  All that being said, Sudfeld certainly could have played better than he did, at home at night against a marquee opponent.

Michigan State dares offenses to throw it deep.  Oregon, Ohio State and Oregon took Sparty up on that dare in 2014 to devastating effect. In 2013, Nate Sudfeld and IU did plenty of throwing deep…they just didn’t do much completing. 4.6 yards per attempt. Woof.

Your mitigating factors here: terrible weather – rainy, cold, Wisconsin in November; no Tevin Coleman; a game that was over almost before it started because Wisconsin was just a much better team. None that excuses IU’s start, however.  IU’s first two possessions ended with turnovers: a interception on a poorly thrown deep ball and a botched exchange between Sudfeld and Houston.  Throughout his career, Nate has done a good job of taking care of the ball.  Just not on this wet, cold day in Madison.

The primary mitigating factor in this one was a receiving corps that just didn’t show up.  As I discussed in that game’s Film Study, IU’s receivers failed to bring in 6 catchable balls.  Even so, part of an upperclassman QB’s role is making sure his offense is ready to play, especially after a huge road win. The offense was decidedly not ready to play, and for that, along with that 3.4 yards-per-attempt, the 2014 Maryland game is Sudfeld’s worst performance as a Hoosier.

Enough of that. On to Sudfeld’s top five best games at IU:

Sure, Bowling Green’s pass defense was awful, but throwing 40 passes and completing 75% of them at 8.5 per pass is difficult to do in practice or 7-on-7, let alone in a game. That’s what Sudfeld did up in Northern Ohio last September, and he did it with a less than stellar receiving corps. Predictably lost in IU’s epic defensive gag job, Nate took the Hoosiers down the field for a go-ahead score late in the 4th quarter.  Aside from Bowling Green’s terrible defense and the unfortunate outcome, a third factor that kept this game from moving up the list was that Sudfeld really didn’t have to do much in the 2nd half until the last drive, because Tevin Coleman was running all over the Falcons.

Meticulously carving up the Midshipmen, Sudfeld posted career highs in yards and TD passes in this one. After coming on in relief of Tre Roberson and throwing a red zone interception in his first drive, Sudfeld’s next five possessions all traveled at least 76 yards and all ended in TDs.[ref] All in fewer than four minutes.[/ref] Unfortunately, IU’s defense couldn’t get a stop[ref] It literally made one of our friends sick in the stands. That, and the bourbon.[/ref], and the offense only had 8 possessions on the day. Such is life against Navy when you can’t stop the run. Two factors keep this game from placing higher on the list: (1) Navy’s pass defense was terrible in 2013; (2) that red zone interception early in the 2nd quarter. In a win, blowout defeat, or any game where the offense gets double-digit possessions, one red zone mistake can be overlooked. In a six-point defeat, when the offense only gets 8 cracks at it, even in an otherwise brilliant performance, that kind of mistake looms large.

The only B1G game in the top 5, this game and Sudfeld’s performance in it were diminished by IU’s failure to pick up that 6th win.[ref] More specifically, by an ill-fated and poorly executed lateral against the Gophs.[/ref] Coming off a 2-2 non-conference slate, IU opened B1G play against Penn State, a team it had never beaten. While this wasn’t a great Penn State team, they were a top 50 defense against the pass. The game ended up as a 20-point win, but the Hoosiers were trailing halfway through the 3rd quarter.  Sudfeld’s second TD pass was a thing of beauty: flushed from the pocket and moving to his right, Nate floated a pass 40 yards to the end zone, right over the defender’s shoulder and into the hands of a sliding Kofi Hughes.

While his stats don’t jump off the page, Sudfeld displayed his developing maturity in this one. Playing on the road against a top 30 defense vs. the pass and the eventual SEC East champs, Nate took care of the ball (0 INT, 0 fumbles), hit a few deep balls (one to Stoner in the first half that set up a TD, one to Harris for a TD in the second half) and, with the help of one Tevin Coleman, engineering a game-winning 4th quarter drive. This performance is all the more impressive when you consider the dearth of offensive weapons around him, especially in the 2nd quarter when Coleman was out with an injury. Two factors kept this game from the top spot: (1) the completion percentage, 54,5%, was a little lower than you’d like and (2) Mr. Coleman did quite a bit of the work on that final drive, taking a screen pass 44 yards to set up the game-winning score.

This is another game – and performance – that most IU fans would remember better if IU had made a bowl in 2013. Following a tough loss to Navy and facing a likely loss to Mizzou the following week, this matchup against Bowling Green was an absolute must-win that IU won handily.[ref] How many times in the last quarter-century has IU won a must-win game? And how many were in blowout fashion? Seriously, this might be the only one.[/ref] And this was a good Bowling Green team, by the way. The 2013 Falcons went 10-4, winning the MAC East and the MAC championship game and losing by only 1 point at Mississippi State.[ref] This was a significantly better team than the BG squad IU lost to in 2014.[/ref] They were also in the top 60 in the FBS in Defensive Passing S&P+. Sudfeld did not have to throw it very much, as Tevin Coleman and Stephen Houston each ran for over 130 yards, but when he did, he was extremely effective, racking up an incredible 12.9 YPA and just short of 20 yards (19.7) per completion. Most of his production, and both of his TD passes, came before the game was out of hand.