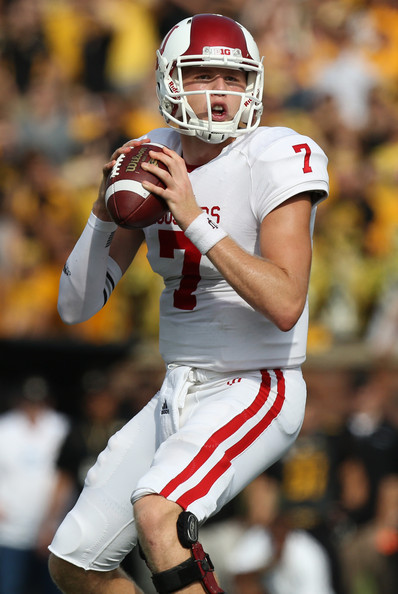 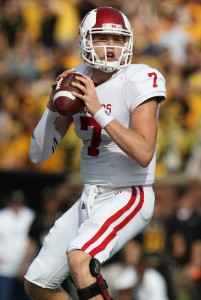 Last week we looked at Nate Sudfeld’s career to date. Today, we’ll consider what Sud might do in 2015.[ref] Quick disclaimer: this entire post assumes that Sudfeld is going to remain healthy for the entire season. I’m not willing to consider an alternative.[/ref]

As a starting point, we should set a likely production floor and ceiling.  To get a feel for ceiling/floor possibilities, here’s a look at Sudfeld’s career stats by season:

The ceiling is actually the easier of the two: just figure out the best way to extrapolate Sudfeld’s 2013 stats to a season where he’s the lone starter and go with that number.  Why? Because Sudfeld’s supporting cast in 2013 was fairly absurd.  A future 3rd round pick at RB (Tevin Coleman), future 2nd round pick at WR (Cody Latimer), a 7th rounder at TE (Ted Bolser) and three other NFL free agent signees in the regular rotation (RB Stephen Houston and WRs Kofi Hughes and Shane Wynn).  That’s a crazy amount of talent for a place like IU (or really anywhere), and Sudfeld and Roberson took full advantage. The fact that they didn’t make a bowl game remains depressing.[ref] Thanks, Doug Mallory![/ref]

There may well be future NFL players at the skill positions around Sudfeld in 2015, but, with the possible exception of Jordan Howard’s play at UAB, we don’t have any evidence of it yet.  Without a proven supporting cast, it would be unreasonable to expect Nate Sudfeld to improve on his 2013 stats, even if he raises his own level of play.

So how best to extrapolate Sud’s 2013 stats? Well, as we calculated last week, Nate played roughly 7 full games in 2013.  One quick-and-dirty method to estimate Sud’s full year production at his 2013 clip would just be to divide his 2013 numbers by 7 to get a per game rate, which can be multiplied by 12 to provide full season stats.  Take a look at that projection:

That’s quite the lofty ceiling. For context, 4325 yards would have been good for 4th in FBS in 2014; 36 TD passes would put him at 5th in FBS.  I think we can lower that ceiling to a slightly more reasonable level by using a little more in-depth method to extrapolate those 2013 stats.  The thing about 2013 was that any time Sudfeld struggled, he was generally taken out of the game in favor of Roberson (and vice versa).  So the roughly 5 games that Sudfeld didn’t play in 2013 were, at least to some extent, games in which Sudfeld would have struggled had he continued to play.  The problem with the first extrapolation is that Sud was being projected to play like his average performance level — which was quite good — without any recognition that some of the games Sudfeld didn’t play or didn’t play the entire game were against strong opponents like Wisconsin, Michigan State, Ohio State and Michigan.  A more realistic extrapolation would act as if the “Tre Roberson relief pitcher” didn’t exist, and Sudfeld had to play the entirety of every game at whatever level he’d established in the limited time he played.

The chart below show just that.  Each game shows “actual” and “projected” stats.  For games where Sud played the entire game, only his actual stats are provided.[ref] Or as much of the game as we would expect him to play, even if he wasn’t splitting time with a co-starter, like Indiana State game.[/ref]  For the Purdue game – the only game in which Sudfeld did not really play (aside from one snap) – Roberson’s stats are used, based on the assumption that Sudfeld probably would have done something similar against the 2013 Boilers.  The projections were made on a per possession basis, as in Sudfeld put up x amount of yards a possession in 6 possessions – what would he have done if he had also played the 6 possessions Roberson played? 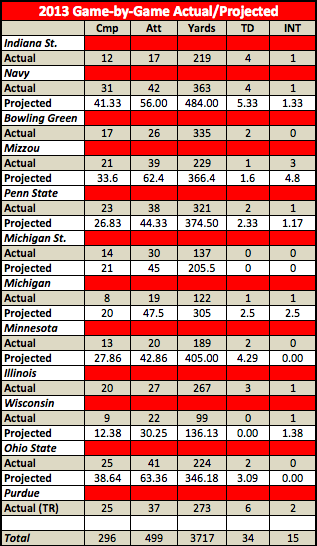 This method took about 600 yards and 2 TDs off Nate’s total and added a couple picks.  The projection might have been even lower, but Sud got nice bumps based on the possessions he missed against Navy, Mizzou and Minnesota (among others).  This projection is still on the high side, but I think it’s fair as a ceiling.

Figuring out the floor is actually little tricky.  My initial thought was to take last season’s pace through roughly 5.5 games, extrapolate out to 12 games and call it a day.  That would look something like this:

The numbers weren’t great, which is why it makes sense as a floor, but we can be a little more precise.  Three of the 6 games that Sudfeld missed in 2014 were against defenses in the top 13 of Defensive S&P+ (Michigan State, Penn State and Ohio State) and another game was against a top 40 defense (Michigan).[ref] Which speaks to the hellacious situation in which poor Zander found himself.[/ref]  In contrast, 2 of the 5 games Sudfeld played were against defenses outside of the top 100 in Def. S&P+ (North Texas and Bowling Green).  On the other hand, Sudfeld performed well against Missouri, the only top 20 defense he faced.

To project Sudfeld’s production over those four games against top 40 defenses, I took the average of his production against Missouri and Maryland (just outside the top 50 defensively), which worked out to 16 of 35 for 189 yards, 1 TD, 1 INT, 5.4 YPA.  That seemed about right.  For the remaining games against Purdue (81st in Def S&P+) and Rutgers (82nd), I took the average of Sudfeld’s numbers against North Texas (123rd), Bowling Green (106th) and Iowa (63rd), projected from his 1.5 quarters of action against the Hawkeyes.  I multiplied the “good defense” average by 4 (for the 4 remaining games against good defenses) and the “bad defense” average by 2.  I added those numbers and a projection for the rest of the Iowa game to his season numbers. The totals:

Sudfeld’s yards and TDs actually ticked up slightly in this version, while is completion percentage and YPA dipped.[ref] Sud’s terrible Maryland game and the Indiana State game in which he barely threw held  down the first projection.[/ref]

But does this really represent Sudfeld’s floor in 2015? On the negative side, he lost his top two running backs, including a 2,000 yard rusher, and his top 2 wide receivers.  On the plus side, he will probably be playing behind the best offensive line of Coach Wilson’s tenure, the out of conference schedule has eased up, with Missouri replaced by Wake Forest, and he finally had an entire offseason and spring practice where he was The Guy.  Assuming two or three of the wide receivers develop into competent targets[ref] The odds of this happening certainly increase if juco receiver commit Camion Patrick qualifies academically, which as of K Dub’s last public statement, remains up in the air.[/ref], I’m comfortable calling the positives and negatives a wash.

The chart below shows both the ceiling and the floor, as well as the midpoint between those two numbers:

The midpoint would represent Sudfeld’s best season and would leave him as the all-time IU leader in TD passes, 2nd in passing yards and 2nd in completions.  Gun to the head, I would probably pick a number between the midpoint and the floor, given the uncertainty at the skill positions, especially wide receiver.  Mark me down for 252 of 421 (59.8%) for 2950 yards, 21 TD, 10 INT, 7.0 YPA, 246 YPG. I hope he blows those stats out of the water.