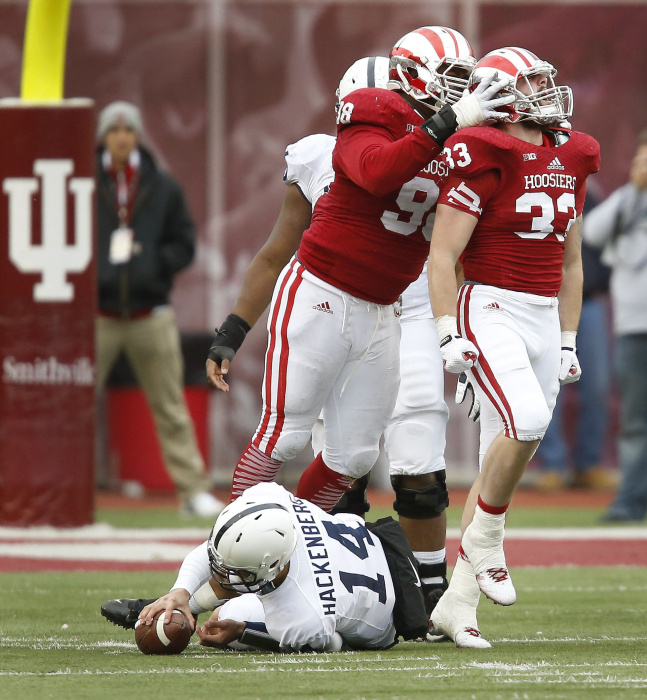 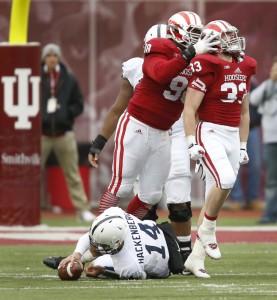 The Indiana Hoosiers finished the 2014 season ranked 82nd in sacks with 23.  This was following a 20 sack season which ranked 87th.  Suffice to say, the Indiana pass rush has been minimal since the Bill Lynch days of Greg Middleton and Jammie Kirlew.  During the Kevin Wilson era, the coaching staff has yet to develop a true havoc-creating pass rusher.  It remains to be seen if one will develop in 2015.

The 2014 season was pretty much par for the course under a Brian Knorr-led defense.  Dating back to 2012, his defenses have tallied between 23 and 25 sacks.  The sources of the sacks have also been fairly consistent.  Nearly 2/3 of all sacks have come from the defensive line with almost all of the remaining third coming from the linebacking core.  While the secondary has occasionally blitzed, this has not been a point of emphasis.

We left the 2014 season with DE Bobby Richardson leading the team with 5.5 sacks, although 3 of these sacks were against Indiana State.  Richardson is the only player on the defensive line that the Hoosiers will lose.[ref]Ralph Green is currently suspended but is expected to return to the team sometime this fall[/ref]  Nate Hoff was 2nd on the team with 3.5 sacks.  These were the only 2 players to record more than 2 sacks on the season.

Since the end of the season, Nick Mangieri has moved from Bandit to defensive end replacing Richardson.  With Mangieri’s size, he certainly seems like he will have a bigger impact in his return to the defensive line, where he played his first 2 seasons, than during his year as a linebacker.  While possible he matches Richardson’s 5.5 sacks, it seems unlikely considering Richardson was the first Hoosier recording this total since 2009.

On the rest of the line, Nate Hoff and Darius Latham have some of the biggest potential for providing a consistent pass rush.  While he weighs about 50 pounds more than former Wake Forest NT Nikita Whitlock, Nate Hoff possesses the same pure strength.  In 2013 under current IU defensive coordinator Brian Knorr, Whitlock lead the Demon Decons with 9 sacks.  Despite being a massively undersized NT at 5’10” and 250 pounds, Whitlock used his speed and strength to disrupt opposing offenses.

Credit Knorr and his staff for figuring out how to best utilize a player like Whitlock.  The former Wake Forest standout is speedier than Hoff with a 4.82 40 time compared to Hoff’s 5.08, but their strength is very comparable.  Whitlock benched 43 reps of 225 pounds at his pro day.  Hoff reportedly benched 39 reps of 224 pounds this offseason.  Despite the slightly slower speed, hopefully Knorr can figure out a way to similarly utilize Hoff in Indiana’s 3-4 system.

Darius Latham possesses the natural ability and has shown glimpses of great play, but has only 3.5 sacks in his career.  The best case scenario would be that 2015 is the year that everything clicks for him.  His freshman year he was adjusting to the college game.  Last year he was learning a new defensive scheme.  Perhaps this is the year he takes the next step.  He flashed some of that potential in the spring game when he recorded a half sack.[ref]And added an interception to which Nate Sudfeld tried to tackle him .  Seriously Nate, run the other direction.[/ref]

The projected 2015 defensive line recorded 9 sacks last season with the only drop-off from Richardson’s 5.5 to Mangieri’s 2 sacks.  Despite this, I think it is reasonable with gains made in the off-season and being the second season in this system, the defensive line will build on their 2014 campaign.

Indiana loses Flo Hardin to graduation and Nick Mangieri to the defensive line.

Replacing Mangieri will most likely be a rotation of Zack Shaw (career 5 sacks) and redshirt freshman Nile Sykes.  Perhaps Shaw, a former linebacker when he arrived on campus, will feel more natural in his second season at the Bandit position.

As one of the most important positions for sacks in this defense, it is imperative that Indiana has consistent production.  Last season Mangieri and Shaw combined for 3.5 sacks which simply didn’t get the job done.  One of the most important pieces of a 3-4 defense is a consistent pass-rush, particularly since they are undersized with only 3 defensive linemen.  The advantage of playing fast and disruptive in a 3-4 defense is compromised without dynamic play from this position.  It remains to be seen if Indiana can develop a consistent pass rush from the Bandit although one would expect IU to better the 3.5 sacks recorded in 2014.

At the middle linebackers, Tegray Scales moves from rotating with David Cooper to starter at WLB.  With his natural speed and playmaking ability, Scales should improve on his 2 sack freshman campaign.  TJ Simmons returns at the other MLB position, but is more of a run stuffer and shouldn’t be counted on to increase his 2 sacks.

Greg Gooch should be a backup at one of the middle linebacker positions and offers a dynamic combination of size and speed.  With additional playing time, he will be expected to record his first sack in 2015

The field OLB position is up for grabs following Hardin’s graduation, but Clyde Newton (career 0.5 sacks) appears to be the primary option.  This position is generally focused on containment and will not be counted on for a heavy pass-rush.

As stated earlier, the secondary isn’t a prime pass rushing position like the defensive line, WLB, or Bandit.  Their primary responsibility will continue to be pass containment.[ref]Let’s just have them focus on this, mmmkay?[/ref]

It is doubtful that Indiana develops a player in 2015 to single-handedly wreck havoc.  Those players are both hard to recruit and hard to develop.  The best case would be a total team effort.  Both Hoff and Latham should increase their sack totals.  I don’t think it would be unreasonable for those players to combine for at least 8 sacks.

The bigger key, as well as question mark, will be the the weakside pressure from Mangieri and Shaw.  For Indiana to elevate their pass rush, these 2 players[ref]With assistance from their backups[/ref] need to make more gains.

While unreasonable to expect Indiana to be in the top half of FBS team sacks, the Hoosiers have the ability to finish with nearly 30 sacks.  Moving from below average to average isn’t a great improvement, but when your defense has been as maligned as Indiana’s the last several years, any advancement is a positive step.