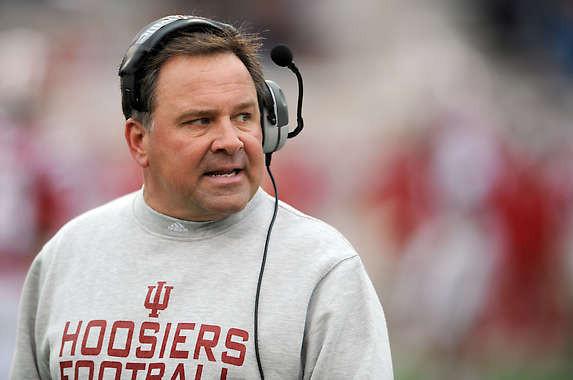 You all remember John Feinstein’s classic 1986 book, “A Season On The Brink,” or maybe the not-so-classic Brian Dennehy ESPN made-for-TV movie by the same name. The football version (minus Dennehy and without the subsequent national championship season) is set for release this fall.

Feinstein’s title refers to the precarious position that the highly successful IU basketball program found itself in following a rough 1984-1985 season. The book followed the 1985-1986 team and its tempestuous leader, Bob Knight, as they battled to get back to where they had been just a few years earlier.  Obviously, IU football is not fighting to get back to a similar level of national success, but the team and its coach have arrived at a season that, like the 1985-1986 IU basketball season, feels like a crossroads.

How did we get here? A quick review is in order:

If you’ve frequented PJP for the past year, you know we’ve been fairly bullish on Coach Wilson and his staff, but even the most diehard Wilson supporter cannot deny that momentum has been lost.  Some of the lost momentum shows up in recruiting, especially in-state, which has been somewhat slow, as B1G newcomer Jim Harbaugh has poached a few Indiana high school stars and IU’s opponents have likely used Kevin Wilson’s uncertain status against him.

That loss of momentum, the arrests, the losses, the failure to earn bowl eligibility, have put Wilson’s job in jeopardy.  Tom Crean’s relative struggles with the basketball team haven’t helped, in that they have potentially placed Wilson’s staunchest supporter, AD Fred Glass, at risk for standing by Crean.  There’s a scenario in which Wilson keeps his job with a 5-7 season featuring competitive, close losses, but if Glass is no longer AD, that scenario likely disappears.

A poor season – something less than bowl eligibility, with several ugly losses – spells a coaching change.  That would usher in another slow rebuild.  Programs like IU don’t do quick turnarounds after coaching changes.[ref] Neither Urban Meyer nor Gus Malzahn is walking through that door.[/ref]  2016 may well look like 2011 all over again.[ref] I would argue that Wilson, if he goes, will leave the cupboard better stocked than his predecessor, but coaching changes almost always lead to massive turnover so who knows if any of the talented underclassmen on the roster would stick around.[/ref]

On the other hand, momentum in college football is volatile.  One strong September could put the program right back on track.  And, for the first time in the Wilson era, the schedule gives the Hoosiers a real shot to string together some early Ws.  Southern Illinois and Florida International offer opportunities to break in new starters and establish an identity.  A huge home game looms against a good Western Kentucky team[ref] With everybody returning on one of the best offenses in CFB in 2014.[/ref], but a competent B1G team, playing at home, should handle even a strong Conference USA squad.  A road game against Wake Forest will be a challenge, but with the Demon Deacons coming off a 3-9 season, a win in Winston-Salem is well within the realm of possibility. What you don’t see are any games against a strong Power 5 opponent (Mizzou) or a particularly difficult challenge in Weeks 1 or 2, as in earlier KW seasons (Ball St., Navy, Bowling Green).

From there, the home B1G schedule presents some opportunities, with Rutgers, Iowa and Michigan coming to Memorial Stadium.[ref] We don’t need to talk about that first B1G home game.  Maybe if all three All-American QBs get hurt in September…[/ref]  IU likely won’t be favored in any of those games, but all three of those programs have some vulnerabilities.  Road trips to East Lansing, Happy Valley and College Park probably won’t end well, but a visit to Purdue should be manageable, even with an improving Boiler squad.  Notching 2 or 3 wins in conference is doable, and with a good September, that should be enough for bowl eligibility.

A bowl-bound season likely buys Wilson a contract extension, and the combination of on-field success and coaching stability should improve recruiting, especially in-state.  The team would benefit from an extra few weeks of practice. And oh yeah, we’d all get to enjoy our first bowl game since 2007 and second since 1993.

To be sure, there’s reason for optimism here.  The team will be led by an unquestioned senior starter at QB, who happens to have NFL size and tools.  The offensive line should be a strength, with at least two possible NFL players in the mix (LT Jason Spriggs and RG Dan Feeney).  Jordan Howard could very well step into Tevin Coleman’s shoes and be All-B1G.  On defense, the front seven, at least on paper, is as stout as any in recent memory.

But the margin for error is perilously slim.  Barring remarkable improvement by Zander Diamont[ref] Or promising true freshman QB Austin King being far more ready for primetime than we think.[/ref], any significant injury to Nate Sudfeld likely dooms the season, just like 2014.  There is very little room for the early season slip-ups that have plagued Wilson’s first four teams. The secondary is extremely young and largely inexperienced.  There’s isn’t a single established threat at receiver or tight end.  The special teams are nothing to write home about.

Things could easily go wrong for the Hoosiers in 2015, and consequences of a failed season are fairly dire.  But the season just might turn out alright.  One or two plays will make the difference. Yes, Kevin Wilson, his team, and the battered and bruised Hoosier faithful are perched precariously on the brink.  Here’s hoping we don’t all tumble into the abyss.