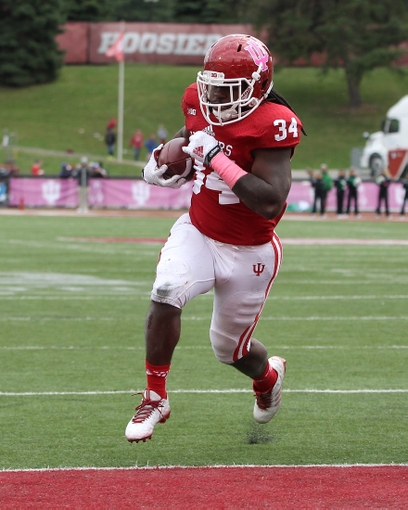 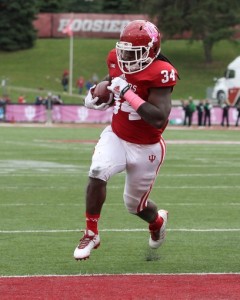 Next up in our Five Factors series: Finishing Drives.

As we discussed in last year’s post about Finishing Drives, this factor is really about two things: (1) how many times does your offense enter the scoring zone and (2) what does the offense do when it gets there (and vice versa for the defense)?  According to Bill Connelly, if you tally more scoring zone possessions than your opponent and you score more points per trip, you’ll win 98% of the time.  In defining the scoring zone, we part ways slightly with Connelly, who defines it as trips inside the opponent’s 40 yard line.  We prefer to use the 35-yard line as the cutoff for the scoring zone, primarily because we view it as a marginally more realistic point from which a college offense can expect to score.[ref] What with college kickers being college kickers and all.[/ref]

With that in mind, let’s take a look at how the 2014 Hoosiers fared in this factor:

Offensively, one obvious takeaway is the importance of Nate Sudfeld.  The chart below shows  the IU offense’s scoring zone numbers before and after Sud’s injury[ref] The Iowa game is excluded for simplicity.[/ref] and compares the 2014 total to the 2013 numbers.

Sudfeld’s numbers, albeit against two weak defenses (North Texas and Bowling Green), one mediocre defense (Maryland) and one very good defense (Mizzou), are right in line with 2013’s production.  The drop-off following Sud’s injury was predictably steep.  On average, IU made two fewer trips inside the 35 with Diamont at the helm, and did less damage when they were there, scoring almost 2 fewer points per trip.

That being said, it’s not like there wasn’t room for improvement by the Sudfeld-led offense.  One of the main contributors to IU’s disastrous loss to Bowling Green was a failure to finish drives.  There was a missed field goal, three failed 4th down conversions[ref] Including two with Chris Covington at QB in an unfortunate harbinger of things to come.[/ref] and a Coleman fumble.  Only scoring 35 points on 10 trips inside the 35 was a massive failure. Likewise, only penetrating the 35 twice against Maryland and failing to get in the end zone on either trip, against a defense ranked 55th in S&P+, just won’t get it done.[ref] Even if Sudfeld had stayed healthy, there is no way the offense would have matched its 2013 numbers for the whole season.  Games against strong defenses like Michigan State, Penn State and Michigan would still have been tough on a Sudfeld-led offense as well.[/ref]

As it did for the program itself, the Mizzou game showed the offense’s potential at finishing drives: six trips inside the 35, 31 points, against a top 20 defense in pretty much every metric.[ref] IU scored 4 TDs, made 1 FG and missed 1 FG.[/ref]

For the defense, if you happened to check in on us during the offseason, you might recall that we looked at IU’s red zone defense. The point there was to dispel the idea that IU was actually the worst red zone defense in 2014 simply because it was 128th in FBS in the stat commonly referred to as “Red Zone Defense.”[ref] Which actually refers to red zone scoring percentage.[/ref] We’re looking at something a little different here, most notably because we are looking at trips inside the 35, rather than the traditional red zone, but the story is much the same.  IU wasn’t the worst in FBS at stopping its opponents from finishing drives, but it wasn’t exactly threatening “average” either.  Take a gander at the numbers below:

On the whole, the numbers show some improvement from 2013. The Hoosiers allowed almost one fewer trip inside the 35 and forced a slight decrease in PPT.  Take out three terrible performances in the middle of the season – against Iowa, Michigan State and Michigan – and the improvement over 2013 is significant.  How much the defense’s struggles in that part of the year related to the offense’s struggles is tough to say.  They laid an absolute egg against Iowa before Sudfeld went down.[ref] And then, it should be noted, rallied to keep the game reasonable.[/ref] But the offense’s inability to move the play with any regularity had to play some role. Credit the coaching staff and the players for keeping things together and holding IU’s final 5 opponents to 4.4 PPT or less.

Offensively, the issues are consistency and health.  Keep Sudfeld healthy and replicate (or come close to replicating) the 2014 Mizzou performance, and the numbers will rebound to 2013 levels or above.  Lose Sudfeld for any period of time or turn in 2014 Maryland-type drive-finishing performances, and we’re looking at a 2014 repeat.  Assuming a healthy Sudfeld and given a strong offensive line and two power backs in Jordan Howard and Devine Redding, I expect a return to 2013 form, at the very least.  I don’t think this offense will score anywhere near as frequently from outside the 35 as the 2013 or 2014 squads did – without Tevin Coleman, Shane Wynn,  Cody Latimer or Kofi Hughes – and that makes converting from in close all the more important.

Defensively, the opposite is true. Given the well-documented secondary issues, we should expect some long TDs.  In the relatively tighter spaces of the scoring zone, however, IU’s improved front seven should hold its own.  If they can avoid those few clunker games, like Iowa/MSU/Michigan in 2014, then the defense should improve in the “finishing drives” factor.