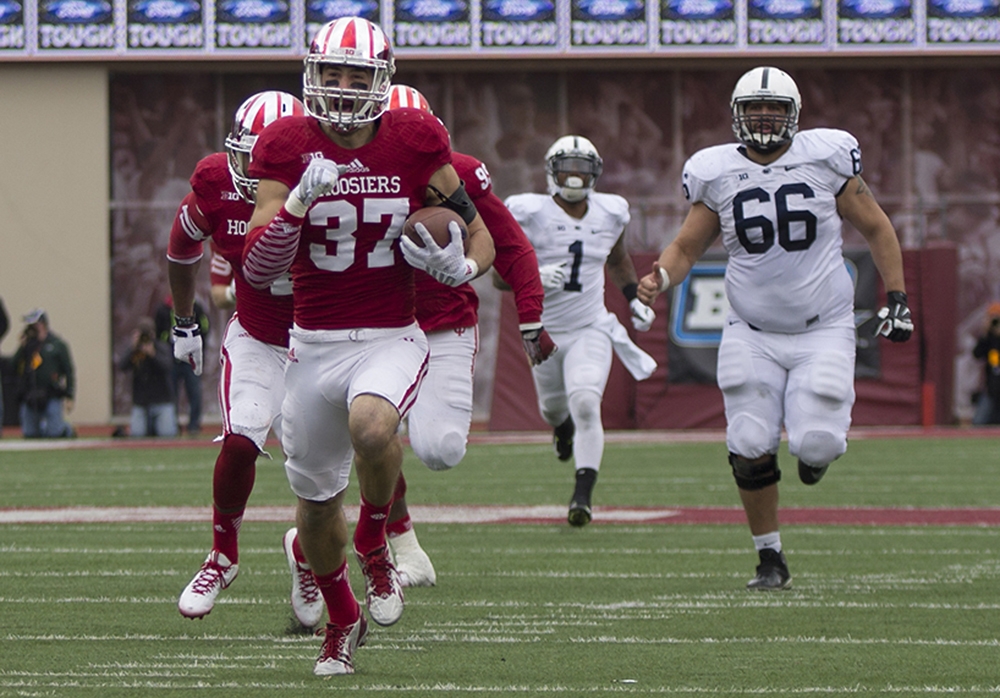 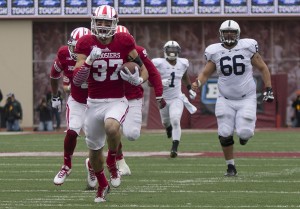 We have looked at Explosiveness, Efficiency, Field Position, and Finishing Drives this week.  We complete our series today with an examination of Turnovers.

We know turnovers are important, but how important they are is less clear.  According to Bill Connelly, if you win the turnover battle (using turnover margin), you win 73 percent of the time.

However, compared to the other 4 factors, turnovers actually appears to have the smallest impact.  Just looking at the National Championship game, Ohio State was able to overcome a large turnover difference, by dominating in Efficiency, Field Position, and Finishing Drives.

That doesn’t mean turnovers is not important.  Just less important than some of the other factors and certainly less controllable.

A look at a few of the measures:

Indiana fumbled the ball 20 times last season, recovering 10 of them which is exactly as expected.  Indiana forced 9 fumbles and recovered 4 of them.

While the Hoosiers recovered pretty much the number of fumbles they should have, it is important to note that IU was definitely less protective of the ball than their opponents.  Preventing fumbles or forcing fumbles is more of a skill and one that IU was not great at.  Recovering fumbles is based more on luck.

In the air, Indiana opponents defended 49 of Indiana’s passes.  Using the 22% metric, that would equate to nearly 11 interceptions; however, Indiana threw just 9 interceptions.

On defense, Indiana defended 60 passes, snagging 13 interceptions.  This is pretty much on par with the expectation.

While Indiana was a bit fortunate through the air, what these statistics tell me is that the Indiana pass defense was more active, on average, than their opponents.  As a result, the IU defense was rewarded by having more interceptions than ones thrown by IU quarterbacks.

Overall, Indiana was slightly above average in turnover luck, but in the grand scheme of things, you are looking for extreme outliers.  That is what the Hoosiers encountered in 2013 when they were one of the unluckiest turnover teams. 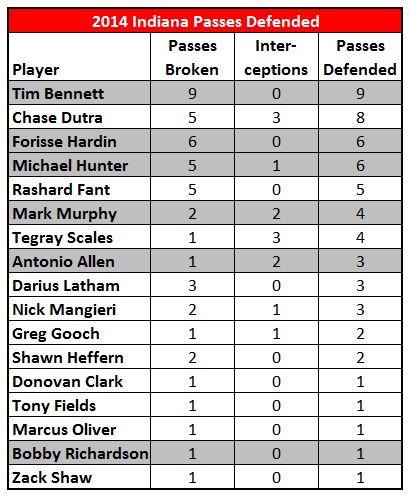 Due to their unpredictable nature, turnovers will be tough to estimate in 2015.  As we’ve learned, just looking at fumbles lost and interceptions can be misleading due to good or bad luck.  It is better to look at the number of fumbles[ref]The number of times the ball is on the ground, not fumbles lost[/ref] and the number of passed defended.

Not that Sudfeld never fumbles, but 6 of the 20 fumbles came from Covington and Diamont.  Sudfeld has had 1 fumble in the last two seasons.

The Hoosiers also had 5 special teams fumbles last year.  For a position whose most important job is to protect the ball (or safely punt the ball), this total was simply unacceptable.  Indiana had 2 fumbles (Booker dropped punt return and the Toth punt disaster) against Rutgers that were lost and led to 14 easy points.

For passes defended, Indiana loses Tim Bennett, the top defender in this statistic.  Losing Bennett hurts as he was active in pass defense, his inability to catch the ball notwithstanding.  However, Chase Dutra had 8 passes defended to lead all returning players.  Rashard Fant should have more passes defended in an expanded starting role as will the corner opposite him.  What would really help the pass defense would be a solid pass rush.  Whether that will occur remains to be seen.

We will be back Monday for Season Over/Unders.