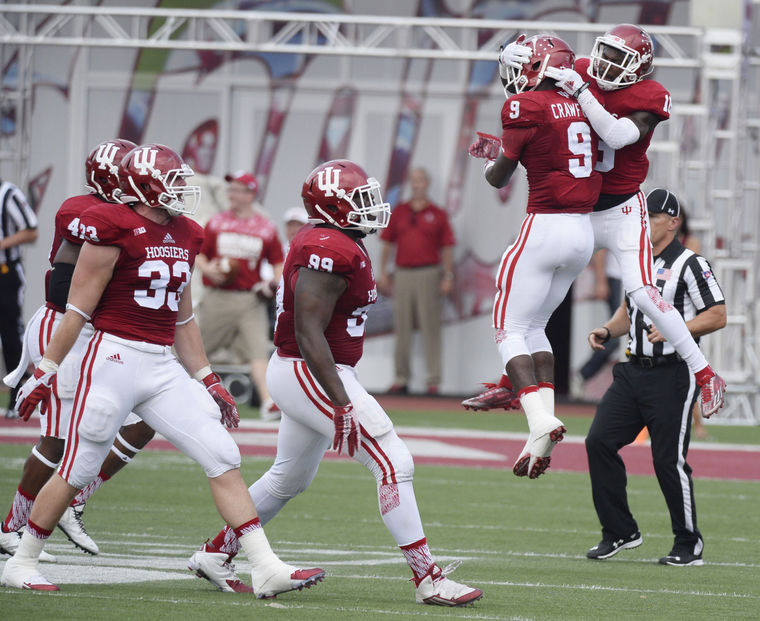 Back for another year of self-flagellation!

For those that are new to PJP, each week I’ll take a second look at the previous game and provide some observations. Like last year, a disclaimer is in order: I am not now, nor have I ever been a football coach. My playing days ended at the JV level when I realized that what limited athletic ability I had was better suited to the baseball diamond. Any knowledge of modern college football schemes and tactics I have is based on reading the many quality writers out there right now on the subject[ref] Chris Brown at Grantland, Ian Boyd at Football Study Hall and Breakdown Sports, to name a few.[/ref] and on watching a potentially unhealthy amount of football over the years. Given my background, my knowledge here is obviously far from complete. If you think I’m off base on something, by all means enlighten me.

Also like last season, you will mostly see positive descriptions of what happened, as opposed to normative descriptions of what I think should have happened, mostly because I’m not privy to what was called – I can only go on what I observe.  With a year of this under my belt and no major schematic or coaching changes, you will likely see more comparisons to what the IU offense or defense has done in the past.  Still, I will try to make it clear when I’m moving into the speculation zone.

I can’t put it off any longer. We have to talk about the defense’s performance against the Salukis.

The chart below depicts the players that I noticed on defense during my review, arranged in the base package that IU featured for all but a handful of plays:

The defensive line split playing time evenly, as did Clyde Newton and Dawson Fletcher at SLB.  I don’t think Rashard Fant came out of the game until his concussion in the 3rd quarter. Padmore had been spelling Andre Brown at LCB, but he took over for Fant after the injury. TJ Simmons at MLB sat for the equivalent of two or three series at the most.  All the other spots (SS, Bandit, WLB, FS and LCB) were around a 2-to-1 series split between the 1st and 2nd team.

The suspensions made the actual group that played on Saturday significantly different than the published depth chart, but it likely would have been different anyway. PUBLIC SERVICE ANNOUNCEMENT: depth charts under Kevin Wilson, and depth charts in general, provide little useful information. Coaches have very little (if any) incentive to make them accurate so they, shockingly, don’t worry about making them accurate. Case in point: Jonathan Crawford was listed on last week’s depth chart as the 2nd stringer at strong safety, which in Brian Knorr’s defense is the safety that aligns to the boundary (short) side of the field. On Saturday, Crawford started and played exclusively at free safety, the safety aligned to the field (wide) side, due to a previously undisclosed injury to Chase Dutra, who had been listed as the starter at free safety. It’s possible Dutra was injured between Tuesday’s publication of the depth chart and Saturday’s game, but Crawford said after the game that he’s known he was going to start at FS for a few weeks now. So let’s all go ahead and agree that we won’t worry about depth charts published by the team. That is all.

On four 3rd downs where SIU needed five or more yards and on SIU’s last drive, IU changed up its defensive personnel: Shawn Heffern moved inside to the nose, Zack Shaw moved down to DE from his normal Bandit position (like Mangieri did last season) while Mangieri manned the other DE spot. Both DE’s aligned wider than their normal position. Nile Sykes played Bandit. Marcus Oliver stayed at his normal WLB spot, while the SLB, Clyde Newton or Dawson Fletcher moved inside to the MLB spot. True freshman safety Jameel Cook, Jr. came on as the nickel back, aligned a little wider than the normal SLB position. With the exception of moving the SLB inside to play MLB, all of this is similar to what we saw last year, with Tim Bennett serving as the nickel back.

Somewhat surprisingly, given the power running, Wildcat style that SIU was using, IU never went to the double bandit package[ref] Aside from the few plays that SIU ran inside the IU 5.[/ref] that it used in 2014 in obvious running situations, where the SLB was replaced by another, larger linebacker.

It is not intended as an excuse, but to put IU’s defensive performance against SIU in the proper context, we have to consider the lack of experience on the field. We knew the 2015 IU defense would be a little on the green side, especially in the secondary. Then it was announced shortly before kickoff that four players we expected to play regularly, Darius Latham, Tegray Scales, Greg Gooch and Ralph Green,[ref] including arguably IU’s best defensive lineman (Latham) and best linebacker (Scales)[/ref] were suspended. News also leaked that Chase Dutra, IU’s most experienced returning defensive back and projected starting free safety, was out with an injury.

Because of the suspensions and Dutra’s injury, 11 of the 22 players that saw the field on defense were playing their first meaningful downs at IU: true freshmen Andre Brown, Jordan Crawford, Jacob Robinson and Jameel Cook Jr., redshirt freshmen Nile Sykes, Kyle Loechel and Dameon Willis, redshirt sophomores Paul Dougherty, Noel Padmore and Mario Swann and redshirt junior Dawson Fletcher.[ref] Paul Dougherty, Noel Padmore and Dawson Fletcher may have seen some action in 2014, but not enough to be considered experienced in any meaningful way.[/ref] So half of the players on the field on Saturday were entirely untested. Given that fact, some of the mistakes that were made, especially in the first half, are not so surprising.

Three Big Plays and a Bunch of Small Failures

IU’s defensive stats and overall defensive performance move from the “disappointing” range to “unmitigated disaster” on the back of three big plays: (1) a 68-yard TD pass from Mark Iannotti to tight end Adam Fuehne in the 2nd quarter; (2) an 80-yard screen pass from Iannotti to running back Daquan Isom early in the 4th quarter and (3) a 57-yard pass from Iannotti to Fuehne that moved SIU from deep in their own territory to the cusp of field goal range in the 4th quarter.

I couldn’t find decent video of the long TD catch and run by Fuehne so you’ll have to take my word for it. Brian Knorr confirmed in his post-practice comments today that one of the big passes to Fuehne was a blown man coverage and I’m 99% sure this was it. All 3 down lineman, the bandit, the SLB, WLB, MLB and strong safety all were either blitzing or reacting hard to the run fake. The free safety, Tony Fields, ran to cover the slot receiver, creating a clear Cover Zero (i.e. no deep safety), man-everywhere look. Maybe 3 or 4 times in 2014, DC Brian Knorr brought 7 pass rushers and played man with the 4 remaining defenders. There’s a chance that’s what was going on here. A few other times in 2014, Knorr brought 6 rushers and played man behind it. It’s also possible that was the call.[ref] More often than not, when Knorr brought six rushers, he played a Cover 3 or some other form of zone behind the blitz.[/ref] The causes of my uncertainty are the post-snap reactions of inside linebackers TJ Simmons and Marcus Oliver. I just can’t tell if they are blitzing or simply reacting to the run fake. My guess is that one of them was not supposed to blitz and instead was supposed to be locked up in man with the tight end. It’s also possible that safety Kiante Walton was not supposed to blitz and instead was responsible for the tight end. In any event, one person screwed up and SIU had exactly the right call against that sort of all-out blitz and executed the run-fake and pop pass to perfection.

Next, the screen pass:

Zack Shaw was in the right spot and looked like he was going to make the tackle for a short gain. Even though Shaw (#33) didn’t make the tackle, he still deserves partial credit for keeping contain and turning the play back inside. The pursuit by Shawn Heffern (#53) and Marcus Oliver (#44) was there in time – but both whiffed on the tackle. The play went from bad to worse because (a) Mario Swann (#25) allowed himself to be blocked entirely too easily, (b) Noel Padmore (#18) took a bad angle and seemed to assume that someone else would make the tackle, (c) one of the SIU wide receivers put a great block on Jonathan Crawford (#9).

On to the second big pass to Fuehne (apologies, the video starts about a half second late):

It looks like IU was bringing five rushers, with the bandit and MLB T.J. Simmons blitzing. It also looks like IU is playing a zone behind the blitz, and in that zone, Marcus Oliver or Clyde Newton (or both) should have picked up the tight end. Free safety Jonathan Crawford was pulled toward the field by wide receiver screen action. Strong safety Kiante Walton was in position to hold the play to around 20 or 25 yards, but his missed tackle put Fuehne in the clear.

So that’s two passes to the tight end and a screen pass for 68 yards, 57 yards and 80 yards respectively. Cut those out and we’re at a more reasonable, if not good, 454 yards allowed, about 20 yards more than IU’s 2014 average yards allowed per game, or 75 yards less than 2013’s average. It’s also 17 points off the board. If you subtract those 17 points and the TD scored on the blocked punt, the IU defense allowed 23 points via sustained drives. Again, that’s not an ideal number, but it’s not terrible.

All that being said, IU’s defensive efficiency, or its ability to end drives, also needs to improve.  In the 1st half, SIU converted 7 of 9 3rd downs.  On 7 of the 9, SIU had to gain three yards or less; 4 of the 9 only required 2 yards or less. IU’s problem wasn’t really 3rd down – it was giving up an extra yard or two per play on 1st and 2nd down.  There were many examples of an IU defender placing himself in position to make a stop for little to no gain, only to miss the tackle and give up 4-8 yards. That’s the difference between a 3rd and 2 that is very hard to stop and a 3rd and 5 or more that forces the opponent to throw.

On the positive side, IU’s front seven attacked the line of scrimmage and tackled better in the 2nd half, and the 3rd down numbers reflected that in-game improvement.  In the 2nd half, SIU faced 8 3rd downs and converted half of them.  Four of those 3rd downs required SIU to gain 9 or more, while only 4 of which required SIU to gain 3 yards or less.

Ending on a Positive Note

True freshman Jonathan Crawford’s debut wasn’t perfect, but the kid had an auspicious first series as a college football player. He saved a touchdown on the first play from scrimmage, and then blocked a field goal with a crazy vertical at the end of that drive.  Crawford clearly has tremendous physical ability and he demonstrated some good instincts at times against SIU. Hopefully we’ll see Dutra and Crawford on the field together soon.

Check back tomorrow for a more enjoyable look back at the offense’s strong performance.