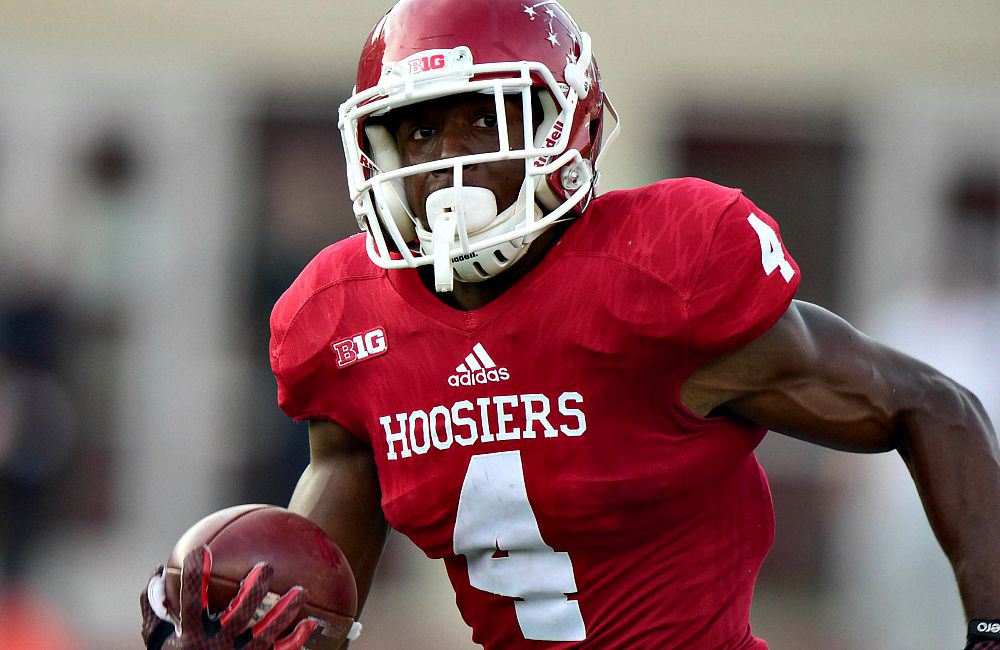 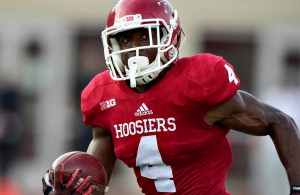 In this week’s edition of Film Study – Offense, the passing game is back and the running game keeps on chugging sans Coleman.

The chart below contains everyone who I noticed on the field for IU’s offense:

The Howard/Redding split at running back was somewhere around 60/40 or two-third to one-third, and it seemed to work very well. At wide receiver, the starting trio of Ricky Jones (generally aligned to Sudfeld’s left), Simmie Cobbs (generally to Sud’s right) and Mitchell Paige (in the slot) saw roughly two-thirds of the action. Nick Westbrook spelled Jones on the left side, Leon Thornton subbed for Cobbs on the right, and Andre Booker and Damon Graham split time with Paige at slot. At tight end, Anthony Corsaro, Michael Cooper and Danny Friend split time fairly evenly.[ref] Jordan Fuchs was out with an injury.[/ref] All five starting linemen and Sudfeld played the entire game.

From a personnel grouping and formation standpoint, pretty much everything was similar to what we saw in 2014. IU played the vast majority of the game in “11” personnel group, meaning one running back, one tight end and three wide receivers. Again, like last year, the tight end moved around among three primary positions: (1) in a traditional position, three-point stance outside one of the tackles, (2) as an H-back, a few yards behind the offensive line, or (3) in the slot to the left or right, essentially functioning as a fourth wide receiver. The tailback also lined up in one of three positions: (1) a yard or two directly to one side of Sudfeld, (2) a yard or two to the side of Sudfeld and two yards behind him or (3) three yards directly behind Sudfeld in the pistol.

One change from 2014 that I expect we will see more of in 2015 was an expanded use of formations utilizing two tight ends (aka “12” personnel). Almost every series involved one or two plays with two of Cooper, Corsaro or Friend on the field. Sometimes both were in traditional tight end positions at the end of the line, sometimes one of the two was used as an H-back.[ref] In 2014, by comparison, IU used two tight ends only a handful of times a game, at the most.[/ref] Given the blocking prowess of that crew and the power running skill-set of Howard and Redding, expect to see more of these formations as the season progresses.

Nate Sudfeld commented recently that he thinks the offense just assumed they would continue moving the ball through the air in 2014 because they had done so in 2012 and 2013. I think we were all guilty of that assumption. Even before Sudfeld’s season-ending injury, and with the exception of the Bowling Green game and maybe the Mizzou game, the passing game was never quite in sync. After Sudfeld’s injury, the passing game all but disappeared for a month or so. To backup Zander Diamont’s credit, he made some strides late in the season, but IU’s passing production was a far cry from 2012 and 2013 levels.

With that context, last Saturday’s passing performance was great to see, even if it came against an FCS opponent. Take a look at Sudfeld’s passing chart: 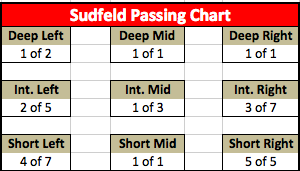 For purposes of the chart, short passes are 5 yards or less, intermediate passes are between 6 and 15 yards, deep passes travel more than 15 yards. In total, Sudfeld was 10 of 13 on short passes, 6 of 15 on intermediate throws and 3 of 4 on deep balls. IU didn’t opt to take many shots down the field, but when they did, Nate was on target, and his receivers made the play.  Injecting the deep threat back into the offense would go a long way towards making up for the loss of Tevin Coleman’s explosiveness.

While Nate’s numbers were certainly impressive, he can play better.  He narrowly avoided a pick-six in the 1st quarter when he stared down Simmie Cobbs and tried to fit a ball into a tiny window.  In the 4th quarter, he underthrew a corner route to Anthony Corsaro in the end zone that probably should have been a costly red zone INT.  I think Sud would tell you that he should complete more than 40% of his throws between 6 and 15 yards.[ref] Although one of those incompletions was a drop by Mitchell Paige.[/ref]  Overall, though, IU fans should be encouraged by the state of the passing game.

The Running Game Was Good, But…

…a few things could be cleaned up.  IU found success early with outside zone runs and pin-and-pull sweeps.  In fact, Redding and Howard each scored 1st half TDs on pin-and-pull plays.[ref] Or the close variation, the OG sweep, described in detail here by Breakdown Sports.[/ref] Jordan Howard was as advertised: a punishing, powerful back, with more than a little athleticism to go with that power and size.  Redding ran hard as well, with maybe a little more quickness than we saw last season.

In the second half, a couple issues popped up that either ended promising drives or almost did.  On a 3rd and 2 inside the SIU 40 early in the 3rd quarter, IU called a Power O to the right with Devine Redding at tailback.[ref] I couldn’t find video of this, so stick with me.[/ref]  Redshirt freshman left guard Wes Martin pulled to the right, which naturally created a gap in the line to the left of the center.  In a Power O, the playside linemen and the center, in this instance, Dimitric Camiel, Dan Feeney and Jake Reed, all block down (to the left) and the backside pulls around and blocks the first defender he encounters, usually just outside of the playside tackle.  Because a gap is created in the line that the rest of the line tries to close by blocking down, the Power O is vulnerable to a blitzing linebacker that shoots the gap, and that’s just what happened here.  The inside backer shot between the center and the right guard and blew up Redding for a loss.  SIU had the perfect call and executed well. That being said, IU may have been able to save the play if one of Feeney or Reed had come off their down blocks and slowed down the blitzing linebacker. Luckily for IU, Sudfeld converted on 4th and 3 when he kept it on a zone read.

In the 4th quarter, IU faced a 3rd and 4 inside SIU territory.  IU ran an outside zone with Redding.  Or I should say, everyone except for RT Dimitric Camiel ran an outside zone. For some reason, Camiel pass blocked. This created two problems: not only was he not blocking the edge, as needed for a successful outside zone, he actively impeded Redding as he backpedaled into Redding’s path.  Redding had no virtually no chance and took a big loss.  IU was forced to punt.

Without Coleman as a home run hitter in the running game, IU needs efficiency, which requires consistent execution.  For the most part, IU got that on Saturday.  But misplays like those described above, especially in critical spots, need to be avoided.  The offensive line will face a much stiffer test on Saturday against an FIU defensive line that utterly dominated UCF last week.

One last thing about the running game: I’d rather not rely on Sudfeld for 40+ yards per game on the ground.  It’s an effective change of pace, and the guy is a better athlete than most think, but I can’t handle him getting tackled and landing on his shoulder, as he did at least once on Saturday. He’s just too valuable.