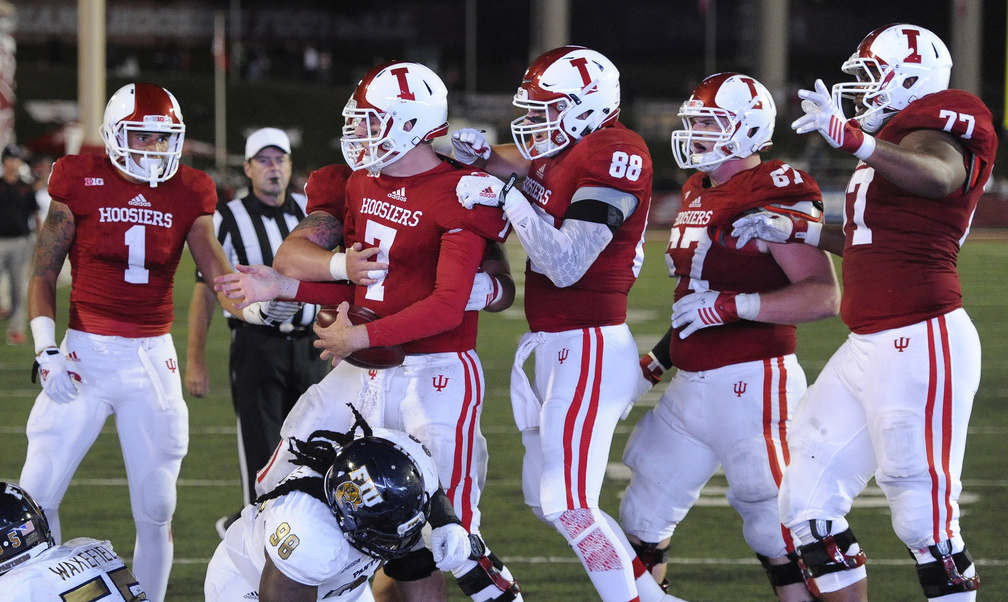 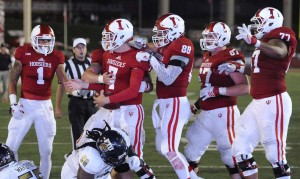 The offense ran into a better defense in Week 2. In this edition of Film Study, we’ll examine what Nate & Co. did well and what they can improve upon going forward.

The only personnel change between Weeks 1 and 2 was the addition of Isaac Griffith to the wide receiver corps, bringing the total number of wide receivers used against FIU to 8.  IU stuck with three tight ends, as Jordan Fuchs apparently isn’t all the way back from an injury suffered in fall camp.

From a personnel grouping standpoint, IU started its first drive in 12 personnel[ref] 1 running back, two tight ends, two wide receivers.[/ref], which isn’t particularly notable.  It became notable when they stayed with that personnel group for the first five plays of the drive, longer than I can remember them staying in 12 since the start of 2014.  IU employed 12 personnel for at least a few plays on almost every series.  For a few plays on their first drive, IU also deployed its 2 tight ends a little differently: both Corsaro and Cooper were lined up on the line of scrimmage, but at a distance that would generally be where IU’s slot receiver would line up.  We frequently see IU line a tight end up like this in 11 personnel, essentially functioning as a 4th WR, but I hadn’t noticed IU do this with two tight ends before last Saturday.

Take a look at Sudfeld’s passing chart for the FIU game: 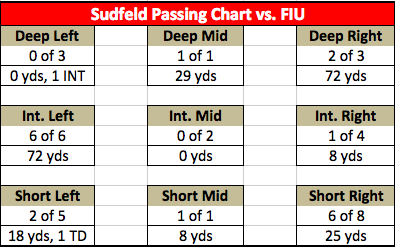 The chart and my eyes agree that while this wasn’t necessarily a bad game for Nate, it wasn’t a good game either.  On IU’s first drive, Sudfeld tried a little too hard to make a play on 4th down and ended up giving up 21 yards of field position via a sack and fumble.  Throwing the ball into coverage, particularly if the receiver is well down the field, would have been the better play. Sud obviously knows this, and he showed it in a similar situation in the 3rd quarter.  Faced with a 3rd and 8, on the FIU 44, Sudfeld threw a deep ball down the sideline to a covered Nick Westbrook and the pass was intercepted at the FIU 10.  The play functioned like a punt, just a down early.  Obviously, picking up the 1st down is preferred, but throwing a PuntPick isn’t always the worst outcome.

On the positive side, Sudfeld completed three passes that went for more than 25 yards, including two to tight end Michael Cooper.[ref] The third went to Simmie Cobbs.[/ref]  The expanded role of the tight end (whoever it happens to be on a given play) reintroduces a dimension that Wilson’s offense had with Ted Bolser in 2012 and 2013, but was missing last year. Hopefully the trend will continue.

Sudfeld also did a good job of taking advantage of FIU’s reluctance to let Ricky Jones beat them deep.  FIU’s corners gave Jones 5-10 yards of cushion for most of the game, and even when they showed tighter coverage, they retreated hard at the snap and remained vulnerable to the hitch.  Jones and Sudfeld took what the defense gave them and completed 4 hitches and 1 out route for 56 yards.  After Jones’ performance against SIU, those routes should be available against most defenses, and Sudfeld has more than enough arm strength and accuracy to consistently complete them.

Constraint Plays for the Inside Zone

One of IU’s base running plays – and probably the single play IU runs the most – is the Inside Zone.  On an inside zone, each lineman steps play side (usually more of a diagonal step, part upfield, part playside), uncovered lineman (those without a defensive lineman opposite them) help covered lineman and then get to the second level. The running back starts on the backside of the play, comes across the quarterback at an angle towards the gap between the playside guard and tackle. One of IU’s offensive goals in any game is to establish that play. Turns out, IU’s opponents know this.  Some try (and some succeed) to stop it using their base defense (i.e. without committing extra defenders). Of course, the other option is to commit extra resources to shutting the inside zone down, which can take the form of extra defenders in the box or existing defenders ignoring responsibilities (gaps) to attack the running back.  In response, IU needs “constraint plays” designed to make the defense think twice about selling out on the inside zone. Three particular constraint plays were successful against FIU.

In IU’s offense, the bubble screen is a constraint option that exists on all or the vast majority of IU’s inside zone runs.  If Sudfeld notices an outside linebacker or defensive back sneaking in on what would be the backside of a called inside zone, he can opt at the snap to fire a bubble screen to the slot receiver on the backside of the inside zone, where he should have a numbers advantage created by the cheating defensive player.  Watch the receivers on any given inside zone where Sud actually hands the ball off – chances are the slot receiver to the backside will be running a bubble route.  Usually, everyone on the offensive line and back have no idea Sud is going to throw the screen, and they proceed as if an inside zone is happening. Mitchell Paige’s 4th quarter TD is a perfect example. In the clip below, you’ll see that the FIU nickel back who might otherwise be responsible for Paige has shifted inside just a little, and is lined up on the boundary hash. Sudfeld sees this and immediately fires the ball to Paige, while Howard, the offensive line and H-back Danny Friend unwittingly carry out a fake inside zone.

The bubble screen also requires sound blocking from the outside receiver, and Ricky Jones provided that here, taking his man completely out of the play. And sure, it helps if the slot man has a little wiggle, like My Man Mitch.

Some offenses give the QB the option to read the backside defensive end on every inside zone run. Because IU (wisely) limits Sudfeld’s running opportunities, many times Sudfeld isn’t actually reading anything post-snap.  However, sometimes the Kevins (Johns and Wilson) give Nate a read, and it becomes a constraint play against a crashing defensive end (or sometimes a different defender, as we’ll see) that runs down the inside zone from behind.  It worked well against SIU in Week 1, and it worked again against FIU:

Sudfeld was actually reading a safety there, but the effect is the same.

An end-around is another valuable constraint play for the inside zone. An end-around takes advantage of a crashing defensive end and backside second-level defenders who are over-pursuing to the playside.  Offensive Coordinator Kevin Johns pulled out the end-around at just the right time against FIU, and his offense executed it to perfection. Watch how IU even incorporated its normal H-Back action on an inside zone (cutting from playside to take out the backside defensive end, usually creating a cutback lane), and flowed that into a lead blocker on the end around, in the person of Danny Friend (#84). Also, note backside tackle Dimitric Camiel (#77) left the defensive end unblocked – and the DE bit just enough on the inside zone action – to sealed off the backside linebacker.

Another of IU’s base running plays is the outside zone.  Along with a few other outside run plays (pin-and-pull, OG sweep, quick toss, speed option), the outside zone was perhaps IU’s most effective play while Tevin Coleman was at running back.  The idea with the outside zone is not for the back to get all the way outside the defense; rather, the play’s goal is to spread the defense out so the back can find a cutback lane and hit it. Tevin Coleman’s vision and acceleration make him perfect for this play. He almost always found a cutback lane, and he always hit it at full speed.

Against FIU, I counted 12 outside runs, 7 of which were outside zone, for a total of 68 yards. That doesn’t sound too bad, right? 5.7 yards per carry? Sure, but take out one Jordan Howard run that covered 32 yards, and IU averaged a pedestrian 3.3 YPC on 11 carries.

So what was the issue? First, you have to give FIU some credit – they did a good job of setting the edge and flowing to the ball with speed. But that doesn’t mean outside run can’t be successful. Where IU – and particularly Devine Redding – got into trouble was when they tried to outrun the FIU defenders to the sideline, rather than letting the line push defenders out to create a lane. For example:

It’s hard to completely blame Redding here because I’m not sure Camiel blocked the right guy, but a quick cutback might have allowed Devine to get back to the line of scrimmage, rather than losing 6.

A similar issue on a quick toss to Jordan Howard:

While I’m not sure a quick toss to the field (wide) side against a fast defense plays to Jordan Howard’s strengths and I don’t think tight end Anthony Corsaro’s block was anything to write home about, it still looks like there was a cutback lane there that might have limited the damage or even gained a few yards.

What about that 32-yard run by Howard that I mentioned earlier? When you watch the play, you’ll probably think it wasn’t an outside run at all because Howard cut it back so early. Based on Howard’s initial path and the lateral movement of the offensive line, however, this was an outside zone to the left. Take a look:

Backside guard Dan Feeney and backside tackle Dimitric Camiel created the cutback lane with two outstanding blocks. Howard showed Coleman-esque vision, made a decisive cut, broke a tackle and got into space.[ref] Yes, Tevin would have taken that to the barn, but we shouldn’t pick nits. We’re lucky to have Howard.[/ref] If IU’s backs focus on looking for an early cutback, like Howard did here, they’ll not only decrease the chances of a big loss, they’ll improve their chances of breaking a big one against an over-pursuing defense.

Now go back and watch that last play again and enjoy Michael Cooper (#85) laying out not one but two FIU dudes. Football is the best.