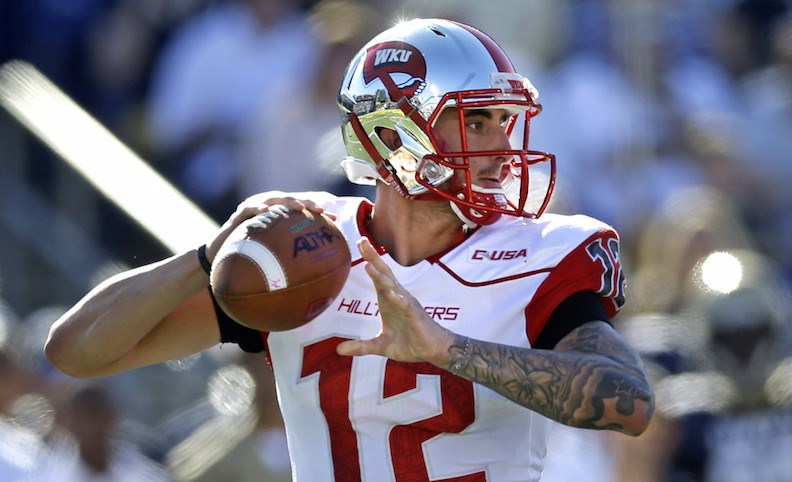 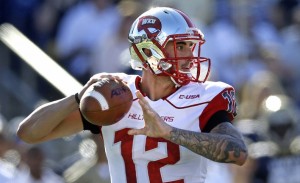 After a 2-0 start, Indiana faces a talented mid-major in Western Kentucky.

The Hilltoppers ranked 2nd in the NCAA in passing offense last year.

As a result, this week’s WGOH mismatch of the week is WKU QB Brandon Doughty versus the young Indiana secondary.

Doughty has created quite an impressive resume in his time as the Western Kentucky quarterback.  In 2013, his first full season as the starter, he passed for over 2,800 yards with 14 touchdowns and 14 interceptions.  Under Bobby Petrino, he completed 65% of his passes that season.

After Petrino bolted for Louisville, Doughty broke out last year completing 68% of his passes for 4,800 yards and 49(!) touchdowns and just 10 interceptions.

In his last 7 games dating back to last season, he has thrown just 2 interceptions in 254 attempts.  During this same time period, he has 2,475 passing yards.

The Indiana pass defense, on the other hand, has been considered below average for quite some time .  Following a season in which IU ranked 94th in passing yards allowed at 251 per game, the Hoosiers rank 121st through 2 games this year.[ref]These numbers can be influenced by both opponents and an offense’s pace of play.  For example, Indiana was 74th in pass defense S&P+ last season which is better than their NCAA rank, but still not great.[/ref]

As noted in the Defensive Film Study, Indiana’s secondary plays a lot of freshmen who makes freshmen plays.  Certainly some have been positive: Andre Brown’s pressure on the SIU 2 point conversion attempt, Jameel Cook’s interception return, Jordan Crawford making tackles all over the field.[ref]Crawford is tied for 3rd on the team in tackles at 14[/ref]  However, these young players are understandably prone to making mistakes.

Against an experienced, proven quarterback like Doughty, look for the WKU signal caller to exploit the Indiana defense through the air, especially after the season-ending loss of leading rusher Leon Allen.

If Indiana has a chance at winning, the defense needs to make a few key plays.[ref]Like the ones they made against FIU.  I don’t expect a touchdown each week, but a couple of turnovers would be nice.[/ref]  Additionally, the offense must finish drives with touchdowns, not just field goals, because Doughty and the WKU offense will get their fair share of points.  Let’s just hope Fred Glass has enough fireworks in stock in case the Hoosiers keep pace.