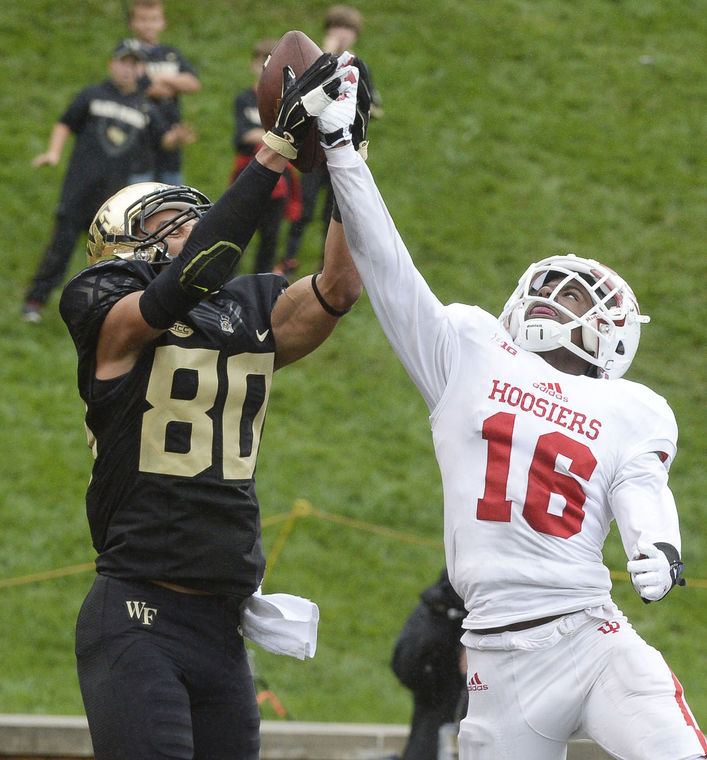 I was going to write some stuff about the defense progressing, applying pressure without blitzing . . . and then the Darius Latham news broke. Now we’ll spend our Film Study pondering how defensive coordinator Brian Knorr is going to replace the most irreplaceable player on the IU defense.

A few words on the substitution patterns against Wake:

On passing downs, IU returned to what we saw in the FIU game – Cook at nickel back, Scales and Zeke Walker (instead of Clyde Newton) at ILB, Latham at NT, with McCray and Mangieri at DE, and Shaw at Bandit.

Urban Meyer caused a minor stir among #IUFB Twitter on Monday when he said that IU started out in the 3-4 against SIU, but has showed 4-3 over the past three games. I can’t get inside Coach Meyer’s head[ref] If I could, I’d figure out why he really left Florida.[/ref], but I suspect what he is talking about is a change to the alignment of IU’s defensive line.

When Darius Latham and Ralph Green returned from suspension in Week 2 against FIU, the Hoosier D-line utilized an alignment that looks a little more like a traditional 4-3: Green aligned in a “1 technique,” in the gap between the center and field-side guard.  Latham lined up head-up on the boundary-side guard – a 2-technique.  Nick Mangieri, at defensive end, usually lined up just outside the field-side tackle, a 5-technique, or occasionally head-on on the tackle, a 4-technique. The bandit, Zach Shaw, lined up head on the tight end to the boundary-side, or outside the tackle. To compare, against SIU and almost all of last year (except for passing downs), IU used a true nose tackle over the center and defensive ends that both lined up as 3-techniques between the guard and the tackle – a traditional one-gap 3-4 alignment.

Well, things have changed. Namely, Darius Latham has been suspended indefinitely. Can’t sugarcoat it, this one stings.  6’5, 300-lb dudes that can stuff the run and rush the passer – both of which Latham demonstrated last Saturday against Wake – are extremely difficult to find, especially for programs like Indiana. We’ll see if he returns to the team this season, but I’m not holding my breath.  In the meantime, it’ll be interesting to see what Brian Knorr does against Ohio State.  One option is to stick with the faux-4-3 by moving Ralph Green (or maybe Shawn Heffern) to the spot previously manned by Latham and pairing him with Nate Hoff or Adarius Rayner at the 1-technique.  You lose some pass rushing prowess there, but hopefully not too much against the run. The other option is to go back to the traditional 3-4.  As you may recall, Green occasionally lined up as a defensive end last year in that alignment, and we might see that again.

But yes, we should all anticipate that Latham’s absence will have some negative consequences against the run[ref] Remember that SIU game without Latham and Green? I suspect Ohio State might be a little better than the Salukis…[/ref] and the pass.  Hey, at least only one player is suspended![ref] …braces himself for the next press release from the Athletic Department…[/ref]

Still Some Secondary Issues, But Tony Fields Made a Play

Against Wake, the secondary benefitted from an inaccurate, young QB and a disruptive pass rush, but they also made some plays, perhaps none more surprising than the pick-six turned in by sophomore safety Tony Fields. We’ll get to that. First, the bad.  With a 14-point lead and less than three minutes to play, IU rushed only three on a 3rd and 8 from the IU 29.  It looks like IU was in a 3-deep, 5-under, “Cover 3” zone, with field safety Jonathan Crawford taking the defensive-left deep third, and boundary safety Chase Dutra taking the middle third.  Here’s what happened:

Based on a replay shown on the broadcast, it didn’t look like Dutra was threatened to his right so he probably should have moved a little quicker to pick up the receiver that ultimately caught the TD, who came from the right slot. Likewise, Crawford may have moved a bit too quickly to the outside, where there wasn’t a direct threat. Either way, you’d expect these guys to clean these things up the more they play together.

Now, back to Tony Fields.  In 2014, while Fields saw frequent playing time as a true freshman in relief of Antonio Allen, he didn’t make what you might classify as impact plays.  In fact, he happened to be on the field for a disproportionate amount of big plays by IU’s opponents.[ref] A big run against Mizzou and a pass against Maryland spring to mind.[/ref]  With last year’s starters at safety gone, many thought Fields had a good chance to start coming into 2015.  So far, however, true freshmen Jameel Cook and Jonathan Crawford appear to have passed him by.  Then this happened:

Fields was in the right spot, and he made an aggressive play on the ball. While this one play probably won’t push Fields into a starting role, it was good to see him make a play when given the opportunity. Hopefully he’ll build on it.

And we don’t need to talk about the defensive lineman whose pressure helped make the pick possible. It’s too soon.