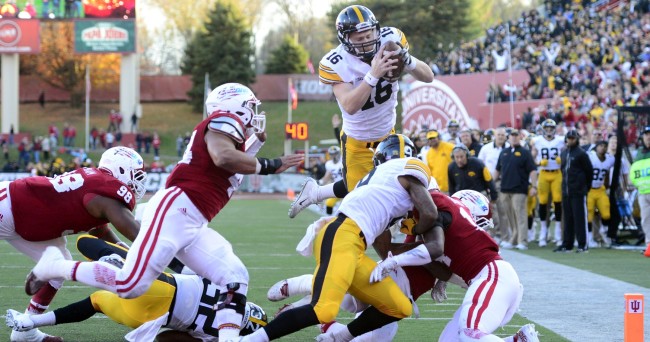 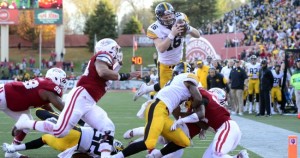 But an unproductive passing game, a positive for much of the year with Sudfeld, proved to be just as problematic for the Hoosiers.

It may have been unrealistic to expect Indiana to pull off the upset.  But it was a game IU was fully capable of winning.  However, they were once again unable to capitalize.

Indiana’s longest play was a 37 yard Jordan Howard touchdown run. The next longest was his 29 yard touchdown run.  Overall, there have been much more explosive games during the Kevin Wilson era.  Just 3 passing plays went for 20+ yards, although the Hoosiers did have 7 rushes of 10+ yards.

Iowa got things going on their first drive with a 65 yard touchdown run by Akrum Wadley.  The Hawkeyes had 4 passes of 20+ and 6 rushes of 10+.  Other than the first Iowa touchdown, neither team had an explosiveness advantage.  If anything, Indiana did more of their big plays on the ground and Iowa had a few extra through the air.

Unsurprisingly the biggest difference here was in the passing game.  C.J. Beathard completed 61% of his passes while Nate Sudfeld was at just 43%.[ref]In general, completion rates and success rates should be pretty similar.  An incompletion is always unsuccessful while most completions are successful.  The only time that isn’t true is if you have a QB throwing a lot of passing at or near the line of scrimmage.  In that case, even a completion could reflect an unsuccessful play if it goes for little or no yards.[/ref]  Beathard had 3 more completions than Sudfeld on 6 fewer pass attempts.  For Indiana, it was a combination of bad passes by Sudfeld and drops by receivers and tight ends on good passes.  Simmie Cobbs had a 25% catch rate. Mitchell Paige was at 40%.  Anthony Corsaro was at 20%.  All were well below their season averages of 59%, 72%, and 50%, respectively.

Both ground games performed pretty similarly.  Interestingly, Indiana’s defense performed well against the run on first down holding Iowa to a 37% success rate.  But the D couldn’t make enough plays to get off the field as the Hawkeyes improved to a combined 59% success rate on 2nd and 3rd downs.  On the IU side, Jordan Howard was successful on 64% of his runs compared to 33% for Redding and 0% for Majette.

Finally, 3rd downs reared their ugly head again.  Iowa was 7 for 14 on conversions, but the really deflating ones were the 3rd and 9 in the 2nd quarter and the 3rd and 11 and 3rd and 10 in the 4th.  Iowa would go on to score a touchdown on each of those 3 drives.  Think about how different the game would be if Indiana could have found a way to make 1 or 2 of those stops.  The 2nd quarter one would have resulted in a field goal instead of a touchdown, but the latter 2 would have forced a punt.  It’s great that the defense gets to 3rd and long, but at some point they need to finish.  A microcosm of the Indiana team as a whole, I suppose.

No advantage here for either team.  The interception by Desmond King didn’t result in great field position for Iowa.  Indiana had the only punt return for either team, and it was only for 5 yards.  Neither team did any damage on kickoff returns.

At some point, if Indiana is going to win, the Hoosiers need to take full advantage of the scoring opportunities when they become available.  The defense isn’t at a point to where the offense will have a huge scoring opportunity advantage.  As a result, IU must make the most of what is available.  In this one, it was the 2 field goals.  Both were probably the correct call to kick it, but sometimes that isn’t enough.  The first field goal came after a failed 3rd and 4 from the Iowa 15.  Coming off the initial Iowa TD, it was important to follow their drive with points.

The 2nd came with Indiana having a 1st and 10 from the Iowa 12.  An incomplete pass to Jones, 2 yard Majette run, and another incompletion to Cobbs, and Indiana opted for a field goal, rather than go for it on 4th and 8.  The Hoosiers ran 16 plays on the drive, only to settle for a field goal.  Yes, it brought IU to within 1 point, but against a tough Iowa team you hate to just get 3.  Especially after moving it 80 yards on the drive.

Desmond King added his FBS leading 8th interception on the day when he picked off a Nate Sudfeld pass intended for Mitchell Paige.  It wasn’t too costly in terms of field position, but for Indiana it started to put the dagger in.  If Sudfeld doesn’t toss an interception and Indiana ended up with a touchdown on the drive, then the game could have been a lot more interesting at the end.  As it turned out, the defense forced a 3-and-out and the offense scored a touchdown on their next drive.  But with the failed onside recovery, it proved to be too little, too late.

Having said that, Indiana really needed the defense to come up with 1 or 2 turnovers in this one.  Turnovers helped fuel wins against Florida International, Western Kentucky, and Wake Forest.  In a game that Indiana was the underdog, some big plays by the defense were necessary.  They didn’t come and on a day that the offense really had difficulty, Indiana was unable to pull off the upset.