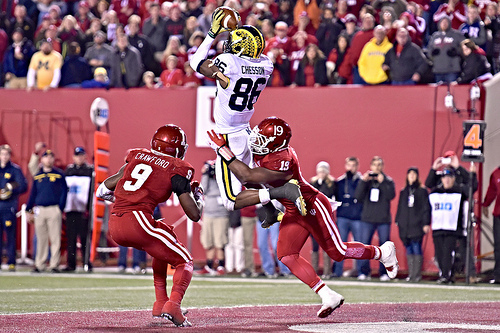 Sure, we thought the secondary would be bad this season. NO ONE TOLD ME IT WOULD BE THIS BAD.

There’s really not much else to talk about.  We might as well look at each one.

Like Iowa, Michigan started by going after the IU corner not named Rashard Fant. In this case that was Tyler Green. After a short wide receiver screen, Rudock’s second pass of the day was a simple hitch to Jehu Chesson that went for 12 yards because Green was giving a healthy cushion. One play later, Green lined up with a 6-yard cushion on Chesson, presumably to keep the Wolverine wide receiver in front of him. About that…

Nothing the pass rush could do about this TD. Rudock took a 5-step drop, looked to his first read (Chesson) and got the ball out in rhythm. Chesson simply ran past Green, who never even touched Chesson on the way by. Rudock’s pass was right on the money, but this was not a strong example of man coverage by Green. I’ll also note that it’s not entirely clear to me what Tony Fields – the safety to Green’s side – is doing on this play. If he’s in zone, he’s awfully close to linebacker Tegray Scales. Had he backpedaled and obtained a little depth, he might have discouraged Rudock from throwing to Chesson or been in position to make a play had Rudock thrown it anyway.

Early in the 2nd quarter, Rudock & Co. faced a 2nd and 9 at the IU 15. UM WRs Chesson and Darboh were aligned to the field, with Chesson in the slot. Right before the snap, field safety Jonathan Crawford dropped down and lined up opposite Chesson, about 5 yards off the ball. At the snap, Darboh ran a post and Fant followed him, in what appears to be man coverage.  Boundary safety Chase Dutra moved to his left towards the middle of the field. Crawford redirected Chesson and then turned him loose about 10 yards downfield:

I see at least two possibilities here. If the call was Cover 3, then Fant would be responsible for the defensive deep left third, the zone where Chesson caught the TD. In that scenario, Fant should have turned Darboh over to Dutra and picked up Chesson, while Crawford would have been responsible for one of the short zones, making his decision to pass Chesson off the right one.

The other option is that Fant and Crawford were both supposed to be in man, and Crawford should have stayed with Chesson.  I don’t see that as particularly likely though, because Crawford’s action

screams zone.  I can’t imagine a scenario in which Fant was supposed to stay on Darboh and Crawford was supposed to be in zone because that would mean Chase Dutra, initially aligned to the boundary, would be responsible for covering the deep corner on the field side. So yeah, one of Crawford or Fant screwed this up, but I can’t tell you for sure which one.

Things were more clear (and certainly more comical) on Chesson’s 3rd TD. This time, Green only gave Chesson a 2-yard cushion. Green and Fant were in man on the two Michigan wideouts.  Dutra appeared to have man responsibility for Jake Butt, but Butt stayed in to block so Dutra backpedaled into an intermediate zone.  Crawford’s role isn’t entirely clear, but my guess is he was responsible for the deep middle.  Rudock completed a play fake and once again threw a strike to Chesson on a 15-yard dig (deep in).

Green’s coverage wasn’t great, but he was in position to bring Chesson down after the catch, had he not collided with Crawford. Crawford certainly should have been in a position to immediately tackle Chesson if not break up the pass, had he not overrun the play, taking himself directly into Green’s path. I’m guessing that’s not how Brian Knorr drew it up.

Believe it or not, after that Chesson TD midway through the 2nd quarter, IU managed to keep Michigan out of the end zone until the final seconds of regulation. On 4th and Goal from the IU 5, Michigan set Darboh and Chesson to the boundary, with Chesson in the slot. Fant was in press coverage on Darboh to the outside, while safety Tony Fields was on Chesson, about 4 yards off the ball.  IU brought 5 on the blitz, leaving 6 IU defenders to cover 5 Wolverines in the pattern. It appears that everyone was in man, with Crawford in zone in the middle. Rudock was almost immediately under pressure, but he managed to loft a ball to Chesson:

There’s not much Fields or Crawford could have done, aside from separating Chesson from the ball once he had his hands on it. Crawford could have sold out to Chesson’s side, but he was understandably worried about helping Chase Dutra on Jake Butt. To my eye, this is the touchdown that involves the smallest level of IU defensive screwup. This was just a good throw and catch by Rudock and Chesson, in a large-to-quite-large spot.

It looks like Fields was in man coverage on Butt, and he got absolutely torched when Butt faked an out and cut back to the post. Crawford again appeared to be a deep middle zone. He probably dropped a little too far, considering the play began at the IU 21. Had he stayed a little closer, he might have been able to reach Butt in time to bring him down short of the end zone. As it was, Butt had time to bring the ball down and gain steam before Crawford even approached him.

We’ve talked a few times this year about the emergence of Rashard Fant as a solid cover corner. It’s been a good year for Fant. That said, this was not his best game. He was burned multiple times, none worse than on Michigan’s final TD:

Fant gave Darboh a 5-yard cushion, had his eyes in the backfield, and was victimized by Rudock’s pump-fake.

How about one last non-TD-but-probably-should-have-been-a-TD bonus clip? Well, here you go:

On a day when Jake Rudock was almost perfect, he made a mistake here. Maybe it was Zack Shaw bearing down on him, maybe it was the pressure of needing to make a play down by a TD late in the 4th, but whatever it was, Rudock floated this pass. And, as the end zone view clearly shows, Crawford was in position to make a play. For some reason, though, he lost track of the ball and ended up in a back pedal when he finally turned to locate the ball. Instead of a PBU or an INT, Chesson made the catch and set up the game-tying TD.  Poor technique from Crawford cost the Hoosiers dearly on that play.

A few weeks ago, I put some of the blame for IU’s pass defense problems on the lack of pass rush. I don’t think I can do it this time. The pass rush wasn’t great, but IU actually generated more pressure with its front 4 against Michigan than it has since the Penn State game. While the Hoosiers only came up with 1 sack, they hit or hurried Rudock 8 times and they batted down 2 passes. Most of the damage came on plays where there was little to no chance that a defensive lineman or blitzer could have impacted Rudock’s release.

After looking at all 6 Rudock touchdown passes, there’s no one thing that can be addressed. The secondary struggled in man, and they struggled in zone. The corners were bad, and the safeties were bad.  The schemes may have been sound, but the execution and technique were utterly lacking. Even if the offense continues to click and the front seven maintains its stout play against the run, this team will not win it’s last two games and qualify for a bowl game unless the secondary plays significantly better than it has for the last month.

As you may have surmised, Saturday was a day to forget to for Jonathan Crawford. Except for one play:

Crawford played a short zone perfectly here, undercutting a route by the tight end, reading Rudock’s eyes and elevating to make the pick. The kid is still very young and his athletic ability is undeniable. The future is bright for Crawford, but this particular Hoosier defense could use a few more big plays – and a few less big mistakes – from him down the stretch.