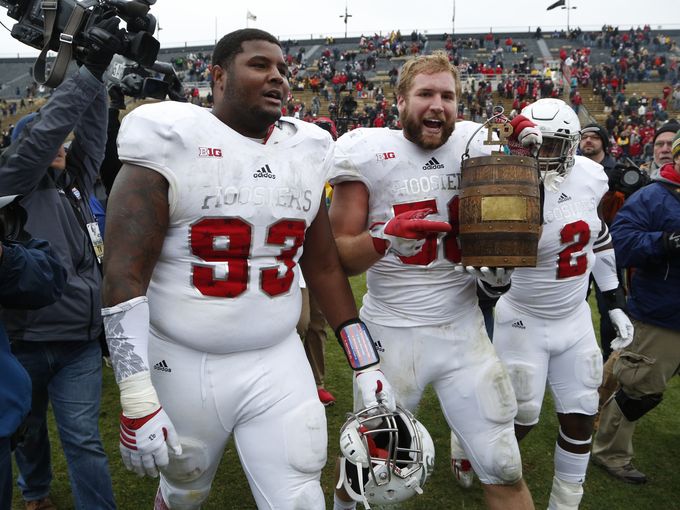 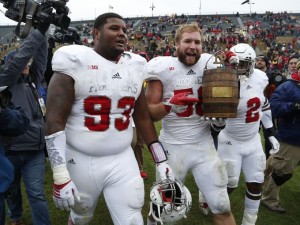 Giving up 36 points to an inept offense didn’t even seem that terrible! It’s all relative in this week’s Defensive Film Study.

Pass Defense[ref] Another week in which neither team put out video from the game so I don’t have any clips for you.[/ref]

Purdue attacked IU with its slot receivers in two ways: (1) with outbreaking routes to the field, taking advantage of the SLB when the corner went deep with the outside receiver or (2) with hitch routes between the SLB and the MLB to the field or the WLB and the corner to the boundary. They also attacked the soft middle between the two ILBs.  Boiler QB Austin Appleby’s passing chart[ref] Excluding garbage time.[/ref] bears this out: 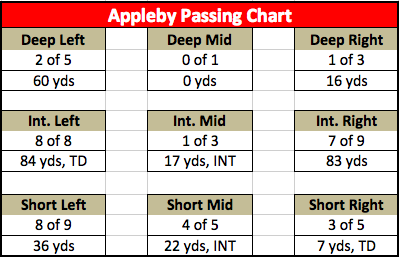 For its part, the IU defense seemed content to sit back in zone and keep the Boilers in front of them. IU rarely blitzed and for once, really didn’t need to in order to generate pressure. I counted only seven instances of 5-man pressure and three 6-man pressures. That’s 10 blitzes in 57 called pass plays (17.5%). Of IU’s five non-garbage time sacks, four came on 4-man pressures and one resulted from a 6-man blitz. In addition to the sacks, I counted nine other hits/hurries, all but one of which came on 4-man rushes (with the other coming on a 5-man blitz).

While IU’s zone, particularly as played by its linebackers, needs to be tightened up significantly, Purdue really didn’t kill IU through the air. If we factor in IU’s five non-garbage time sacks (which cost Purdue 23 yards), Appleby’s two throw-aways and two passes that were batted down, Purdue gained 302 yards on 57 called passing plays (5.3 yards-per-play). That’s pretty reasonable.

The vast majority of Purdue’s rushing yards came on zone-reads, both on plays where Appleby handed off to RBs Markell Jones or D.J. Knox and when he kept it himself.  On the five plays where he kept on a zone read, Appleby picked up 36 yards.  Jones and Knox’s rushing chart looks like this:

That’s 21 carries for 128 yards (6.1 YPC). Not great. Per usual, a handful of big runs were the problem, two of which came on zone-read busts. On one 27-yard zone handoff to Jones, Robert McCray failed to close a backside gap and WLB Tegray Scales – shifted to the boundary hash on the play due to Purdue’s twins alignment to that side – was slow to react to the run . On a 20-yard zone run for a TD by Jones, MLB TJ Simmons over-pursued to the playside, while backside SLB Dawson Fletcher and FS Jonathan Crawford were slow to react to take away the cutback.  Purdue’s other big run was sweep by DJ Knox that happened to be away from a blitz by both IU inside linebackers. Take those three runs out and Purdue’s other 18 attempts by RBs went for only 50 yards (2.8 YPC).

We’ll have plenty more during the offseason on the 2015 IU defense and how it might be improved heading into 2016. For now, let’s just hope those projections that have IU taking on Oregon in the Foster Farms Bowl are wrong…