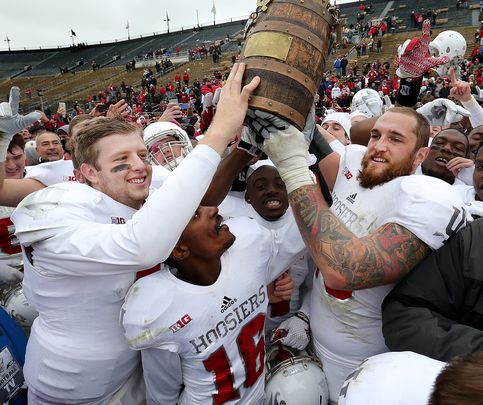 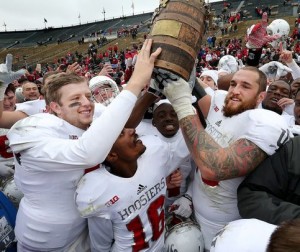 In this week’s O Film Study, we celebrate the brilliance of two all-time IU greats: Dan Feeney and Nate Sudfeld. (And no, I don’t think that’s hyperbole.)

Gap Running and The Dude

Kevin Wilson’s run offense at IU is often described as a zone blocking scheme. While there’s certainly some truth to that description, IU’s rush offense also relies heavily on gap run schemes involving pulling linemen, like the Power O, Counter, OG Sweep, and Pin-and-Pull. The chart below shows the various run plays used by the Hoosiers against Purdue and the results for those plays: 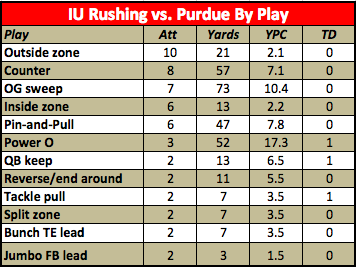 Grouping the plays into zone vs. gap concepts, the results, at least against Purdue, are somewhat striking:

I haven’t kept track of these numbers all year, but my suspicion is that the season-long numbers would probably be a little better for gap plays as well. The primary reason for IU’s gap rushing success: one Daniel James Feeney.  The All-B1G performer is one of the best pulling guards you’re ever going to see at the college level. He’s quick, agile, and powerful. To the offensive coaching staff’s credit, they aren’t afraid to use Feeney’s immense talents.  Against the Boilers, Feeney was a puller on all three Power Os, all but one or two of the eight Counters, and all seven OG sweeps. That’s at least 15 run plays with Feeney out front.  I wish I could show you all of them because they really are things of beauty, but you’ll have to settle for just this one, an OG sweep:

You can also see Feeney pulling on a Counter here (and you can marvel at that Devine Hurdle). None of this is to say that Kevin’s favorite Dude is doing it by himself. IU’s run game works because the offensive line, tight ends, receivers and backs all do their jobs. My point is simply that Feeney’s special talent allows the IU offense to use blocking schemes normally reserved for programs with 4 and 5-star road-graders on the offensive line.

Thanks to a season-ending injury in his true sophomore season, Feeney is currently a redshirt junior. The NFL is certainly an option for Dan, just as it is for Jordan Howard.  While Howard’s decision will undoubtedly garner more attention, for my money, Feeney’s decision will have a greater impact on IU’s rushing attack in 2016.

With IU needing back-to-back road wins to secure bowl eligibility, without the services of  its 1st Team All-B1G running back, it was on Nate Sudfeld to keep the offense clicking. 735 yards and 10 total touchdowns later[ref] 8 passing, 2 rushing.[/ref], mission accomplished.  Against Purdue, as he did against Maryland, Sudfeld attacked down the field: 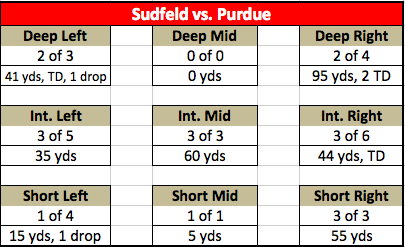 I generally don’t quote Trent Dilfer, but THAT WAS A DIME.[ref] He also placed a 50-yard bomb right in Simmie Cobbs’ hands only to have it dropped.[/ref] Sud was decisive and accurate throughout, finding holes in the Purdue zone in the middle of the field with Mitchell Paige and in the red zone with Cobbs:

That bomb to Booker made Sudfeld IU’s all-time leader in passing yards. Sure, he plays in a QB-friendly system, and he’s had some decent talent around him, but he also amassed the record-setting total of 7,490 yards without starting for a full season until his senior year.[ref] And even this year, he missed a game and a half with an ankle injury.[/ref] He threw fewer passes than Antwaan Randle El, Ben Chappell, Steve Bradley or Kellen Lewis. Simply put, the guy’s been a great Hoosier. I hope he gets a chance at the next level.[ref] Seriously, is there any reason he can’t be Brock Osweiler 2.0?[/ref]

That’s it for Film Studies for the (regular) season. Check back for more analysis of the regular season and coverage of IU’s trip to the Pinstripe Bowl on December 26.