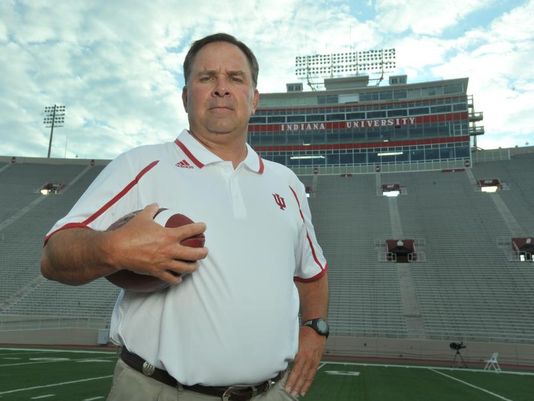 For a number of good reasons, we don’t really delve into recruiting here. First and foremost, regular updates on recruiting targets, visits and commits are provided in great detail by multiple other outlets. Those that do it (Matt Weaver, Alex McCarthy and others) do an outstanding job, and there’s nothing for us to add.

HOWEVA, because the 2016 recruiting class is Kevin Wilson’s sixth, we’re at a point where we can spot certain trends and draw some conclusions – on a macro level – regarding Wilson’s recruiting. And we can make CHARTS to show those trends and support those conclusions, and you know we love us some charts.

As a starting point, who is the “average” Wilson recruit? He’s a 3-star high school kid with about an equal chance of hailing from Indiana, Ohio or Illinois as from any other state. Once he arrives on campus, not surprisingly, he stands a pretty chance of playing at some point in his career. In Wilson’s first five recruiting classes, just under three-quarters of his recruits have seen the field, and a little less than half have become starters. Those numbers are a little skewed by the inclusion

of the 2014 and 2015 classes because we wouldn’t necessarily expect recruits to play, let alone start, in their first two years on campus. Looking just at 2011-2013, then, 82% of Wilson’s players have seen the field and 60% have started.

As the chart on the right shows, however,  those numbers are somewhat inflated by the 2011 class. The 2011 class came into a situation where the cupboard was almost

completely bare and what little talent remained had no connection to the new Wilson regime. So this group had opportunities to start and play that subsequent classes did not. Therefore, the 2012 and 2013 classes are probably more indicative of what we can expect in terms of start and play percentage from a typical Wilson class.

One major complaint from the IU faithful regarding Kevin Wilson’s recruiting is that he doesn’t bring in enough Indiana boys. The above chart shows that about a quarter of Wilson’s recruits have been from Indiana, more than any other state. More Indiana recruits have played and started than recruits from any other state, in raw terms, and the play and start rates for Indiana recruits are on par with the overall figures. Given the amount of Power 5-level talent in the state (maybe 15 guys per year that can play at that level), and the existence of nearby powers like Notre Dame, Michigan and Ohio State, I would argue that IU has actually done ok in-state.

With the exception of 2012, Kevin Wilson has been judicious in his recruitment of junior college players. Going into this year, in fact, Wilson had more JuCo recruits in 2012 (8) than in his other four classes combined (6). This year’s crop of 3 is his largest after 2013, and has the potential to be the most impactful group yet. Richard Lagow is the likely successor to Nate Sudfeld at QB, Jayme Thompson is expected to come in and fill one of the 5 secondary spots in new DC Tom Allen’s 4-2-5 scheme (probably at one of the two safety spots alongside Jonathan Crawford) and Ian Thomas will have every opportunity to earn a spot in the tight end rotation alongside Danny Friend and Jordan Fuchs.

I have mixed feelings about star ratings. People much smarter than me have established a correlation between having a certain number of 4 and 5 star players on your roster and high-level success. That’s all well and good, but it tells us virtually nothing about how we should evaluate IU’s less-than-blue-chip recruiting. While I don’t have any research to back me up on this, my gut tells me that the line between 2 and 3 star recruits – more IU’s speed – is much blurrier than the line between 4 and 5 stars or even the line between 3 and 4 stars.

What I can say is that two-thirds of Wilson’s recruits have been 3-stars on Rivals and of those, 75% have played and just under half (49%) have become starters. Of Wilson’s 32 2-star recruits from 2011-2015, 66% played and 34% started. Of the 7 4-stars, all but one has played[ref] And the 7th, Tim Gardner, is likely to see the field in 2016.[/ref] and 4 (57%) have started. Based on those numbers, there appears to be a modest correlation between star ranking and the likelihood that a given recruit will play or start.[ref] Obviously, the small sample size for the 4-stars gives me pause, but the greater numbers of 2 and 3-stars makes me confident that some correlation exists.[/ref]

In terms of year-to-year, the 2016 class’s percentage of 2-stars (33%) will be the highest since Wilson’s inaugural class (39%). And, at least according to Rivals, the 2016 class is Wilson’s second consecutive class without a 4-star, and third out of his six classes.

The recruits that have turned out best for Wilson – Latimer, Coleman, Sudfeld, Spriggs, Feeney – have all been 3-stars, but it’s worth pointing out that future NFL pick Jordan Howard was a 2-star recruit when he committed to UAB.

This chart helps explain why IU has had to resort to walk-ons at receiver and tight end over the past few seasons. Out of 17 receiver recruits, only 6 have started, and out of 5 TE commits, only 1 has started. When your scholarship players aren’t working out, you need walk-ons to step up. On the defensive side, there have also been some significant swings-and-misses at linebacker and defensive line. For the defensive line specifically, I would argue that the lower starting percentage is a product of a core group (Mangieri, Shaw, Latham, Green, Rayner and Richardson) that have sucked up most if not all of the available starts over the past three years. That will all change in 2016.

My thought before I compiled this list was that guys from farther away would be more likely to wash out. At least in the Wilson era, that has not been the case. Of the 20 non-early-entry washouts, 6 were from Indiana (30%), 5 were from Ohio (25%), and 1 (5%) was from Illinois. In total, 12 of the 20 (60%) were from in-state or from a bordering state, while only 52% of all recruits from 2011-2015 hail from those 3 states.  25% of the wash-outs were from Florida or Georgia, exactly the percentage of Florida and Georgia recruits overall.

40% of the wash-outs were 2-stars, 50% were 3-stars and 10% were 4-stars. The over-representation of 2-stars makes some sense because the primary reason for departure is lack of playing time, and 2-stars generally find it a little harder to secure playing time at IU.

Looking at the year-to-year retention rate, the 2011 4-year rate, shown in the chart on the left, stands out.[ref] That chart includes early NFL departures.[/ref] One possible explanation is the ample playing time available to that particular class, which may have diminished the pressure to transfer elsewhere to get on the field. The 2012 and 2013 classes are slightly below two-thirds. Going forward, my guess is that Wilson would probably want to do a little better than 65% in 4-year rate, but I don’t think you can expect to maintain that 2011 rate either.[ref] If the 2014 class doesn’t lose another player in the next two seasons (highly unlikely) it will finish with an 88% 4-year rate. While the 2015 class hasn’t lost anybody yet, it would be a major upset if the class was still intact by the end of fall camp.[/ref]

With 2016 Signing Day behind us, the 2017 recruiting period is officially underway. What can all of this data tell us about what the 2017 class might look like? First of all, I would be shocked if the in-state percentage didn’t tick back up to at least the 20% range for next year’s class.[ref] It’s at 33% right now…1 of 3 commits, Bryant Fitzgerald from Avon.[/ref] That uptick is likely because of some combination of Tom Allen’s Indiana ties, K Dub’s improved standing in the state by virtue of a bowl game and a contract extension, and plain old regression to the mean. Don’t expect IU to ease up on recruiting Ohio or the Southeast, however. If any aspect of the 2016 class is unlikely to be repeated in 2017, it’s the 3 recruits from Texas. That group doubled IU’s haul from the Lone Star State in Wilson’s previous 5 classes. At this point, I just don’t view Texas as a sustainable pipeline to IU.

In terms of stars, I would be surprised if IU’s 4-star drought (according to Rivals) extends to a 3rd year, and I expect the 3-star rate to go back above 70%.  With respect to position, get ready for a bunch of defensive linemen and linebackers, probably at the expense of DBs. Offensively, expect the O-line pipeline to continue and look for Wilson’s staff to aim high at the wideout and running back spots.

Finally, I don’t think IU will need to dip into the JuCo ranks too much in 2017, but there may be a defensive lineman or linebacker to be found. I would set the O/U at 2.5 JuCo recruits and I would lean towards the under.