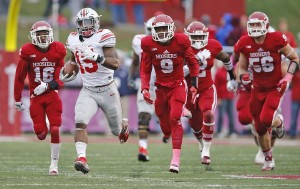 In part 2 of examining the defensive breakdown, we split things out between rushing and passing plays.  If you haven’t read part 1, click here.

If you remember from last week, the decrease on the right side of the graph, particularly after the 90th percentile indicates that Brian Knorr’s first year defense improved the most by limiting the frequency of big plays allowed.  Certainly I didn’t say elimination as there were still plenty of explosive plays, but in general the 2014 defense performed better in this aspect over the 2013 debacle. 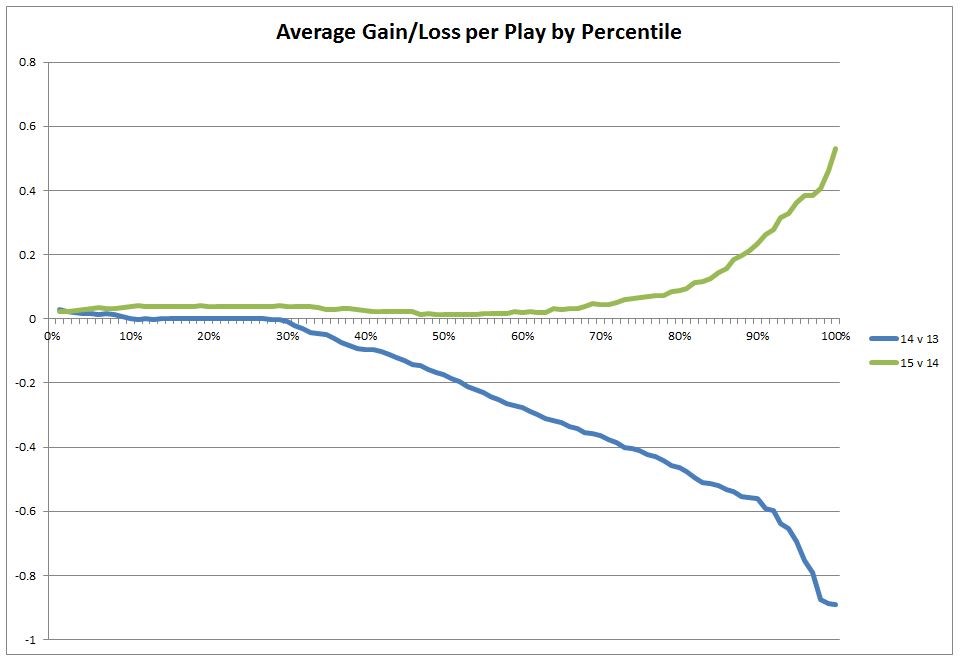 The 2015 comparison to 2014 is nearly the opposite.  The significant increases on the right side of the graph indicate that the Hoosiers were plagued by big plays, although not quite to the extent of the Doug Mallory-led defense, and another defensive coordinator change ensued.

In breaking the data into rushing plays and passing plays[ref]Sacks and undesigned QB scrambles are considered passing plays[/ref] we can truly see where the 0.53 yards per play increase occurred. 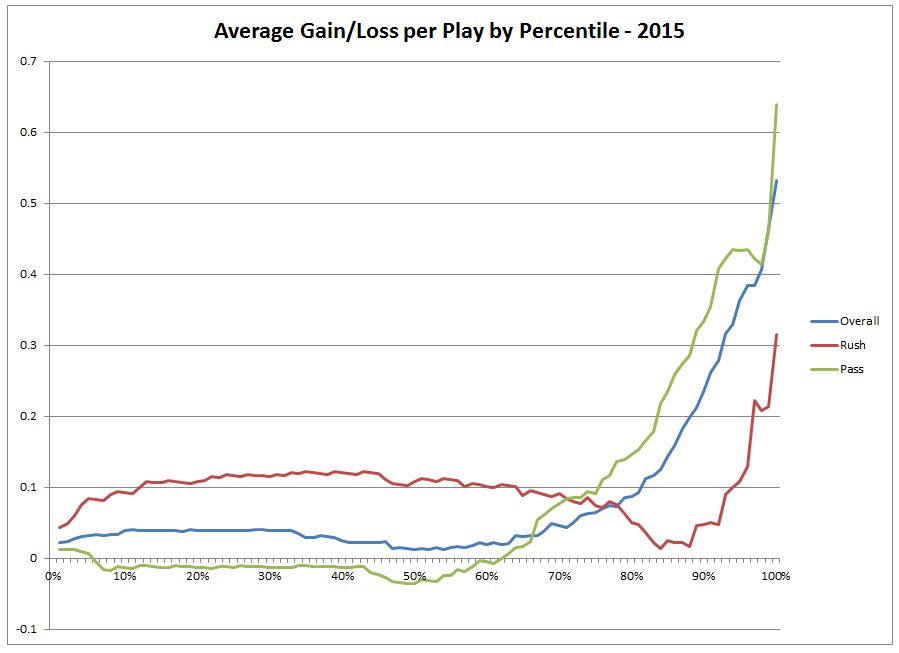 First let’s look at the rushing which showed mild regression compared to 2014.  The defense had fewer tackles for loss which led to a slightly higher average yards per rush allowed early on.  For most of the first 50% of rushing plays, IU allowed 0.1 yards per play higher than the previous season.  In the grand scheme of the Indiana defense, that isn’t a big deal.  In fact, at the 88th percentile[ref]Meaning the lowest 88% of plays[/ref] the Hoosiers were at nearly the same pace as 2014.

Hypothetically speaking, let’s just say the Hoosiers held Ezekiel Elliot to just 5 yards instead of his 65 yard run and Thomas Sirk to 5 yards instead of his 73 yard run.  That would have gotten Indiana right back to where they were in 2014.[ref]If you watch the plays again, it is probably more likely that they each go for 5 yards instead of 65 and 73.  Indiana had players in position to make the play each time, they just didn’t perform.[/ref]

In short, Indiana still allowed too many big runs last year.  The Hoosiers were tied at 125th with 8 rushes of 50+ yards allowed.  However, in looking at the 0.3 overall increase it really comes down to not executing on 2 plays.

On the passing side, due to more sacks and a lower completion percentage allowed,[ref]Thus a higher frequency of pass plays going for no gain[/ref] Indiana allowed a lower yards per passing play up until the 62nd percentile.

Finally, it wouldn’t be Indiana if we weren’t talking big plays.  The progress that Indiana made in 2014 to limit these large gains was erased on top of the intermediate pass regression.  The highest 1% of pass plays had an average gain of 71, up from 59.  Indiana ranked 125th in 70+ yard passing plays allowed with 6 compared to just 2 in 2014.  Think about that.  The Hoosiers went from allowing 139 yards on plays of 70+ to 425 yards.

So what happened?  The 3-4 system that helped the 2014 progress was still in place.  The coaches were still the same.  As Indiana entered the 2015 season the biggest question mark was the secondary and the worst case scenario came true.  The 2014 version had limitations but they were experienced and serviceable.

At safety the trio went from Mark Murphy, Antonio Allen, and Chase Dutra to an injured Chase Dutra, Jonathan Crawford, and Jameel Cook.[ref]Not to mention when we got into Tony Fields and Will Dawkins[/ref]  Allen’s weakness may have been pass coverage, but he was still a former 4 star recruit with plenty of potential.  Murphy didn’t have the pure physical abilities possessed by some of the 2015 safeties, but he was a senior with a steady presence that was sorely missed.  Dutra gained solid experience rotating with Murphy at field safety, which seemed beneficial for 2015 until his injury-marred season forced the Hoosiers to start true freshman Jonathan Crawford and sophomore Kiante Walton in the season opener.  Following a season-ending injury, Walton turned into true freshman Jameel Cook then back into Chase Dutra for a period of time.  Then Dutra was injured again along with Cook and Will Dawkins took over with Tony Fields backing him up.

In essence, for different reasons, Indiana went from ending the 2014 season benefiting from the experience of Antonio Allen and Chase Dutra with unproven players available to rotate in under a reserve role to having the unproven players starting with less-talented, unproven players backing them up.

While not totally attributable to Dutra’s absence, I don’t think it is coincidental that 6 of the top 8 biggest passes[ref]And the only pass plays that went for 50+ yards[/ref] that Indiana gave up were in the first 3 games.  Four of them occurred during the Southern Illinois and FIU games that Dutra sat out due to injury.  Two were in the Western Kentucky game that he was limited in and only 1 of these occurred while he was actually on the field.  It was a deep pass to Jonathan Crawford’s side of the field that true freshman corner Devonte Williams was beat on.  The last 2 occurred in the Rutgers and Michigan games

At cornerback the trio of Tim Bennett, Michael Hunter, and Rashard Fant didn’t force turnovers and gave up a lot of quick passes.  But just comparing that trio to the Fant, Andre Brown, Devonte Williams, Tyler Green, Ben Bach, Leon Thornton group and you can see a huge difference in both quality and experience.  Yes, Fant improved in 2015 to the level of a #1 CB, but the drop-off was significant on the #2 and #3 CBs.  So much so that as the season progressed, opposing offenses were just targeting the wide receiver opposite Fant.

The good news is Fant and Dutra are back to anchor 2 of the 5 secondary positions in Tom Allen’s 4-2-5 defense.  Jonathan Crawford displayed potential in his freshman season that should carry over into his second year.  That leaves the boundary cornerback position and “Husky” position to fill.  In a perfect world Wesley Green, a South Carolina transfer, locks down the corner position with someone like Jayme Thompson, a JUCO and former Ohio State player, securing the Husky position.  By having solid starters, you start to see a trickle-down effect that improves the entire position group.  In this case, players that saw solid minutes in 2015 and even started several games, would be backups, available to rotate in for the normal third to half a game.

That would be a best case scenario which is rare when talking about the IU defense.  However, even if no one is able to seize the starting boundary CB and Husky role,[ref]And we should probably be cautious on Green and Thompson considering neither has ever played Division 1 football.  Even Jerimy Finch saw limited playing time at Florida and we all remember how that worked out.[/ref] the Indiana secondary should benefit from having a healthy Dutra for the season.