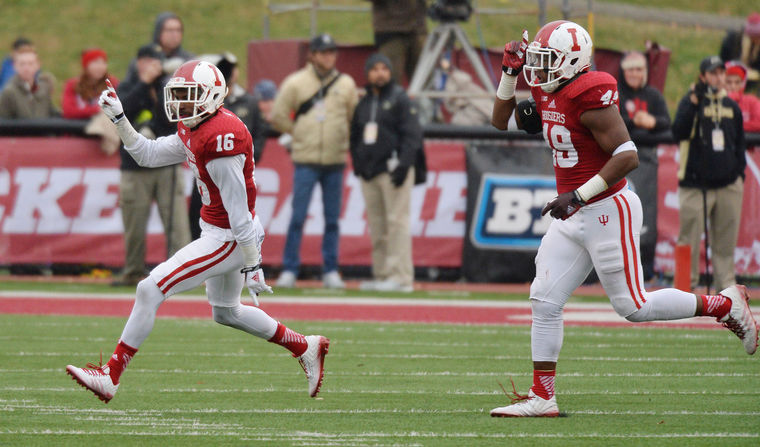 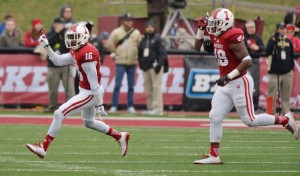 Spring Football is here! It’s time to update the defensive depth chart and analyze how the returners fit into Tom Allen’s new 4-2-5 scheme.

The focus of today’s post will be on defensive personnel as spring practice kicks into gear. In order to have this discussion, we need some understanding of the various positions in new defensive coordinator Tom Allen’s 4-2-5 and the basic responsibilities for each, but I won’t go into great detail about the 4-2-5 in this post.  If you’re looking for a more in-depth breakdown of the 4-2-5, go here, here, or here.

The positions in the 4-2-5 are described briefly below, and the measurables for the player who started at that position for Allen’s defense last year at USF and for the 2014 Ole Miss defense for which Allen was the linebacker coach are also listed.

Weakside defensive end (“WDE”) – Quickness and length appears to be valued over mass. Should be the best pure pass rusher on the DL.

Nose tackle (“NT”) – Quick and disruptive, seems pretty similar to the NT role in Knorr’s 3-4, in that both are one-gap disputers.

Defensive tackle (“DT”) – Should be the best all-around DL on the team. Must take on double-teams.

Strongside defensive end (“SDE”) – More of a run-stopper than the WDE—and accordingly should be a little heavier—but should have some pass rushing prowess as well.

Middle Linebacker (“MLB”) – Stopping the run is his primary duty. Coverage skills are secondary. Size, strength and instincts are valued over speed.

Weakside Linebacker (“Stinger”) – Has significant run-stopping responsibilities, but also must be solid against the pass and an effective blitzer. Speed and quickness is a must, and size can be sacrificed.

Hybrid safety/linebacker (“Huskie”) – More of a safety than a linebacker. Functions very much like a nickel back, with significant coverage responsibilities and run-contain duties.

Strong safety (“SS”) – More deep zone responsibilities than a strong safety in other systems because the Huskie and Free Safety frequently have run-contain assignments that force them to attack the line of scrimmage. Still, must be ready and willing to come up and make a tackle.

With those positions in mind, let’s look at the defensive depth chart as a whole, and then I’ll drill down into specific position groups. The depth chart involves a significant amount of guesswork based on how I think last year’s parts fit into Allen’s system. No incoming freshman are included. Bona fide starters from previous seasons are shown in green[ref] Guys that were forced into starting roles by injury or suspension are not included. Think Will Dawkins, Leon Thornton, Kiante Walton, etc.[/ref] Guys that saw playing time, some of it quite significant, are in yellow. Players that have yet to see the field are in red. If you think someone is in the wrong spot, read on and I’ll attempt to explain my placement decisions.[ref] Then you can tell me I’m wrong.[/ref] 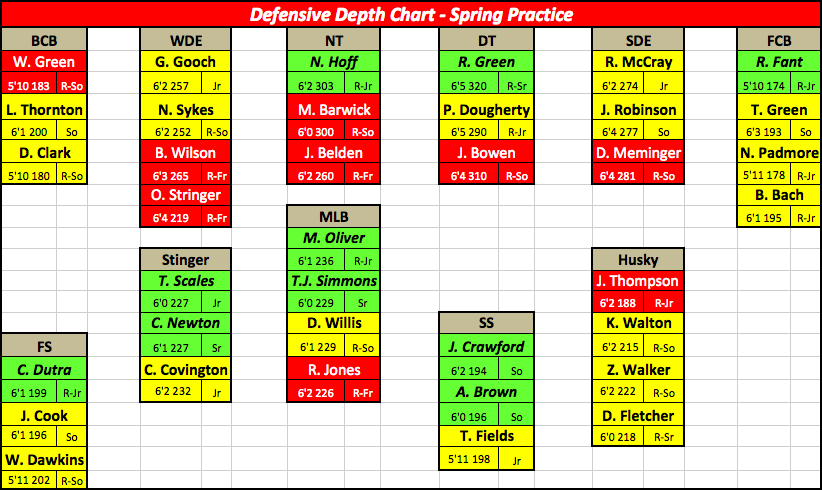 For each position group, the first issue to address is the raw number of players needed at that position. When determining the necessary number of players in a given group, we’re using 44 as the total number of scholarship players on defense. That’s a little more than half of the 85-scholarship total, but since IU almost never substitutes at quarterback or on the offensive line and almost every defensive position substitutes, a few extra defensive scholarships are justified.[ref] And Kevin Wilson’s offense has shown a knack for incorporating walk-ons at skill positions.[/ref] To calculate the total for each group, then, we take the percentage of the starting total at that position (i.e. for the D-line, that’s 4 of 11 or 36%) and multiply that percentage by 44. Using that formula, IU would expect to have 16 D-lineman, 12 safeties (counting the Huskie as a safety), 8 cornerbacks, and 8 linebackers.  Once the raw numbers are evaluated, the next issue is how the existing pieces fit into the new scheme.

As recently as last week, there were officially only 12 scholarship defensive linemen, and that number assumed that 3-4 Bandits Greg Gooch, Nile Sykes and Brandon Wilson would be considered defensive ends and that former offensive lineman and University of Cincinnati transfer Ja’merez Bowen’s bowl practice switch to the defensive line was permanent.[ref] Both of these assumptions were confirmed by Friday’s roster update.[/ref] It stood to reason that another body or two would be added during spring ball. Sure enough, when the updated roster was released on Friday, redshirt freshman Omari Stringer – originally recruited as a linebacker – was listed as a defensive end. Given the premium put on long, quick guys at weakside defensive end, Stringer, at 6’4, 219, is a natural fit.

Once 2016 recruits Jerome Johnson and Allen Stallings arrive in August, the defensive line will be close to full strength at 15, which I’m guessing the staff is probably comfortable with for 2016. If they wanted to move another player currently on the roster, junior linebacker Chris Covington would make sense. He has the size and frame for WDE (6’2, 232), and he’s  currently buried at Stinger.

In terms of roles within the defensive line, there’s a bunch of different ways the coaching staff could go.  Defensive line is fairly unique as a position group in that these large humans can gain or lose 20 pounds or so that can make them a better fit at a given position along the line.  This gives the coaches some flexibility in moving guys from defensive end to defensive tackle, from defensive tackle to nose tackle, etc.  My theory in putting together the DL depth chart was to start the best four guys, while still respecting positional roles in the 4-2-5. If the defensive tackle is supposed to be the best player on the DL, that’s Ralph Green.  He could play nose tackle as well, but Nate Hoff’s skillset fits well there. Jacob Robinson and Robert McCray should be co-starters at strongside defensive end, as both have the size to stand up against the run and enough speed to rush the passer.  On the weakside, I don’t think there’s a true speed rusher on this roster, but the combination of Greg Gooch and Nile Sykes can be solid, if not spectacular.

Looking to the 2nd and 3rd teams, there’s potential to burn, with the underclassmen quintet of Ja’merez Bowen, Brandon Wilson, Derrian Meminger, Mike Barwick and Joe Belden all seemingly ready to take on expanded roles. IU needs a solid rotation of at least 8 defensive linemen in place by the start of B1G season. A somewhat soft first 3 games affords the defensive staff some time to evaluate in game situations.

At the other end of the experience spectrum, the IU linebacking corps. IU has 4 guys that have logged significant time (TJ Simmons, Marcus Oliver, Tegray Scales and Clyde Newton) and a couple guys with a little experience (Damien Willis and Chris Covington). Clyde Newton and Chris Covington played an outside linebacker position in the 3-4 that really doesn’t exist in the 4-2-5[ref] Because the Huskie position is more like a safety than a linebacker. Redshirt senior Dawson Fletcher also played SLB last year, but at his size, I’m guessing that he slots in at Huskie instead of moving inside to Stinger.[/ref], but I think both have the skillset to play Stinger in Tom Allen’s system. Add in redshirt freshman Raekwon Jones and we’re up to 7 linebackers. Barring injury, IU should be fine with 7 linebackers in 2016, especially considering that some combination of Oliver, Simmons, Scales and Newton will see virtually all of the playing time.

With respect to roles, T.J. Simmons, in size and skillset, fits the profile of a MLB in the 4-2-5 to a tee so I expect him to remain there, but the tougher question is what happens to Marcus Oliver. He’s the right size to play MLB, but could he lose a few pounds and play Stinger? Maybe. He has more skill against the pass than Simmons, but he seemed a little overbulked in 2015 and could stand to lose 10 lbs or so.[ref] Based on the updated roster, Oliver has shed a few lbs already.[/ref]

Tegray Scales should excel at Stinger. If I’m picking one guy who should thrive in the new system, it’s Scales at Stinger, especially if he slims back down to his 2014 playing weight (which was maybe 10 lbs less than his 2015 weight). Clyde Newton is in somewhat of a tricky spot, as he will be asked to move inside to Stinger in his last year of eligibility.  At the worst, though, Newton will be an experienced reserve in 2016.

There’s depth, experience, size and talent here. IU’s linebackers should be the strength of the defense.

At safety, assuming former undersized SLBs Zeke Walker and Dawson Fletcher slide to Huskie[ref] Walker is already listed as a DB on the updated roster, even though he’ll be held out of practice this spring. Fletcher is still listed as a linebacker, but I’ll believe it when I see it.[/ref], there are currently 9 scholarship safeties, and all but JuCo transfer Jayme Thompson have seen game action. With 3 incoming safety recruits – in addition to Thompson – (Khalil Bryant, Marcelino Ball and Brandon Drayton), the 3 safety positions should be fully staffed by August. Right now, I also have Andre Brown listed at strong safety because I think his size and physicality – and lack of high level speed and quickness – play better at safety than corner, but the numbers might dictate that he stays at corner, especially now that Devonte Williams has moved back to running back.

Like the D-line, who ends up at which safety position is a guessing game at this point. The positions in the depth chart above are based on (1) Jayme Thompson’s statement during a recent interview that he was working at the Huskie and free safety positions and (2) my rough understanding that in the 4-2-5, the strong safety is more likely to have deep zone coverage responsibilities, while the Huskie and free safety are more likely to have force/contain responsibilities in the run game. Based on his play last year, it seems to me that Jonathan Crawford is more suited to strong safety, coverage-heavy role, while Chase Dutra is a little better suited to a more run-centric role, at whichever spot Thompson doesn’t occupy. The reserves follow the same principle – I think Kiante Walton, Dawson Fletcher, Zeke Walker and Will Dawkins fit well in the run and short zone Huskie or free safety role. Jameel Cook, Tony Fields and Andre Brown could probably fit in any of the 3 spots.

The analysis is simplest at corner: it’s Rashard Fant at one spot and…someone else at the other. My best guess is South Carolina transfer and former 4-star recruit Wesley Green will be the other starting CB, but there’s a group of alternatives with playing experience, including Leon Thornton, Tyler Green, Noel Padmore and Ben Bach.[ref] I have Donovan Clark on the depth chart, but at this point, I don’t think we can count on Clark contributing in 2016. He missed all of 2015, and he’s still out this spring. Also, because he played fairly regularly in 2015, I’m counting Ben Bach as a scholarship player for 2016.[/ref] With freshman A’Shon Riggins joining that group of 7, this position group should be at full capacity in 2016.

Look for an updated offensive depth chart and personnel analysis next week.