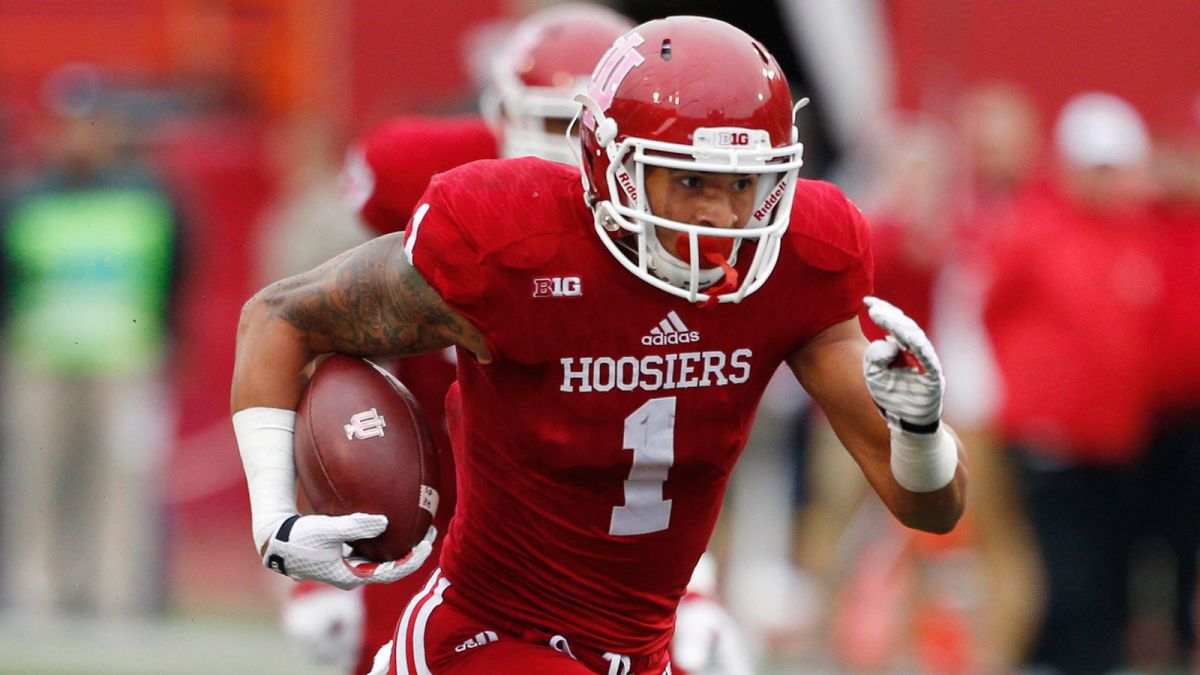 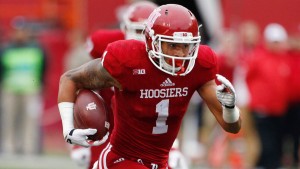 Just like the defense, the IU offense has plenty of questions that need to be answered by the time September rolls around.  Unlike the defense, we have every reason to be confident in the gentlemen tasked with coming up with the answers.

Because the Kevins have implemented a relatively simple yet prolific system and have cultivated a culture of success, IU fans need not worry about the coaching staff or the scheme. Instead, we should focus our collective angst on the gaping holes at quarterback, left tackle and center left by the graduation of Nate Sudfeld, Jason Spriggs, and Jake Reed.

Without further ado, my take on the current depth chart for Kevin Johns’ offense.

Again, green indicates an established starter, yellow indicates a player with some playing experience, and red marks a player who has yet to see the field.[ref] At that particular position. Brandon Knight played a bunch at tight end last year, but he has no experience at left tackle, where he projects to start in 2016.[/ref]

In the Defensive Depth Chart Update, I allocated 44 of IU’s 85 scholarships to the defense, leaving 41 for the offense. To assign scholarships to position groups on defense, I used the percentage of players from that group in the starting 11 and then multiplied that percentage by 44.  On offense, it’s a little trickier because not all positions on the offense substitute. For example, applying the same formula to the offense, 19 of the available 41 scholarships would be allocated to the offensive line. That’s a few too many because the offensive line hardly every subs. If you only need 5 players a game, it’s hard to imagine a scenario where you would need 19 linemen.  Likewise, the quarterback almost never substitutes, while running backs, tight ends and wide receivers in the Kevins’ offense substitute fairly regularly. With that in mind, the somewhat arbitrary desired position group numbers are 4 QBs, 6 TEs, 5 RBs, 11 WRs and 15 OL.

In terms of overall numbers, the four incoming freshmen (Coy Cronk, Mackenzie Nworah, Ryan Smith, Grayson Stover) will bring this group up to 15, the figure matching my mostly arbitrary total.

Three of the five spots on the O-line will almost certainly be filled by returning starters. All-World Dan “The Dude” Feeney will be at right guard, Dimitric Camiel will be at right tackle and one of Wes Martin or Jacob Bailey — both of whom started games at that position in 2015 — will man the left guard spot.

At left tackle, K Dub has made it clear that the job is Brandon Knight’s to lose.  Because the coaching staff thought highly enough of Knight as a true freshman to move him to a different position just to get him on the field — and then he excelled at that position — I’m guessing Knight will be just fine at left tackle.

At center, the most likely candidate is 5th-year senior Wes Rogers. He backed up Jake Reed last year, and he’s seen occasional action the last few seasons. Rogers apparently waffled a bit before ultimately deciding to come back for his final year of eligibility. While I doubt the Kevins guaranteed Wes anything, I also doubt he would have come back if he didn’t think he was likely to start. Of course, that doesn’t mean he will. Among the other candidates are Wes Martin if he isn’t at left guard, redshirt freshman Hunter Littlejohn or fellow redshirt freshman Simon Stepaniak.

By all accounts, Tim Gardner is a starter-quality player who could fill in at any tackle or guard spot that happens to open up.

For not losing a single player that came to IU on scholarship, there’s a pretty gaping hole here.  At the moment, IU only has three scholarship tight ends, Danny Friend, Jordan Fuchs and Austin Dorris.  That trio has a combined for 0 career starts and only Fuchs and Friend have seen the field.  And both Fuchs and Friend have battled injuries.  The overall numbers will be improved after 2016 recruits Ian Thomas and Shaun Bonner arrive, but five scholarship tight ends still seems a little light to me, at least if the Kevins plan on using two-TE sets as much going forward as they did in 2015 (which was quite a bit).

One additional player that Wilson mentioned a few weeks back is walk-on and former linebacker Ryan Watercutter.  Tight end is clearly a position where the Kevins feel comfortable using a walk-on, and it could very well be that Watercutter becomes 2016’s answer to Michael Cooper and Anthony Corsaro.  At 6’2, 227 lbs, Watercutter is on the small side for a B1G TE, but if he can add another 10-15 lbs by September, given the limited numbers and injury concerns of Fuchs and Friend, there certainly seems to be an opportunity for playing time.

What a difference a year makes.  This time last year, most IU fans (including me) were very concerned about the state of IU’s wide receiving corps.  That concern bumped up to something bordering on panic in August when J’Shun Harris went down with a season-ending injury and JuCo prospect Camion Patrick was ruled ineligible.  Then the season started, and we quickly realized that our (my) panic was overblown because Ricky Jones, Simmie Cobbs and Mitchell Paige were a perfectly capable—and at times, truly outstanding—trio.  IU’s three-headed WR monster combined for 171 catches, 2,625 yards and 15 TDs.[ref] In our defense, it was virtually impossible to see this coming. Coming into last season, Jones and Cobbs had caught a combined 11 passes in their careers, for 174 yards and 0 TDs. Paige had never caught a pass before last season.[/ref] Nate Sudfeld’s outstanding play unquestionably helped, but these guys also stepped up in a major way. And all three are back for 2016.

Because the Kevins like to play at 6-8 receivers in a given game, depth is key.  J’Shun Harris should see significant time in the slot, and could conceivably push Paige back to the 2nd team.  Nick Westbrook came on strong at the end of 2015 and appears to be a lock to back up Cobbs or Jones at one of the outside receiver spots.  After those two, however, the situation is a little murky.  After missing 2015 due to injury, former 4-star recruit Dominique Booth should compete for playing time with a pair of Isaacs (Griffith and James) that missed all or part of 2015 due to injury. Luke Timian appears poised to fill the Andre Booker/Damon Graham role of talented walk-on that you expect the scholarship guys to beat out eventually, but who ends up earning significant playing time.

Marqui Hawkins is another guy that could push for playing time at wide receiver, but I wonder if the Kevins don’t have something else in mind for him.  He’s up to 230 lbs now on a 6’2 frame. For reference, 6’6 tight end Jordan Fuchs also weights 230. Could Hawkins be utilized in more of an H-back role, similar to what the staff seems to envision for 2016 signee Tyler Natee? I’d be interested to hear from anyone that attends an open practice and/or the spring game about how Hawkins is being used.

Coach Wilson has made it clear that Camion Patrick is working with the running backs this spring.  He also mentioned late last season that Patrick might be the best player on the team—a team that included a number of likely NFL draft picks, including a possible 1st rounder in Jason Spriggs.  I frankly don’t believe that Wilson would move one of the best players on the team to running back just to use him as a backup.  So that’s why my depth chart lists Devine Redding, a returning 1,000 yard rusher coming off a huge performance in the Pinstripe Bowl, as the 2nd team running back.  That being said, I envision the split between Patrick and Redding being much closer to 50/50 than was the split between Howard and Redding.  K Dub also hinted that the Kevins might get creative with moving Patrick around to take advantage of his receiving skills so I wouldn’t be surprised at all to see Patrick and Redding occasionally on the field at the same time, something we never saw with Howard and Redding.

Behind Patrick and Redding, sophomore Mike Majette, a converted wide receiver who flashed some raw talent in limited duty last season, is probably next in line.  Redshirt freshman Devonte Williams is also returning to running back this spring, after being moved to corner in August due to dire positional need.  Williams suffered a season-ending injury in September and received a medical redshirt.  According to Wilson, the move back to running back, a position at which he starred in high school, was Williams’ preference.  I expect this year to be primarily developmental for Williams, but you never know what could happen if a few injuries pop up.

Not listed on the depth chart are two walk-on backs that saw significant action last season, redshirt-sophomores Ricky Brookins and Alex Rodriguez.  Primarily for space reasons, I left these guys off the depth chart, but if the season started today, I’d expect both of them to get the call before Williams.  I plan to devote a full post to this topic later in the offseason, but it’s really a huge plus for the program to have such talented walk-ons ready to “play on-demand,” to borrow a term from Coach Crean.

In terms of overall numbers at the position, not including the walk-ons, IU should be in fine shape once Kiante Enis (listed as an athlete by recruiting services but expected to start out at RB) and Cole Gest arrive. Tyler Natee also gives them a good short-yardage back option in the coming years.

From a numbers standpoint, the quarterback position is in good shape.  Assuming Donovan Hale sticks at QB, which is where he’s working in the spring, that gives IU five scholarship quarterbacks this spring, with a sixth, Peyton Ramsey, arriving in the fall.

Due to his physical tools and experience in what seems to be a similar system at his JuCo, I would have given Richard Lagow the leg up in the QB competition anyway, but Zander Diamont’s absence from spring practice due to injury makes Lagow’s advantage even more pronounced. Honestly, I wouldn’t be all that surprised to see Austin King or Donovan Hale supplant Diamont as the backup heading into the fall. If that happens, though, we could see Diamont redshirt in 2016, perhaps with an eye towards a move to slot receiver for 2017 following the graduation of Mitchell Paige. K Dub mentioned that Diamont got some work in at the slot during bowl practice. I’m not saying our plucky Ohio State specialist doesn’t have a future at QB – I’m just saying it doesn’t look great at the moment.

The possible addition of Pitt grad transfer Chad Voytik to this mix[ref] He’s visiting this weekend.[/ref] is intriguing, but I’ll wait and see if he actually joins the program before I delve too deeply into his impact. My initial reaction, for what it’s worth, is that even if Voytik came to Bloomington, I would still expect Lagow to start, in light of his experience in the spring and what seems to be superior physical ability.